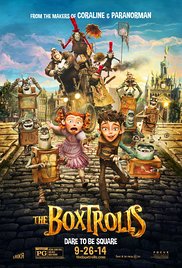 You give a kid a flashy brand-name mechanical toy, but he’ll have more fun playing with the box. As that old truism goes for kids, perhaps it’ll prove just as true for filmgoers. In 2014, Transformers: Age of Extinction – the massively branded, biggest, shiniest movie based upon popular mechanical toys – demonstrated a noteworthy drop in popularity in comparison to its more financially successful predecessors. While still technically a hit, the reception that greeted this fourth Transformers film made very clear that the newness has worn off, and the culture is moving on.

Enter Oregon based stop-motion animation studio Laika with the box. And a swell box it is… For good measure, the movie itself is full of actual cardboard boxes, and of course has “box” right there in the title. The Boxtrolls presents as a dark, old world charmer overflowing with contemporary ideas, humor and pacing. Upon immediate engagement, it does not disappoint. Meticulous to the nth degree, there’s no denying the artists and technicians at Laika (one suspects that they are often one and the same) their many, many deserved accolades for their work on this darkly tinged delight. And, though these boxes are branded – Eggs, Fish, Shoe, etc. – it can be chalked up to truth in advertising: The trolls are named for the labeling of the boxes they wear.

Grown-up animation fans will swoon for The Boxtrolls, and that should be enough to justify its existence. But perhaps unfairly, Laika’s success will be measured against that of Disney and Dreamworks. Meaning that a big question is, will kids really like The Boxtrolls? Many will. And many more will not – the sense of eeriness and plasticine dread will not agree with them. Such was the case with the similarly impressive and more moving ParaNorman a couple years ago, and was compounded all the more with their respectable but decidedly nightmarish Coraline in 2009. These are the prime achievements to date of Laika, the world’s premiere exclusive stop motion animation studio. It has, in its brief lifespan, carved a surprisingly comfortable thematic niche for itself by specializing in the giddy macabre. 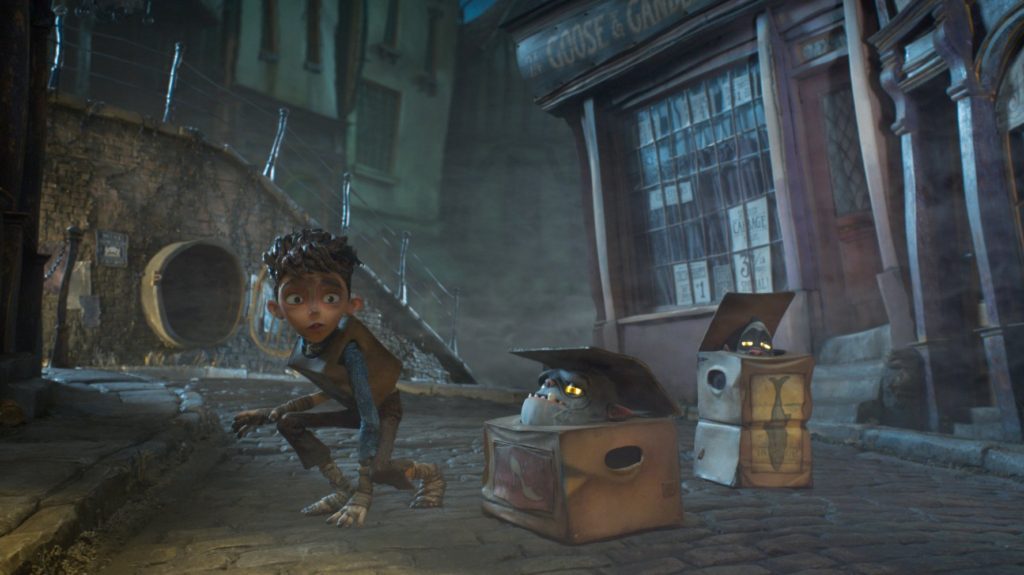 However, if one were to replace “giddy” with “off-putting”, one might begin to fathom the unfortunate first impression leveled by a great many upon their filmography. And while there’s no denying that there’s something about stop motion that simply lends itself to childlike gruesomeness fascination, one would hate to see an outfit as brilliantly skilled and invested in their craft as Laika have to close up shop due to lack of major success. As much fun as it it, Laika can never hit Pixar success territory with a steady stream of spooks. (Even Laika’s obvious ground zero, the now revered The Nightmare Before Christmas, was not a box office hit.) Boxtrolls once again demonstrates that they have the storytelling and technical expertise to wrangle such success. But doing so with this material would be similar to slipping on eyeballs like marbles through the finish line – crazy unlikely.

Convincingly set in a small fictionalized English township of yesteryear, and well cast with voice actors to match (Ben Kingsley, Richard Ayoade, Nick Frost, Simon Pegg, et al) Boxtrolls begs the question, when was the last time something this British came out of Oregon?? Fittingly, the production itself isn’t the only ugly duckling in play – the main character of the film also fits the bill. The Boxtrolls tells the story of Eggs (Isaac Hempstead Wright) – a young human boy who went missing years ago, presumed killed by his much-dreaded abductors, the boxtrolls. But he was actually lovingly adopted by the boxtrolls, who only benevolently emerge from their Rube Goldberg-ian dwelling (which is all the more impressive in 3D) under the cover of night to collect more treasures for their music-making and inventions. Eggs has known no different life than that of a boxtroll, that is, until a little girl (Elle Fanning) figures it all out, and spills the beans. From here, Eggs must decide his fate, even as a nasty, irrationally power-hungry madman threatens all-around death, destruction, and party crashing.

All of that said, it can’t be overlooked that the personalities and characters suffer in service of the plot, and more importantly, the ideas that the movie is heavily communicating. It’s ironic then, that like a certain giant, clanking, headache-inducing robot franchise, Boxtrolls’ characterization is positively corrugated compared to its purely spectacular visuals. In that sense, it might just be the same base impetus – the desire to experience a highest level of cinema craftsmanship – that drives filmgoers to both films. 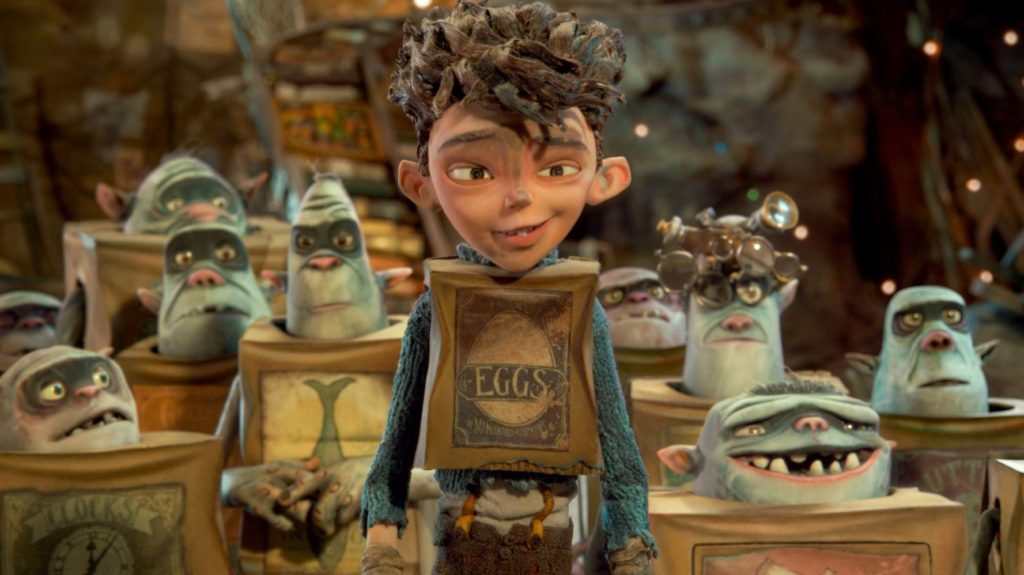 Criticizing Transformers has become the film reviewing equivalent of shooting fish in a barrel, but in this case, it proved too irresistible. After all, the title critters of this film even “transform” a few times, themselves – into box stacks, box stairs, and larger box stacks. It should come as no shock that The Boxtrolls has more ingenuity, more spunk, and more wonder in any one of its old tattered cardboard boxes than any Michael Bay creation has under its hood. It also has far more of a brain – almost to the point of distraction.

Suffice to say, The Boxtrolls isn’t mere eye candy. It’s a smart movie, full of well-thought (perhaps over-thought) sociological and even political statements amid it’s many simpler pleasures. And it won’t let you forget it! Like Romero’s Land of the Dead, most audience members aren’t there first and foremost for the message, but considering the work that’s gone before it, no one has any right to be surprised that it’s there. Honestly it can be said though, the cheese-and-hats based power structure never stops amusing. The one character with any true dimension is the repulsive villain Archibald Snatcher, a mentally-warped troll exterminator, desperate in his power-hungry dejection. He’s the one that will be remembered when the rest of this deeply fastidious film has faded. Despite its shortcomings (which many will read as nit-picking), it remains an easy recommend.

Yet, compared to the similarly themed Ernest & Celestine, a truly madcap and more satisfying, conventionally animated film recently out of France, The Boxtrolls is the overly engineered mechanical toy. Ernest & Celestine, nominated for Best Animated Feature at last year’s Oscars, is a hand drawn effort full of spark, vigor, and jubilant zest. It wears it’s mischievousness unapologetically, even as the societal observations pile up. But with characters, capers, and a storybook aesthetic as charming as it is, all is in balance. It makes the otherwise winning Boxtrolls look utterly boxy.

My eight year old emerged from The Boxtrolls immediately proclaiming that every good action movie needs four things: A beginning, a middle, a bad guy in a huge stomping robot suit, and an end. This film makes his cut, and ditto for his six year old sister. (The bad guy’s obligatory huge stomping robot suit is rather impressive!) Younger children in the audience, however, didn’t take the film so well. I found more levels to appreciate than they of course did, but for most of us, six days out, The Boxtrolls seems to have remained in last week. Although the box is a very good one, complete with its message printed all over it, it alas does not hold long term emotional interest. Here’s hoping that Laika’s next trip to the factory will be even more fun.