The Little Engine That Should… 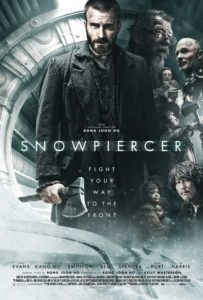 Director Joon-ho Bong makes his English-language film debut with Snowpiercer, based on the French graphic novel “Le Transperceneige“.  In the future, where global warming is threatening our planet, we decide to fight back by releasing a compound into the atmosphere that is supposed to bring the temperatures down to manageable levels.  The plan backfires and the entire planet’s temperature is brought down so much that every living thing is said to have died, except for those who have boarded the “snow piercer”.

The Snowpiercer is a train that is designed by Mr. Wilford (Ed Harris) that has an eternal engine that runs on a world-wide track and is impenetrable to extreme temperatures.  Designed originally for a select group of elites who live in luxury in the front section cars, a group of others are housed in the back cars where poverty and squalor are taking place.  Over the 17 years that the train has run, a class system has developed where those in the back exist, yet are unable to truly live like those in the front section.  Armed guards are always doing head counts, and sometimes taking select kids from the back for purposes in the front cars.  Rebellions, we learn, have been tried, but all have been put down.  Many of those in the back section are missing limbs, limbs that were taken from them as payment for their non-cooperation.

Chris Evans plays Curtis who has been studying and watching, looking for the right time to take the train.  He desires to get to the front of the train where the engine is.  Where Mr. Wilford is.  He wants to effect change.  The tension has been building, and now something has to give.  John Hurt plays Gilliam, an elderly mentor to Curtis, and the defacto leader of the back section of the train.  Curtis is also mentoring a younger passenger named Edgar (Jamie Bell). 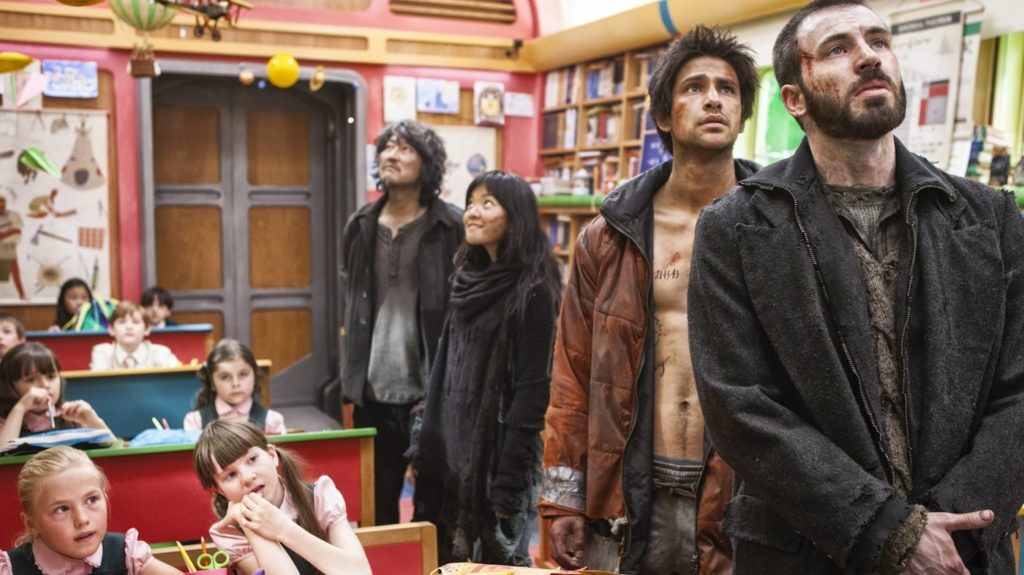 What starts as a simple story, really evolves and takes many turns by the time the film concludes.  Overall, it could be viewed as a class warfare piece against the backdrop of a dystopian society much like we’ve seen in films like The Hunger Games, or Divergent.  And while this is present, it turns out to be such a small piece to the larger narrative.  The story, as it unfolds, turns out to have much more to say that viewers are simply going to have to watch to find out about.

Joon-ho Bong is able to keep many of the twists and turns hidden until the proper time for the big reveals.   With a strong cast composing of both Western actors as well as those from his native Korea, Boon presents a compelling film that is story driven, but that delivers with the action as well.  Each detail, no matter how insignificant it may appear at first, plays a role in the larger story that is happening. 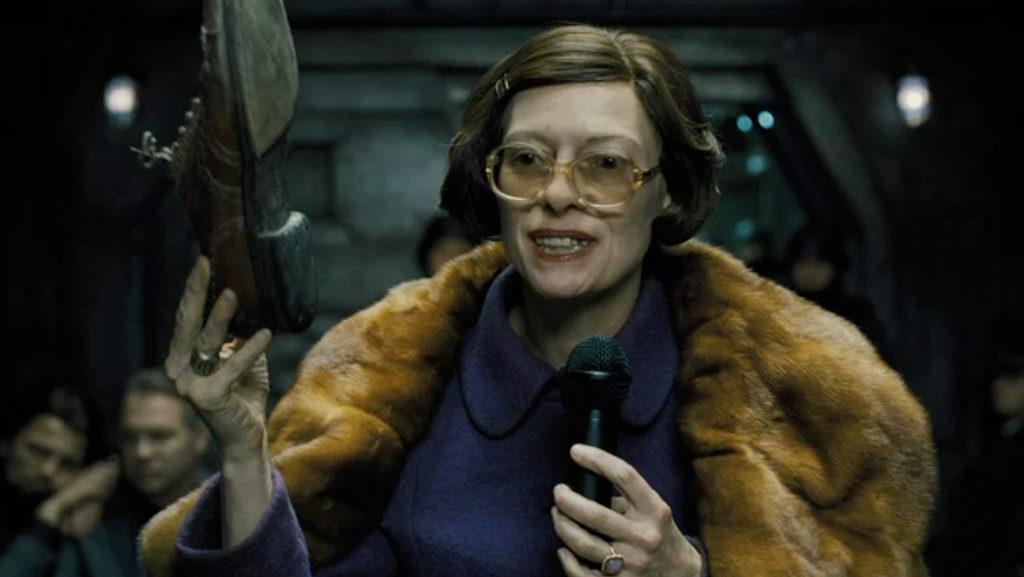 Tilda Swinton does her best Effie Trinket (The Hunger Games), with her odd demeanor, haircut, and over-the-top optimism, even in the face of extreme darkness.  Director Bong decided to keep her character male, as the character is in the book, even though Swinton is clearly a female throughout the film.  It serves as a tribute to the novel.  Octavia Spencer (The Help), Kang-ho Song, Ah-sung Ko, and Alison Pill are also strong in their supporting roles.

One of the more pleasant surprises of the film is a thought provoking narrative regarding freewill and whether or not we all have an assigned place in this world that we are meant to occupy.  In light of the need to survive, and the backdrop of the class warfare that exists on the train (and has always existed in every society) Snowpiercer does a good job of truly questioning our need to accelerate concepts like “survival of the fittest” when it suits our purposes, and ignoring it when it doesn’t.  And while the concept of faith never really enters into the narrative, we do see two opposing arguments being set up with Darwinian implications on one hand, and the train as the Biblical ark carrying us to a new start on the other.  We also are treated to larger character arc, with Curtis, regarding the need to truly sacrifice oneself for others if they are to be leader, much like Christ’s example and his admonition to lead others by serving them. 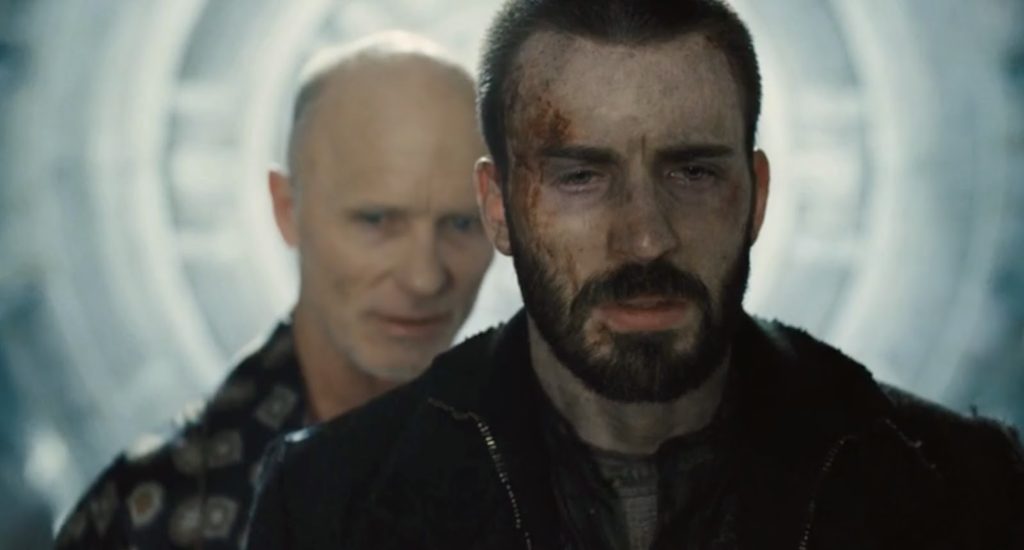 Chris Evans does a great job of subtlety in this film.  He conveys much emotion in both the fast-paced action scenes that remind us that he is Captain America, but in the quieter moments he is also able to firmly destroy the Marvel superhero stereotype he has come to embody.  By the end, his character’s 17 year journey on the Snowpiercer is a tragic, and horrific one, and it is an arc that highlights Evan’s range as an actor that is not often displayed in the larger action films like The Avengers.

Snowpiercer is a strong story, and one of the best action films of the year so far, that will find a very small audience thanks to what I can only see as a grave mishandling of the promotion of this film by The Weinstein Company.  They seem to have done very little to promote this film despite giving it a summer release date.  They have also pitted it against the overly-bloated Transformers film that is coming out this weekend, with only a limited release for Snowpiercer to boot.

I would encourage you to find out where this film is playing near you and make sure that you pay to see it in the theaters if for no other reason that to show The Weinstein Company that this is the type of action movie that truly needs to be made.  One with a strong story, great action, and a diverse cast representing many cultures that will naturally appeal to a global audience. It should be bigger, at the box office, than it ultimately will be.  Should.

So go out and support Snowpiercer, and help make it truly “the little engine who should…”!