I’ll Buy That For Much More Than a Dollar! 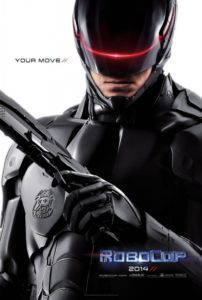 I didn’t really have high expectations for the new Robocop movie.  Tired of reviewing remakes, I dreading writing this review as I waited for the house lights to go down.  All that comparing and contrasting to the original, weighing the value of the remake on its own merits vs. whether it brought anything new to the table; judging it up against the source material, etc., etc.  After a while it can get rather exhausting.

Imagine my delight, then, when I discovered that the new Robocop remake really isn’t a remake at all.  It’s much more along the lines of a reboot/re-imagining (and there is a difference between these three terms, by the way); taking the basic framework of the Robocop mythos and using that foundation to build a mostly original story with new characters, settings, and situations.  Rather than attempting to re-do Paul Verhoeven’s classic sci-fi satire, writer Joshua and director Jose Padilha have opted to treat Robocop like the pop-culture icon he used to be (remember the 90’s, when Robocop was everywhere?) and craft a new origin story for a new generation of Robocop fans.  Which makes the new movie sort of the “Batman Begins” of Robocop, as it were.

Not that Robocop ’14 is as good as Batman Begins, mind you, but that doesn’t mean it’s not good.  In fact, it’s a pretty darn great Robocop movie—especially when compared to every other Robocop movie, TV show, miniseries, cartoon, and TV movie that’s been churned out since Verhoeven’s original.  While it can’t touch that one, it’s easily the best one since. 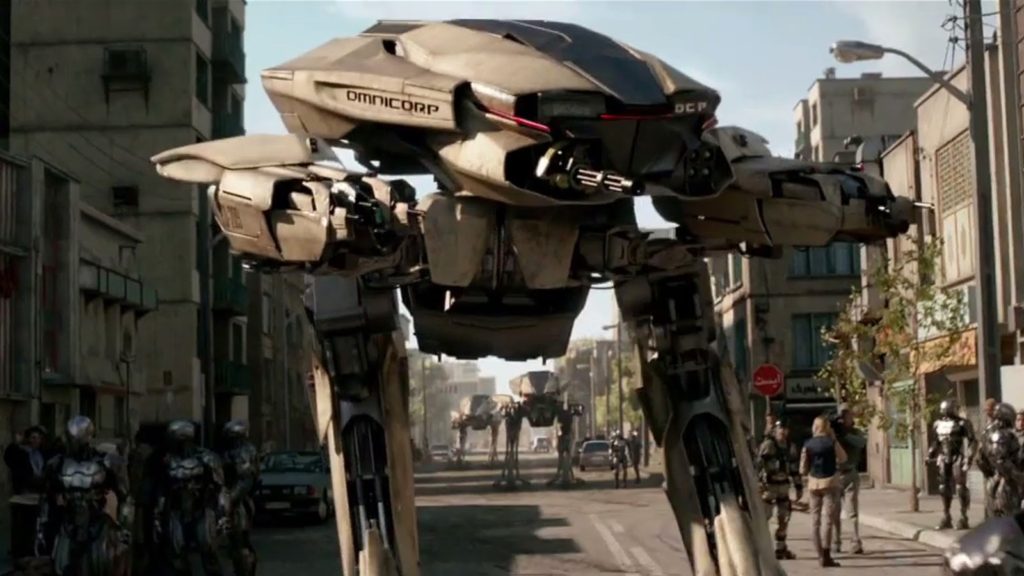 Rumour had it that early drafts of the script were actually a sequel to the original Robocop, which might go a ways towards explaining why this movie stands on its own so well and isn’t dependent on Verhoeven’s film to find its own feet, which is one of the great things about this new version.  These are meant to be two very different movies with very different aesthetics and goals.  Verhoeven’s original was an over-the-top satire that was as much comedy as it was action and sci-fi.  The characters were broad and archetypal, the violence was cartoonishly gratuitous, and it had an in-your-face swagger that was never meant to be taken seriously.

This version is more “science-fiction” than the pulpy “sci-fi,” of the original—looking to the not-so-distant-future to extrapolate possible dystopian outcomes of (among other things) US foreign policy (particularly as relates to the war on terror and US involvement in the Middle-East), drone warfare, the future of robotics and A.I., and the blurring lines between legislative government, corporate oligarchies, and political propaganda packaged and sold as entertainment journalism.  It’s closer to Mennippean satire than the more Juvenalian original, which touched on these issues as well.  But each version puts different emphasis on different topics, making this new film feel refreshingly fresh and original.

I also appreciated that the filmmakers didn’t feel the need to shoehorn too many references to the original into their version—Basil Poledouris’ iconic Robocop hero theme does make several appearances, as do two of the most memorable lines from the original script—one of which feels somewhat natural, and the other forced.  But aside from that, this film really does stand alone.  Aside from Alex Murphy himself, there’s an entirely new cast of characters here:  no Clarence Boddicker (Kurtwood Smith); no Dick Jones (Ronny Cox); etc.  This is a good thing, incidentally—no one was going to be a better Clarence than Kurtwood or a bigger Dick than Cox.

Even Joel Kinnaman’s Murphy is a good bit different from Peter Weller’s Murphy, though not so much as to be sacrilegious.  Weller’s interpretation was a sort of straight-arrow goody two-shoes; his subsequent brutal execution at the hands of remorseless gun-toting thugs was that much more stomach-turning because of the heightened innocence of Verhoeven’s Alex Murphy.  For Verhoeven, Robocop was a bizarre type of hyper-violent Christ figure, something that never computed to me[1].  Thankfully, that’s one element of the character that Zetumer and Padilha have ignored.  Their version of Murphy is no innocent lamb for the slaughter; he’s rougher around the edges.  In this version of the story, Murphy is an undercover detective, hotheaded and impulsive.  It’s a lot like the difference between William Shatner’s James T. Kirk and Chris Pine’s version.  Another difference is that in some ways, this is much more of an origin story.  Whereas Weller’s Murphy was brutally murdered mere minutes into the movie, we spend a lot longer with Kinnaman’s Murphy—getting to know him as a cop, a husband, and a father.  This means that Murphy’s family is much more front and centre this time around.  This not only brings a new level of human drama to the picture, but it also establishes that this movie is wrestling with a very different man vs. machine dynamic:  the original Robocop was about a machine trying to become a man.   The tagline for the movie said “Half man, half machine,” but that was really only half true.  Weller’s Robocop was essentially all machine.   Alex Murphy was truly dead; his face was grafted onto the Robocop in order to make it seem more human.  Kinnaman’s Robocop, however, is a man struggling to hang on to his humanity without losing it to the machine.  He is the other half of the equation—only the barest scraps of his humanity are left (you see just how much in a harrowing and horrifying scene that is as disturbing as anything from the original).  Will he be able to stay human?  This is one of the central struggles, motivations, and arcs of his character.  It’s therefore essential that his family be a big part of that journey, whereas they would have just gotten in the way in the original film.

Also new to this movie is a new roster of jackasses—Michael Keaton, Jay Baruchel, and Samuel L. Jackson are all delightfully douchey, but I particularly enjoyed Jackie Earle Haley as Mattox, a soldier of fortune and robotics expert who is also the world’s biggest jerk, and has nothing but contempt for Alex Murphy.  However, my favourite new character is Dr. Dennett Norton (Gary Oldman), the scientist responsible for the tech that saves Murphy’s life and creates Robocop.  On the page, Norton is one of the biggest problems with the screenplay—he seems to switch allegiances and change his mind on a whim, based solely on what the script needs him to do.  I wonder if Padilha realized this when he cast Gary Oldman, a true rare talent.  Oldman makes up for this deficiency on the page by playing Norton in a constant state of conflict; a man who wants to do the right thing but is forgetting how.  You can see it all happening in the performance:  he’s weighing his Hippocratic Oath against the demands of the company who pays for his research, against trying to do the right thing.  What is best for Alex and his family?  What will keep Alex alive?  Are the two mutually exclusive? 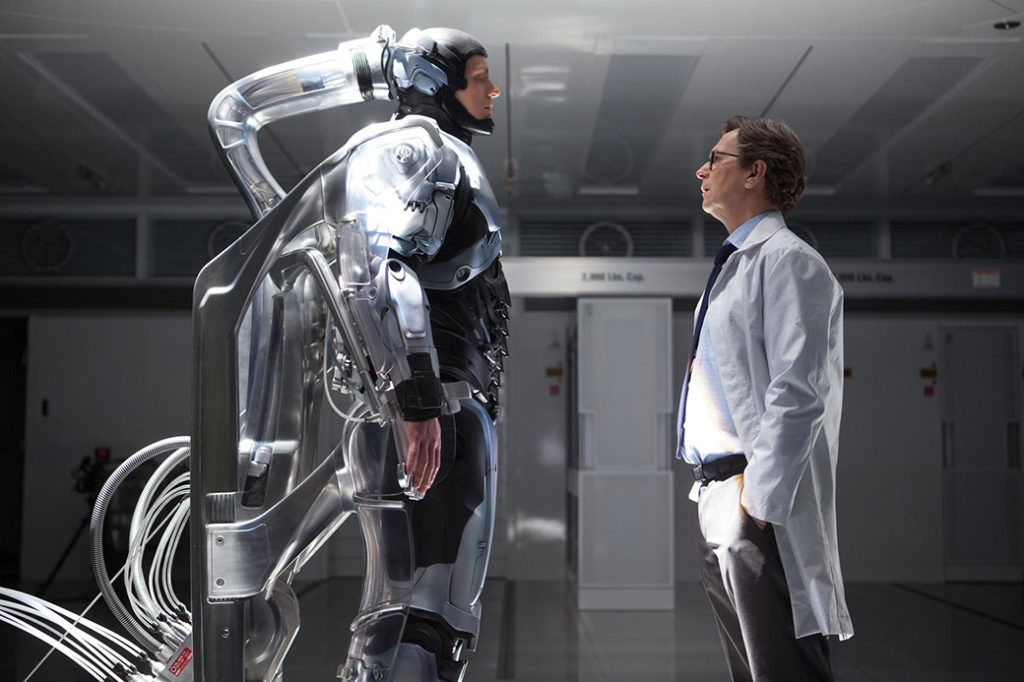 Despite the added drama and character development, Zetumer and Padilha keep the elements of satire and action.  There are some truly exciting moments, such as a chase scene when Alex Murphy first wakes up in the Robocop body, and a climactic battle at the end against a squadron of ED-209’s.  Those who worry about the PG-13 rating can rest assured that it never once occoured to me that I was missing anything that I wouldn’t get in an R-rated version.  Because this is a different type of movie, the gritty urban realism doesn’t necessitate the same gratuitous bloodbath as a hard-R gore-fest.  The Dark Knight didn’t need an R-rating to be effective, and neither does this.  It’s just not that kind of movie, and it doesn’t need to be—it’s fine the way it is, for the most part.

[1] Paul Verhoeven seems to have some kind of weird obsession with Jesus Christ, although he does not believe in Christ’s divinity.  He’s a member of the Jesus Seminar (despite his noticeable lack of theology credentials), has written a book about Jesus, and has said that he wants to make a movie about Jesus.