Another Raunch-Rom-Com is Added to the Mix 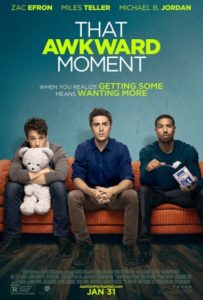 That Awkward Moment delivers exactly what is in the trailer.  Three male friends take an oath to not be in a relationship to bond with one of them who is going through a divorce.  But isn’t it just like love to find you when you are actively trying to avoid it?

Zac Efron, Miles Teller, and Michael B. Jordan are the three bachelors in this latest “raunch-rom-com” seeking to appeal to the mid-20’s crowd.  As is present in any of these formulaic comedies, you will have lots of jokes based on any of the following tried and true gags:

Jason (Efron) and Daniel (Teller) are ad executives for a publishing company who spend their days slacking off and making fun of their co-workers, while still nailing every under-prepared presentation they are given to hook clients.  At night they are soul-less bachelors looking to bed more women than Wilt Chamberlain without caring about the emotional wreckage they leave in their wake.  In fact, any time a girl utters the word “So” as in “So, where is this relationship heading?”, they are quick to bow out of that relationship and move on to greener pastures where they don’t have to be emotionally tied to another human being and can engage in consequence-free sex all night.

When their friend Mikey (Jordan) discovers his wife has been cheating on him and wants a divorce, it is Jason and Daniel who take him out to join their version of “true living”.  Jason and Daniel are the typical wise-cracking and sarcastic friends who have quips for everything (especially Teller), who model how to score for Mikey, but Mikey never seems to want to join their party.  As a result, he is a much more sympathetic character, as he is seeking something deeper having experienced it in his marriage despite its tragic ending.  His journey is more of moving on and finding healing rather than simply filling the void with meaningless encounters.

Jason and Daniel on the other hand stick to true “raunch-rom-com” formula where they seek to live it up and avoid responsibility at all cost only to find love hot on their heels despite wanting nothing to do with it.  They also must learn a valuable lesson that seeks to present itself as a great moral truth that can only be discovered after engaging in a series of raunchy moments that are true to this sub-genre. Examples of their journey towards enlightenment begin with conversations regarding how to pee while sporting the effect of having taken Viagra, to which oversized dildo one should purchase for a party to wear around.  As they each meet a girl who challenges their beliefs on love and relationships, those conversations begin to change, traveling from the genital stage, to the “I’m not gay, but if I was it’d be cool” stage, to avoidance of real talk, then anger that their friend wasn’t real with them stage, to the final stage of acceptance.

Imogen Poots plays Ellie, a book writer who hooks up with Jason casually before realizing he is pitching her book cover at work.  She plays Ellie both quirky and fun and is a bright spot in the film that helps bring Efron’s character along to some greater depth of emotion by the time the film ends.  Efron and Poots have good chemistry together.  And as formulaic as the script is, these two help the film to be greater than what it actually is.

Teller finds a love interest in Mackenzie Davis’ character, Chelsea.  Chelsea is best friend and wing-woman to Teller’s Daniel.  One day their relationship takes a turn and goes from best friends helping each other score with others to hopping in bed together.  Miles Teller could easily see his career become one of the wise-cracking best friend, as he is here, or he could capitalize on his eerily similar look to John Cusack’s Lloyd Dobler in Say Anything, and become a much more substantive actor.

Unfortunately, most of his character in That Awkward Moment seems content to be a facsimile of any Seth Rogan character in a Judd Apatow film than the “charming loser who wins big” qualities of Lloyd Dobler.  That doesn’t have to be a bad thing as he provides some of the big laughs, but since Seth Rogan already owns this market, Teller would be wise to cut a unique path.  His character arc here is actually closer to the character of Mouth in The Goonies who seems pretty shallow but then falls for Stef and seems to mature a bit by the end of the Goonies’ adventure. The difference here being  Mackenzie Davis’ character, Chelsea, as the substitute for Martha Plimpton’s Stef in The Goonies.

Despite the boring, formulaic approach of the script, the typical gags, setups, and dialogue that is prevalent in any raunch-rom-com, there are moments you’ll enjoy.  There are even some potential “cry” moments at a couple of points in the film.  However, in the end, this is a forgettable yarn that will be lost in the sea of many other similarly themed films that can be found at your neighborhood Redbox. Maybe instead you should re-rent Say Anything and The Goonies, both are miles above That Awkward Moment.