A REAPER FOR ALL SEASONS

Every October season, a unique aesthetic hovers in the chilly fall air. Grim skeletal figures, fiendish ghosts, and mummified undead decorate the local areas. Carved and lit jack-o-lanterns line the streets, their ghoulish faces glowing in the night. Bonfires cast apparitions of supernatural beings over the haunted holiday, their presence shadowing us.  This is the celebration of Halloween, and its festivities have clung to me since early childhood. In the spirit of the holiday, various horror film classics are routinely broadcasted on TV and in film series across the country.  AMC’s Fearfest harvests a multitude of movies to marathon up to the 31st. With regard to the large number of great movies being showcased, there’s one distinct film that stands above the rest and resonates on a personal level. Unparalleled in scares and effectiveness, now celebrating its 35th anniversary, is John Carpenter’s Halloween (1978).

Rather simplistic in its approach to plot, Halloween tells the tale of Michael Myers. An outwardly normal young boy who unexplainably snaps, Myers murders his older sister on a cold autumn night in 1963. After spending years of his life in institutional lock-up and being psychoanalyzed by his doctor, Loomis (Donald Pleasance), Myers escapes on the anniversary of his sister’s death to stalk an innocent babysitter (Jamie Lee Curtis) and wreak havoc on Halloween night in his hometown of Haddonfield.

Before 2007’s Paranormal Activity, Halloween was the most successful low-budget horror film. Made on only a modest budget of $325,000, the film went on to gross over $70m, becoming the most prosperous slasher flick of its era. Hired to write and direct by executive producer Irwin Yablans was up-and-coming filmmaker John Carpenter. Carpenter, alongside his future wife Debra Hill, masterminded a story that delved into the sinister mythos of the holiday’s roots. 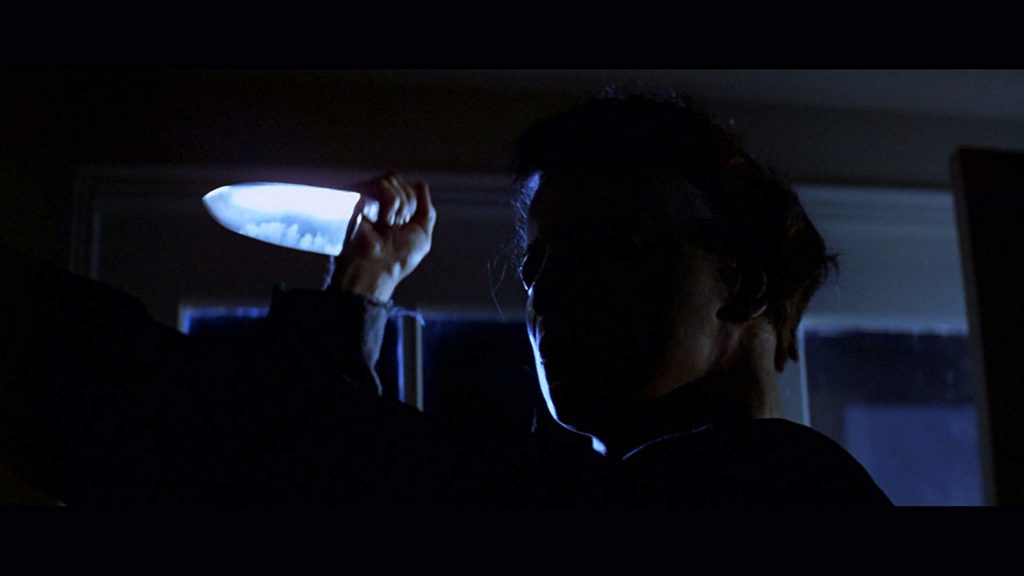 At the center of the story is the indestructible antagonist, “The Shape,” better known as Michael Myers. Doctor Loomis’s frenzied ranting’s about Myers struck fear into the audiences of 1978. In his telling, Myers has manifested himself into something more then a man after a decade of solitary confinement. Being institutionalized for years and withdrawing from all human communicative interaction, Myers has become resigned to his emotionless façade, transforming into something of an empty vessel. Donald Pleasance’s monologues are nearly lyrical in description:

“There was nothing left: no reason, no conscience, no understanding, and even the most rudimentary sense of life or death, of good or evil, right or wrong. I met this six year-old child, with this blank, pale, emotionless face, and the blackest eyes… the devil’s eyes.”

In referring to Michael as “it”, not “he,” Loomis characterizes Myers’s presence as less of a mortal threat and more of a foreboding destructive force that lingers over the quiet everyday suburb.  Shedding the skin of what’s commonly known as a psychopathic human being, he becomes a personification of fear, and a fierce incarnation of nature akin to “The wind, sun and the rain,” hence Carpenter’s use of Blue Oyster Cult’s hit single, Don’t Fear the Reaper.

Part of what makes Halloween a prevailing example of a critically acclaimed, landmark movie is Dean Cundey’s ingenious approach as the film’s cinematographer. There’s something to be said about a horror film in which some of its scariest and most tense moments take place in broad daylight. Much like its villain, the crew took an unhurried and methodical approach to the filming style. On the whole, Halloween’s straightforward design blueprint really encompasses my admiration for film in general. The recurring visual motifs, the vibrantly lit, deep-seeded blues that bleed through the nighttime scenes, and the de-saturated October air. Every shot is framed with delicacy and a slow-structured build-up.

On the music front, Carpenter composed the score for the film in fewer than three days. An executive producer from 20th Century Fox initially deemed Halloween “not scary” without its iconic theme. Bringing up feelings of uneasiness and dread, Carpenter’s score is instantly recognizable, even for folks who’ve never seen the film. Alan Howarth, a composer who did renditions of Carpenter’s score in future franchise films, spoke on how it has crept into our culture: “Now when kids go to show what they’ve learned practicing the piano, instead of chopsticks, they’ll play Carpenter’s main theme. It’s reinvented the culture completely.”

Saying I’m enthusiastic about the Halloween franchise would be an understatement. Being a regular poster on Trancas Internationals OHMB (Official Halloween Message Board), I have on multiple occasions met cast members from the films. Back in March, I met Danielle Harris (Halloween 4–5 and Rob Zombie’s reboot series). I also got to meet the hulking madman himself, Tyler Mane, Who played Myers in the 2007 remake and its sequel. Then just recently I got the opportunity to converse with Malcolm McDowell. Most notoriously applauded for his portrayal of “Alex” in Stanley Kubrick’s A Clockwork Orange, he took the role of Loomis in the reboot after Donald Presence’s passing. Seeing that it’s the 35th Anniversary, Compass International and Trances International Pictures are hosting Halloween: 35 Years of Terror in Pasadena, California on November 15th -17th. This convention is specifically geared towards Halloween, rounding up a good deal of the various Halloween franchises’ contributors all under the same roof. It’s an excellent opportunity for fans to meet and greet with cast and crewmembers.

Looking back, I can still recall the exact moment Halloween’s chilling ending took me by surprise. After firing six shots into Michael Myers, knocking off a balcony, Loomis, presuming certain death, peers onto the lawn to see that The Shape is missing! Laurie, sensing his absence, begins to sob uncontrollably. Loomis looks up as if he knew this would happen. Then it ends. We’re given no indication of what happened to The Shape or where he is, only the restless awareness that he’s still lurking elsewhere. In a metaphorical sense, the movie addressed the everlasting imprint of evil. Evil will never die, it’s something that will permeate throughout humanity for forever, and in many cases it’s often triumphant over good.  The fact that The Shape is not on the lawn at the end and Loomis knew this would happen is a testament that he’s more than human. Not a man, but a dark entity and a force. A force that’s only true purpose is to cause devastation and destroy, and he’ll always be out there. That final message epitomizes why Halloween has had such a lasting stamp as one of the most eerily freighting films of all time.

In celebration of its 35th anniversary and the upcoming holiday, just in case you weren’t already planning on it, pick up a copy of Halloween and give it another watch. At the retail price of $19.99 it’s recently been re-released on Blu-ray with an approved transfer from Dean Cundey himself. It’s all the more reason to revisit its immortal stature.

A slightly different version of this article first appeared at the WCU Quad website.