A Look at Julian Assange, Wikileaks, and the Morality of Journalism 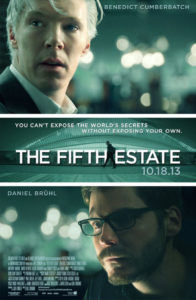 “Man is least himself when he talks in his own person. Give him a mask, and he will tell you the truth.” -Oscar Wilde

Wikileaks serves as a website with the goal of exposing the truth without filter, editing, or bias.  It is called the Fifth Estate as a way of referencing how it is replacing the 4th estate of journalism, which is said to really be the 4th branch of government serving as a check and balance to the executive, legislative, and judicial branches. Julian Assange (Benedict Cumberbatch) is the man behind the website who seeks to expose injustice and create a world where the powerful are exposed when they seek to pick on the weak.  The idea is simple: create enough layers and fake information layered over real data being leaked and you can hide the identity of the informant while allowing the real documents and data to be published for all to see.

Quoting Oscar Wilde, Assange rallies the support of Daniel Berg (Daniel Bruhl), a computer technitian looking to be a part of something life changing.  Daniel is seduced by the ideology Assange is espousing, and quickly joins what he believes is an extensive network of individuals working around the world to gather data, and expose it to the world bringing greater transparency and justice to those who have only known oppression and injustice. This begs the question to whether Julian Assange, and by extension the film itself, is speaking in his own person or with the mask of his persona?

The Fifth Estate is well cast and supurbly acted by both Cumberbatch and Bruhl.  Cumberbatch is effortless in his portrayal of Assange and even creates a strong sympathy towards his character’s lofty ideals despite the screenplay being based on a book written by Daniel Berg, and another book by the U.K. Guardian’s David Leigh and Luke Harding.  Each of these men in real life had very up-close views of Assange, and Berg had intimate knowledge of the inner-workings of Wikileaks itself.  Both books, I imagine, do not paint Assange in the best light and is one of the reasons that the real Julian Assange has blasted the film and Cumberbatch’s decision to be a part of it. Bruhl gives another solid performance that builds upon his strong portrayal of Niki Lauda in Rush.

Despite the fact that the books (that informed the screenplay) paint a more negative view of Assange, the film seeks to seduce you with his brilliance, ego, and genius much like Daniel Berg is shown to have felt, early on in the film, when everything was possible and the notion of changing the world was within reach.  Assange’s genius was to see the potential of mobilizing every citizen into being potential journalistic sources for exposing fraud and corruption and shining the light of truth into every dark corner of the world.  From Kenya, where Assange worked personally to expose the political corruption and death squads taking out political enemies, to Russia, Switzerland, and the United States, Wikileaks would seek the help of anyone willing to bravely take on the powers that be in the name of the greater good. Courage, he said, is contagious.

The dark side of this altruistic pursuit is that information is power, and when you expose those in power, they will strike back.  This exposure of information also makes many people vulnerable and places them in harm’s way when certain secrets are made known.  The most obvious case of this involved the U.S. military documents exposed by Wikileaks, in conjunction with The Guardian, the New York Times, and Der Spiegel, where Assange was accused of having received classified information from Pvt. Bradley Manning (now Chelsea Manning).

While Assange has maintained the importance of releasing this information and has made claims that there is no evidence that anyone exposed by this leak was harmed, this leak of 91,000 documents (as well as many others later) sent the United States, and other governments around the world, reeling.  Laura Linney (Love Actually, The Exorcism of Emily Rose) and Stanley Tucci (The Hunger Games, The Devil Wears Prada) are subtle, yet solid, in their roles as government officals caught up in dealing with the aftermath of the wikileak exposure of so much classified information.  Their part is simply meant to provide us a window in which we are able to see how the U.S. government was affected with the exposure of so much intel. They are also able to interject some needed humor into this story that takes itself very seriously.

Another narrative of the film that is playing out all across the Western world primarily, and that is both a positive and a potential danger, is the eroding sense of privacy we are experiencing with our smart phones and other technology.  On one hand, we are able to capture every moment of our lives and connect with others easier, as well as expose corruption with the raw truth of instant photos, video, and the like.  In essence we have the power to become the citizen journalist Assange seeks.

On the other hand, as we grow more accustomed to documenting everything and living voyeuristic existences, secrecy and privacy fall by the wayside. We think nothing of having our information and lives all over the internet. Many times we are the ones posting it there. Yet danger is always at the door when so much information is available, and this is most true when it comes to the intelligence community, and the many operations governments have going on world-wide where we have revealed our military intelligence assets and exposed them to their enemies.  Many have lost their lives, or had to go into hiding.

It is along these lines that The Fifth Estate begins to expose the fallacy of Assange’s egocentric charisma and ideology, as it relates to his noble pursuits of pure journalism.  Instead, The Fifth Estatebegins to charge him with hypocrisy for seeking to expose everyone else’s secrets despite, ironically, clinging to his own.  It is here that Daniel Berg’s bias against Assange is exposed, from the source material, the most.

Bill Condon (Dreamgirls, Twilight: Breaking Dawn Part 2) mostly delivers a compelling account of the real-life events of Wikileaks, that is greatly aided by the performances of Cumberbatch and Bruhl.  Condon weighs it down too much in the beginning with distracting graphics and quick cuts that are meant to be edgy and modern but actually make these scenes feel more dated than the 2007-2010 time frame that they took place in. When he allows the scene to unfold naturally and simply lets the drama play out, the story is much more compelling.

In the end, The Fifth Estate is compelling and entertaining but will struggle to find a large audience. Being such a current event, those who do see it will most likely bring their own view, of whether Assange is a journalistic hero or whether he has blood on his hands from the exposure of military secrets to the world, into the theater with them.  And while the film portrays itself as the mask by which the truth of these events might be explored faithfully, one gets the feeling that it is simply speaking in its own person, from the viewpoint of the men behind the film’s source material. In doing so, we are left to wonder if Oscar Wilde was correct in asserting that by speaking as its own person, this film is the embodiment of the very thing Wikileaks sought to fight: bias, edited, and filtered facts that bury the real truth.