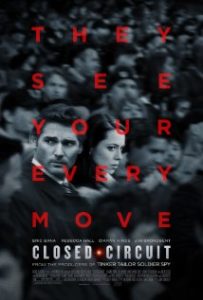 John Crowley directs this courtroom based thriller based on the premise of trying to put a terrorism suspect on trial in London for the bombing of a local marketplace.  Martin Rose (Eric Bana-Star Trek, Munich) is tapped to be the defense attorney after the death of original attorney.  Appointed as special defense council is Claudia Simmons-Howe (Rebecca Hall-Iron Man 3, The Prestige, The Town) who is an ex-lover of Martin’s. Her past indiscretions with Martin is being hidden from the court, which violates the ethical requirements of her appointment. Their affair could also derail their ability to defend the case and puts them in a dangerous position as the facts of the case begin to be unveiled.

The title, Closed Circuit, and even the trailer for the film, indicate a broader view of the politics of surveillance and the complications it creates with our freedom, especially in light of terrorism.  Throughout the course of the movie, however, very little attention or emphasis is actually given to this larger political question, and the camera surveillance shown in the film is simply a plot device in certain scenes that serves to keep the suspense flowing, and nothing more.

Closed Circuit is being touted as being the latest suspense film from the producers of Tinker Tailor Soldier Spy, which starred Gary Oldman, Tom Hardy, and Colin Firth.  While the latter was a slow moving, yet captivating cold war spy film, Closed Circuit is much more open and fluid with its action.  What they share in common, however, is that both are distinctly British.  This film not only takes place in London, but is thoroughly steeped in the British legal system.  American audiences may have trouble understanding some of the nuances of the British system, such as the need for a special defense council that has access to classified information to represent the defendant, that the regular defense attorney is not allowed to see or know about despite having the same job of representing the defendant.  For audiences who can keep up with these differences from our own system, the rest of the film will fall into place.

Eric Bana does an able job playing a defense attorney who finds out that he is in way over his head.  He makes his character sympathetic enough to bring you into the story, but we aren’t provided a whole lot of background on his character other than what is completely necessary to the film, and in large part that is alright. He is able to subtly demonstrate a painful history with Rebecca Hall’s character that indicates a deep affection for her that is also complicated by the fact that their relationship may have cost him his marriage and and compromised the way his son views him.

While this type of complication might seem cliche if their relationship were the focus of the film, Closed Circuit plays it effectively against the backdrop of political cover-up, and personal danger brought to bear upon both of them by the very legal system they seek to serve.  Julia Stiles (Bourne Trilogy, 10 Things I Hate About You) makes a small, but welcome appearance as Joanna Reece, a New York Times reporter who is close to exposing a larger cover up swirling around the case both Martin and Claudia are involved in. Effective supporting cast includes Jim Broadbent (Cloud Atlas, Harry Potter Series), and Ciaran Hinds (Munich, There Will Be Blood, Road to Perdition).

More than looking at surveillance, Closed Circuit asks a deeper question of “who can you really trust?” and then begins a slow build-up of exposing the very structures of society we are taught to believe in and turning us towards the dark side of these institutions.  No character escapes this film without being a little tainted in the process, and likewise, you will leave the theater asking your own questions about government, security, and the choices we all make.  Any violence in the film is carried out methodically without succumbing to the need to be filled with over-the-top gestures, and as a result keeps the film grounded to lend tension to the legal, personal, and political turmoil being created through these series of events.

Closed Circuit is a really good, but not great, film.  You will be entertained but you won’t be blown away by it either. It is fortunate that it is being released at a perfect time, as there are currently no real mystery/thriller films on the market.  Being sandwiched between a summer of blockbuster letdowns and throwaway action films that are being released just before the onslaught of potential Oscar winning films head our way this fall, Closed Circuit should be able to find for itself a decent adult market.  So for those seeking to avoid this weekend’s competition of The Getaway and the boy-band infested documentary that is One Direction: This is Us, Closed Circuit just might hit the spot.