Sorry, But We’ve Been Introduced Before. 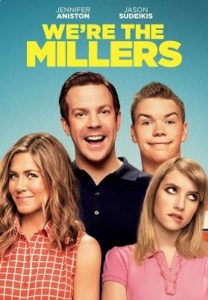 Just to get you caught up, Jason Sudeikis (SNL, Horrible Bosses) plays a low level drug pusher who is fine with his easy, family-free life.  When he attempts to help a homeless teen girl named Casey (Emma Roberts-Nancy Drew), at the behest of his teenage neighbor Kenny (Will Poulter-Son of Rambow, Chronicles of Narnia: The Voyage of the Dawn Treader), his money and drug stash is taken.

Needing cash, his old friend/enemy Brad (Ed Helms-The Office, The Hangover) offers him a job as a drug mule.  All he needs to do is go to Mexico and pick up some marijuana from a local drug lord and carry it back across the border to Denver in an RV that Brad will have ready for him when he arrives in Mexico.  To make it plausible, he’ll need to pose as a family on vacation.  He recruits Kenny and Casey to pose as his kids.  His stripper neighbor, Rose (Jennifer Aniston-Friends, Horrible Bosses, Office Space) whom he likes, but always fights with, happens to be in need of cash and reluctantly joins his crew posing as his wife.

The rest of the film is a tale of their crazy antics of trying to pick up the drugs and get back to town.  The problem is that their antics are all rehashed jokes and situations that you can find in any other raunchy/drug-based comedy.  Ed Helms’ Brad is a meaner version of Andy from The Office with some of the personality of Stu, from The Hangover.  Only to set him apart, he is an eccentric business man with a giant orca swimming behind his desk.  Vector, Gru’s nemisis in Despicable Me had a shark, and Dr. Evil had sharks.  I guess a whale is unique then?  Most of Ed Helm’s lines that are meant to get a laugh are some variation of “That was kind of a dick move, huh?”.  Laughing? Neither was the audience.

Jennifer Aniston is still trying to dirty up her Friends  “girl next door” image (as she attempted to do in Horrible Bosses) by playing a stripper in We’re the Millers.  No matter what role you put her in, she still is the girl next door.  As you get her character’s backstory, in We’re the Millers, you’ll forget her day job.  That being said, she does have some moments of playing in the dirt with the rest of the cast, but nothing that will stain her established image.

Will Poulter, Kathryn Hahn (Anchorman, Step Brothers) and Nick Offerman (Parks and Recreation, The Men Who Stare at Goats) have the most to offer here, but even they can’t elevate a boring script that screams of redundancy.  You may even have to stop to see if this is a Farrelly Brothers picture based on the typical banter and humor.

So how have you seen this film before?  Let me count the ways:

Like I mentioned at the beginning, just by seeing the trailer for We’re the Millers, you have seen the entire movie.  If this film bombs, then all of the actors involved will still have long and satisfying careers in other projects that will surely be more funny and more original than this project is.  But if you are looking for laughs and originality, then you might want to go introduce yourself to something else, because We’re the Millers have been introduced to us before.