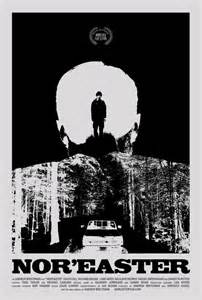 An angstrom is a unit of length, infinitesimally small; one hundred millionth of a centimeter. We measure light waves in angstroms. Visible light ranges between 4000 and 7000 angstroms. How bright, significant, effective, or ineffective is just one angstrom? Writer/Director Andrew Brotzman’s feature debut Nor’easter muses on man’s need for certainty and significance in a seemingly indifferent world and the deleterious consequences that result from his strivings to fulfill that need.

Erik Angstrom (David Call) is a young priest newly arrived at his first charge, the island of North Haven, Maine. He leads a mostly empty chapel in a lonely mass with all the tentative gravity he can muster. Erik attempts to befriend the Greens, an influential, wealthy family absent from mass since the disappearance of their eleven-year-old son five years prior. The patriarch of the family, Richard (Richard Bekins), gives Erik a tour of the house, asking if it’s odd that they keep their son’s room untouched, as if he’ll return one day. Erik anxiously offers vague advice, preferring to remain a safe observer. Richard, having no faith in his new, diffident Father, dismisses him as a boy.

The loneliness of the priesthood consumes Erik. Vacillating between belief and unbelief, tossed about like a wave, he whimpers a prayer to God, “Were you ever there, I know you were. Were you?” Unwilling to remain an outcast from his own parish, he becomes more forceful in his response to the Green’s fruitless hopes and implores them to accept Josh’s death. Maybe in doing so, they can regain their faith and come back into the fold. An intimate, symbolic funeral service is held in the snow. And that night Josh, now 16, inexplicably reappears.

The plot exploring the details Josh’s absence ends up creating a competing protagonist and introduces themes that can’t be developed fully in the scant 82-minute runtime.

Where has he been? Why come back now? Will he stay? Josh is reticent, but his parents do not prod him, content enough in the silent return of their son. Erik, now confident that God is alive and watching after all, decides to delve deeper into the mystery. What he discovers will test his sense of responsibility and significance, and stoke the embers of his doubt.

Much of Nor’easter takes place in the gloom of a brooding Maine winter. The meditative gaze of Ian Bloom’s cinematography perfectly frames the snow-laden landscapes. The film opens by contemplating a few of Caravaggio’s better-known works. His famous play with shadow and light becomes the theme for the look and feel of Nor’easter. Where there is bright light, it is almost always diffused through stained glass or dull plastic. Likewise, the string-based score dwells in dissonance and droning that creates an ominous tension shrouding each scene in dread. While presented as a psychological thriller, the film’s mood more closely resembles that of a satisfying slow-burn horror. No one element of the film is especially intrusive; rather, Nor’easter relies on an elevated sense of muteness to make its impressions felt.

David Call turns in a fine performance as the ambivalent Father Angstrom, a role that calls for a tricky mix of subtlety and stubbornness. He convincingly portrays a reluctant leader who is equal parts hesitant and impulsive, consciously caring yet unwittingly selfish. Liam Aiken has a tough assignment as the prodigal son Josh. The character’s motives are draped in ambiguity, which leaves Aiken with a lot of screen time just looking disaffected and bored. The cast is proficient for the most part with Danny Burstein deserving special recognition for his superb performance in the third act.

Erik Angstrom is a conflicted man.

Erik Angstrom’s struggle with faith and significance seems to be the central theme of Nor’easter and that’s where the movie’s strength lies. There are questions on the nature of faith—why does God seem more real in times of blessing? Is the ministry a safe place to explore doubt and faith? The role of the clergy in times of suffering—how much peace can a minister bring to a grieving family? How responsible is he for their lack of belief? Even the ethical implications of Roman Catholic confession are considered—does religious conviction supersede man-made laws? Is the “Seal of the Confessional” wisdom or foolishness?

The plot exploring the details Josh’s absence ends up creating a competing protagonist and introduces themes that can’t be developed fully in the scant 82-minute runtime. Nor’easter ends where it has to, but it is still a surprisingly abrupt finale to a film that was patient in arriving there. The final resolution is fitting if a little predictable.

Nor’easter is currently making the festival rounds and will hopefully garner praise for its austere beauty and understated approach to mystery. Andrew Brotzman shows promise to become a storyteller who can spin a taut thriller as well as reflect honestly on the sundry ambiguities of faith, grief and significance.