A Thousand Acres Doesn’t Have a Story That’s Worthy of Its Lead Performances. 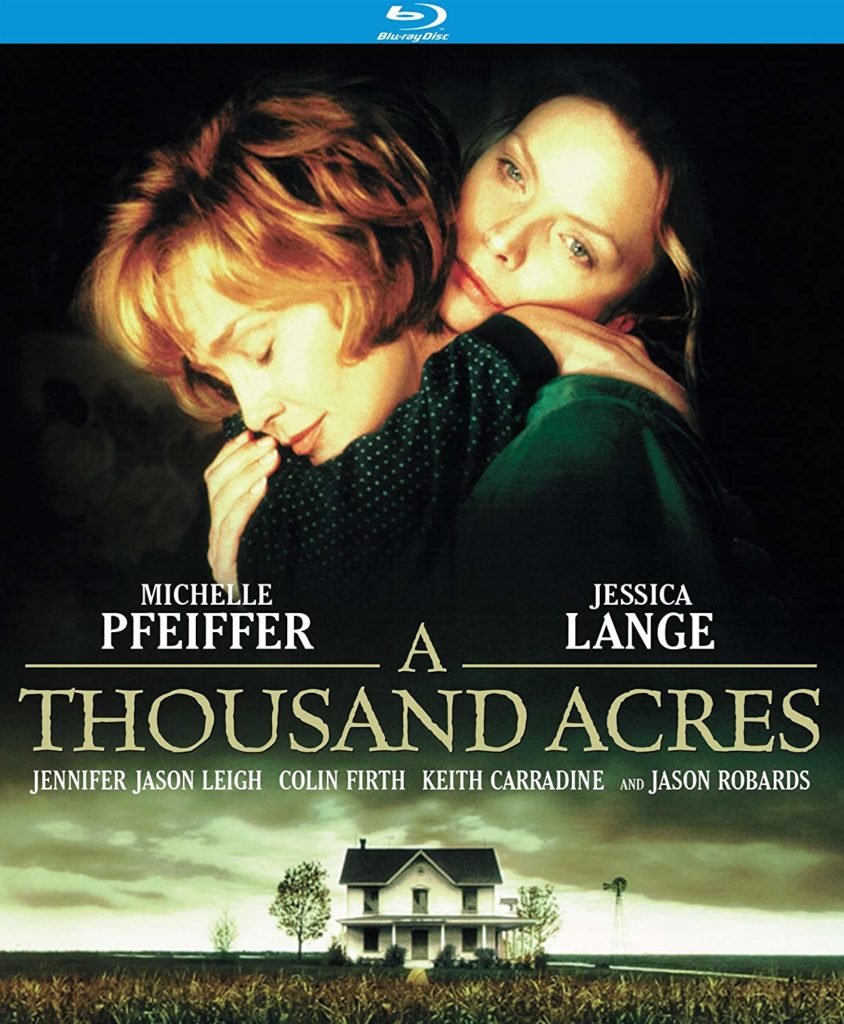 As an adaptation of an adaptation of King Lear, A Thousand Acres fails to be elevated by its source material, but it shines as a showcase for its two leading actors. The movie lurches ungainly from one scene to the next, and characters suddenly switch motivations and loyalties fast enough to cause whiplash, but the film is anchored by great performances from Jessica Lange (Blue Sky, Francis) and Michelle Pfeiffer (mother!, The Age of Innocence).

The movie is based on the novel by Jane Smiley, which itself was a loose retelling of King Lear set on a farm in the American midwest. A Thousand Acres goes farther, however, than just changing the setting of the play- it reframes Shakespeare’s story to place the central focus on the two elder daughters. Ginny (Lange), and Rose (Pfeiffer) aren’t the conniving villains their analogues in Lear are. Rather they are two sisters who had to rely on each other to get through a motherless childhood with an angry, abusive father who drank too much and cared too little.

The movie lurches ungainly from one scene to the next.

To the world at large, Larry Cook (Jason Robards, Magnolia, Julia) is the most important, respected and prosperous farmer in the county. He decides, in order to get around inheritance taxes, to incorporate his farm and name his three daughters as the primary shareholders. Ginny and Rose immediately agree to the idea, but the youngest daughter, Caroline (Jennifer Jason Leigh) expresses her doubts. As a result of her reluctance, she’s cut out and the farm is split equally between the two older daughters. This will no doubt end well for everybody.

Lange and Pfeiffer are called upon to do all the dramatic heavy lifting in the movie. Robards, as Larry, has two modes: stony-faced scorn, and lunatic raging, Jennifer Jason Leigh is barely in the movie, and the husbands (played by Keith Carradine and Kevin Anderson) are non-entities. It’s totally Lange and Pfeiffer’s show, and the two actors are more than capable of handling it. Lange’s Ginny is motherly and caring, and wants to assume the best about people even when it’s not warranted. Pfeiffer’s Rose, on the other hand, is filled with anger- anger at her father for his many terrible past sins, anger at Ginny for not being able to acknowledge them, anger at herself for getting pregnant too early, and being stuck on the farm with Larry. Pfeiffer can hit just the right notes for Rose’s fierce cynicism, it never tips over into a one-note shrillness. 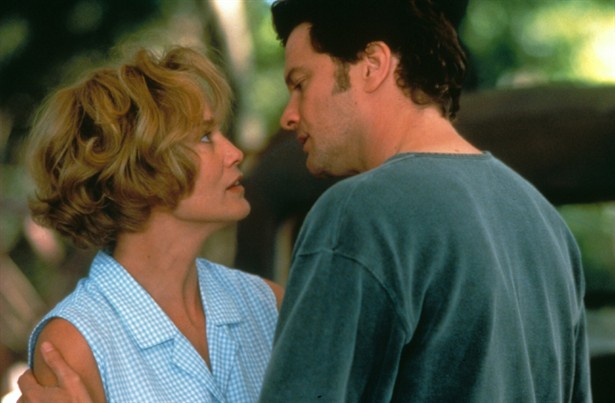 As the youngest daughter, Jennifer Jason Leigh has comparatively little to do. Ginny gets furious at her father for forgetting Carolyn even exists, yet the movie commits the same sin. After Larry cuts her out of the corporation in the beginning, Carolyn pretty much just drops out of the film until a dramatic reveal that she’s helping Larry sue Ginny and Rose in a bid to get back the farm, and after that plot is resolved, she goes away again, this time for good. While not every family dispute resolves neatly in real life, if ever at all, in a movie that sort of thing can lead to a messy dangling thread.

Overall, the film feels like it’s been cut down to the bone- it has a runtime of just over 100 minutes, which is pretty short for a story of this scope. Smiley’s novel ran 367 pages, and I’ve never read it, but I’d imagine great chunks of its story were left out of the movie- the film was apparently heavily reworked in the editing phase. I wonder if there shouldn’t be a superior two-and-a-half to three hour cut out there.

Lear is a famously meaty part for an aging actor, but Robards isn’t given a lot of screen time. This is, of course, partly a result of the story’s new focus- Larry is the villain, not the daughters- but it makes some of his mood swings feel much more capricious in this more naturalistic take. Even King Lear gave Cordelia multiple chances to get on board with her father’s plan before Lear threw her out. Here, Caroline hesitates just a bit, and Larry locks her out of the house. Much of Larry’s current mental state can be chalked up to the onset of dementia, but it remains unremarked upon by the characters in the film. 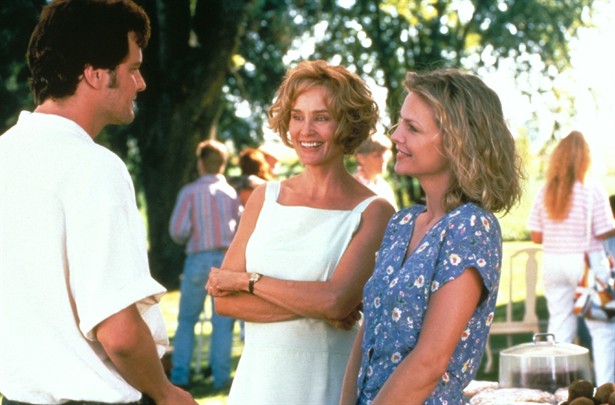 If any one actor is seriously miscast here, it’s Colin Firth (The King’s Speech). His character, Jess, is the prodigal son of a neighboring farm, returned home after running away thirteen years prior. Jess was one of those free-thinkers back in the day, and he has come back with all sorts of crazy ideas about organic farming. Firth just doesn’t sell the part. He’s always been best as the ‘nice guy’ that almost gets overlooked until the happy ending. Firth’s a little too stiff for the one-time rebel ‘bad boy.’

A Thousand Acres works best as a vehicle for Jessica Lange and Michelle Pfeiffer to showcase their dramatic skills (not that either had anything to prove, as both had been nominated for several Academy Awards by this time, and Lange had even won twice). The movie doesn’t quite satisfy otherwise, it’s too choppy and the story doesn’t flow smoothly from one moment to the next. If it was studio interference, it shows and it’s to the film’s overall detriment.

The Blu-Ray released by Kino Lorber Studio Classics comes packaged with a feature-length audio commentary by director Moorhouse. There are also the usual collection of trailers for related Kino Lorber discs.