A Desert Noir Well Worth Getting Caught up in 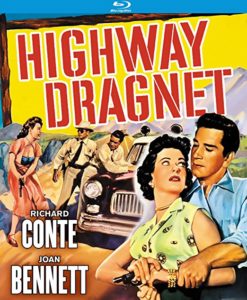 A forgotten man, in military uniform, no less, finds himself alone with a seductive bar girl in Vegas.  He’s a well decorated veteran of whichever war, presumably Korea, though following form with so many returned WWII servicemen Film Noir protagonists a decade prior.  The entirety of the rest of 1954’s Highway Dragnet hinges on the question of who murdered her during the fade to black, in between their very public smoochy embrace in the bar and the next morning as he’s dropped off seven miles outside of town.  The cops, led by the valiant Detective Lieutenant Joe White Eagle (Reed Hadley – I Shot Jesse James) arrest him, being the only suspect.  Afraid and not having it, he escapes, into the desert.  Can he survive?  Did he really do it?  Is he guilty?  Does his service to his country mean nothing??

Paul Hibbard, in a contribution to ZekeFilm’s recent feature, “Film Admissions: Fritz Lang” encapsulated classic Film Noir thusly:  “The whole genre is an extension of the feelings men had, returning from the war in the 40’s to a society that doesn’t appreciate them.”  With the exception of branding Film Noir as a genre (a common misconception), Paul, with that statement, hits the Noir nail on the head.  Male loneliness and displacement weren’t exclusive to the postwar era of course, but the sheer volume of men returning to an undeniably altered world was unprecedented.  Whether the “alterations” in question (newly empowered women, joblessness, “combat stress”, xenophobia, et cetra) are valid points of alienation is a different discussion.  This piece, like the film it’s reviewing, has to be of a far narrower focus.

Highway Dragnet serves up delicious variations on the familiar notions of the femme fatale, the persecuted veteran, the girl in peril, the desert, and even Native American relations.

Highway Dragnet, helmed by prolific Art Director (an Oscar winner for John Ford’s How Green was my Valley) turned Director Nathan Juran, is nothing short of an unsung Film Noir masterpiece.  Made with obvious economy and a taut focus by Allied Artists Pictures, it teeters ever-tantalizingly between its newly self-proclaimed elevated stature and its then-recently defunct Monogram Pictures B-movie identity.  Highway Dragnet, with its car chases and convincing visual reality, isn’t and altogether cheapie, even as it exhibits a resourceful Joseph H. Lewis sensibility. 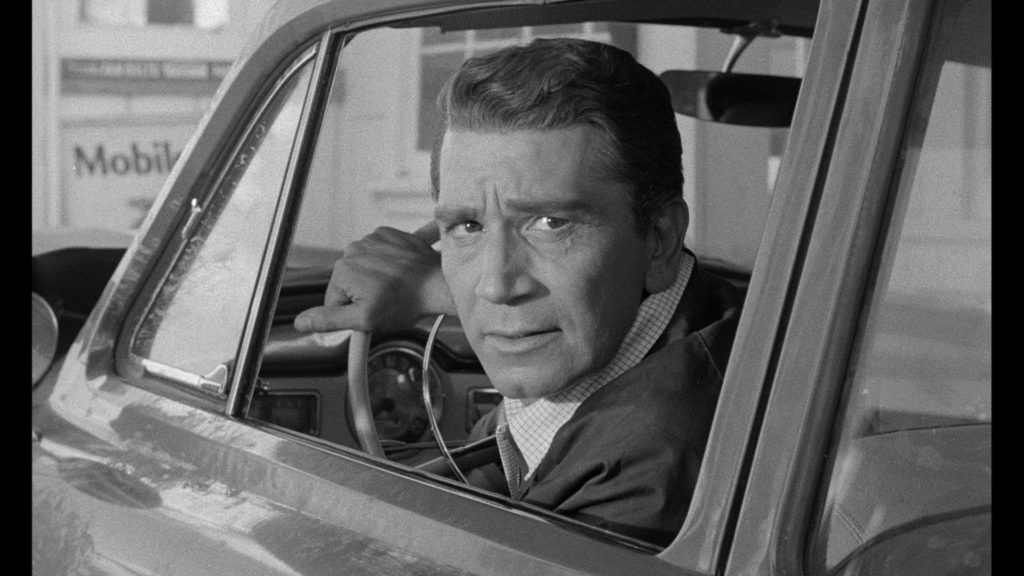 While most attempts to tidily define Film Noir have been lacking to futile, Highway Dragnet, it must be said, ticks the boxes of the form quite well.  The sun-fried Vegas Desert setting, with its two-lane roads to nowhere, desolate diners where the waitress literally throws menus onto the table, and gas stations where the attendant moves in slow motion when time is most of the essence may not be the urban jungle that term “Film Noir” evokes, but it’s every bit the precursor to Orson Welles A Touch of Evil in terms of protagonists caught in a no-man’s-hellscape.

Yet, Juran claims to have had no ambition nor intention of his films living on.  Looking back on his career, he’s quoted at IMDb: “I always felt that my movies were temporary. They were just pieces of celluloid. You couldn’t eat them. You couldn’t sleep in them. You couldn’t use them in any practical way. So, I never really took the picture business too seriously. But now, it’s nice to think that I burned on the bright side, even if it was only briefly.”  Juran, in this sense, was in good company, what with the male tendency of the era to sidestep talk of artistry or any importance of the movies themselves.  Still, he cooked up a bright spot in a dark cinema. 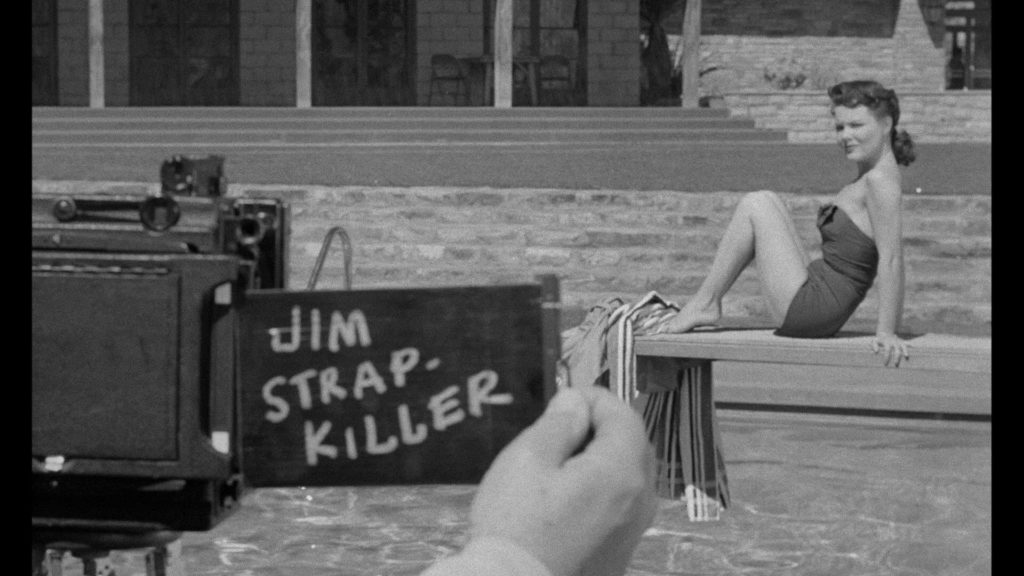 Once our “hero”, played to a near-perfection of sad sack masculinity by Richard Conte (Thieves Highway), is picked up by two attractive ladies also leaving Vegas in a ‘53 Dodge Coronet Sierra convertible, things get all the dicier, all the more provocative.  All the more deadly…?  Noir favorite Joan Bennett (Scarlet Street, Woman in the Window) is a terse photographer in a white dress; Wanda Hendrix (Ride the Pink Horse) is her soft-hearted model.  This being 1954, they happily turn over their car keys to this man they just met, enabling him to floor it away from trouble.  The titular highway dragnet isn’t a particularly prominent part of the story, but it does present one of many obstacles.

Highway Dragnet, besides being one of the great unsung Film Noir classics, is also noteworthy for being the first produced screenplay of Roger Corman.  Originally titled The House in the Sea, word is that young Corman was appalled at how little the finished film resembled his vision, leading to swear off relinquishing control over his work from then on.  Whether or not we have Juran to thank/blame for the subsequent rise of Roger Corman, it should be agreed (by everyone but him) that Highway Dragnet nonetheless stands as one of the best films to bear the now-legendary producer’s name. 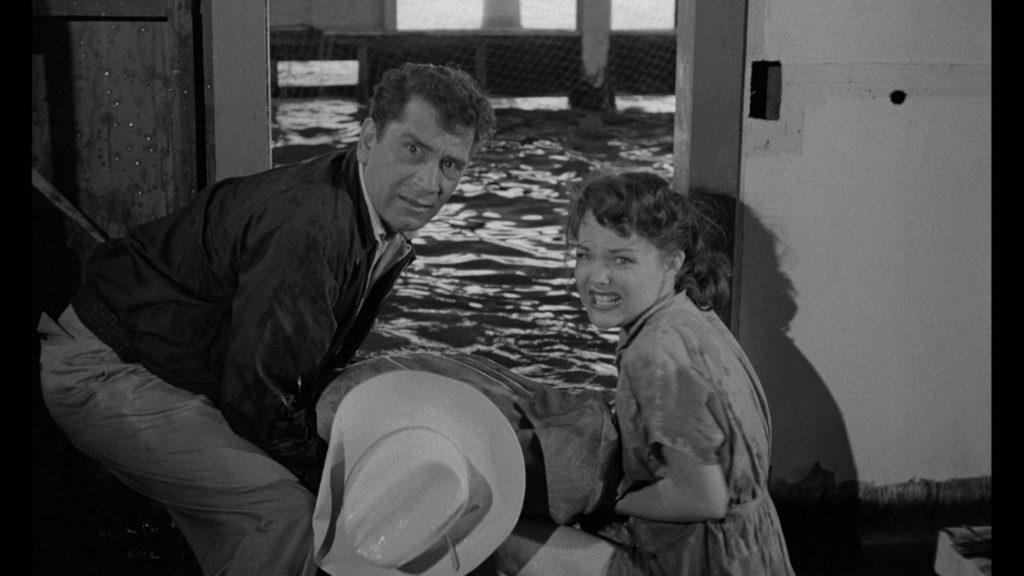 More in league with what Corman would come to be known for is the occasional amusingly noticeable gaff or workaround.  Sure, Hendrix’s dress seems to change color from shot to shot in the final moments of the film.  And sure, for whatever reason, that’s obviously not Reed Hadley as White Eagle in watery showdown; the stand-in deliberately obscured under the character’s five gallon hat.  But these citations somehow only add to the charm and legitimacy of the whole experience.  In, around, and leading up to them, Highway Dragnet serves up delicious variations on the familiar notions of the femme fatale, the persecuted veteran, the girl in peril, the desert, and even Native American relations.  The mystery simply works, even as the suspect pool is pantingly shallow.

Unfortunately, this new Blu-Ray edition from Kino Lorber Studio Classics has no bonus features (aside from a few trailers for other KL Noir titles), though the new 4K restored transfer is far and away the best representation of Highway Dragnet.  All the more reason why this particular Dragnet is well worth getting caught up in.