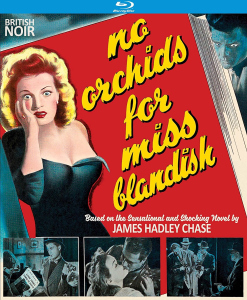 There’s nothing bland about the 1948 “British Noir” film No Orchids for Miss Blandish.  In fact, the only thing even blandish about it is the central character’s last name.  Indeed, the film is many things, a wild, internal channel-changer in terms of tone, era sensibilities, and even film genres.  Two things that it isn’t quite so obvious about being are, oddly enough, “British” and “Noir”.

Ostensibly a torrid kidnapping caper, No Orchids for Miss Blandish starts out as a staid, classy chamber drama, hanging on a single tracking shot close-up of a small orchid package as it makes its way to the title character.  And already, we have a glaring contradiction with what little we know about this movie thus far.  Here are a few other facts thus far: Despite the clunky title, this is a sleekly realized production with elegant black and white photography.  Also, despite word of it being a scandalous and repressed picture, it carries the earned approval of the British Board of Film Certification (BBFC).

Quickly it gives way to Douglas Sirk-ian melodrama, a good several years before that would gel as a cinematic thing.  Exposition and newspaper headlines inform us that Miss Blandish (Linden Travers of The Lady Vanishes), the still-youthful heiress of a large fortune, is to be married while sporting one million dollars worth of the family’s rare diamonds. 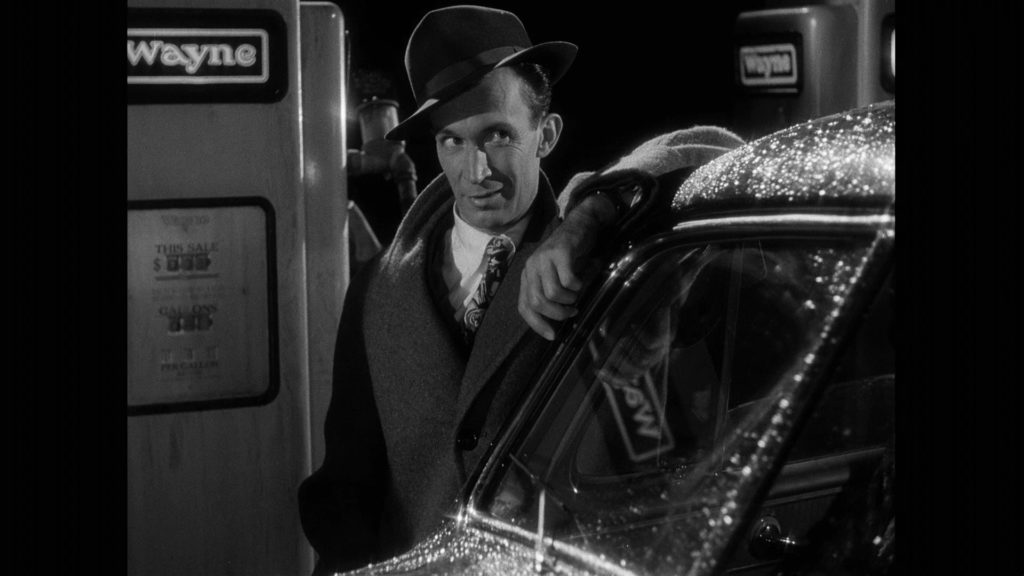 Which is where the film abruptly turns a corner, going back a few decades and becoming a Cagney-style early 1930’s gangster picture.  The gangsters decide it would be a good idea to steal those diamonds, you see.  For this stretch, Miss Blandish has got it all:  Shocking Pulp violence, fedoras, quality menswear, and one buzzy-talking thug after another.  There are, it seems, too many gangsters to go around, as they’re having themselves a gang war.  And, both sides want the diamonds.

But first, stop the plot for one of those fancy flirtatious Copacabana nightclub numbers!  The song is kind of dumb, and the girl can’t really sing, but at least she’s got a nice dress and knows how to wear it.  If one entire song isn’t enough, don’t worry, there will be more.  The nightclub is a major location for the criminal goings-on, the story spending just as much time with backroom dealings as it does with the various floor shows. 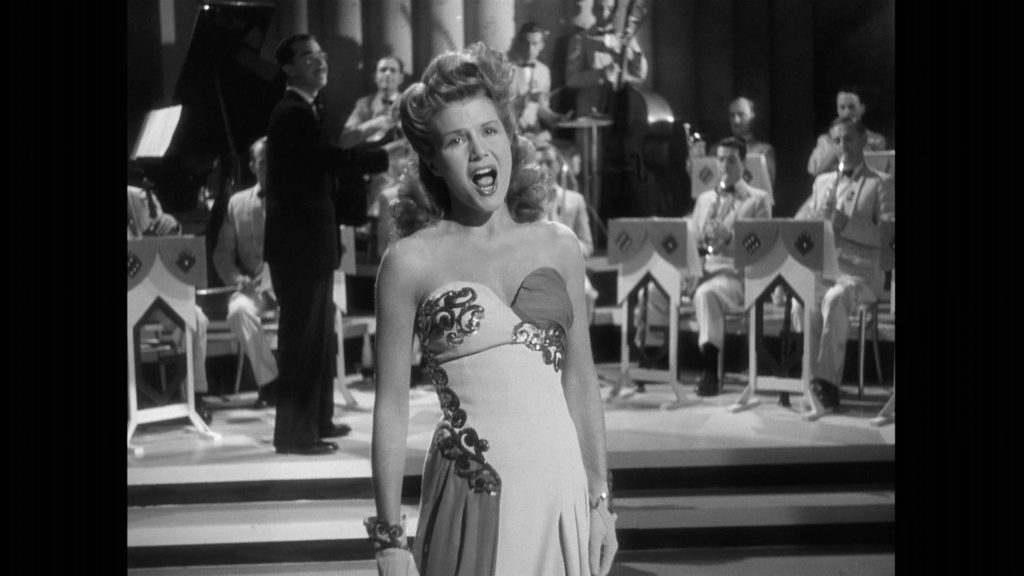 Then, things take a crazy turn when Miss Blandish is kidnapped, with the main accomplice (Jack La Rue) having fallen in love with her.  Then, she with him.  Welcome to Stockholm Syndrome: The Movie.  Thus begins the weird “Romeo & Juliet” phase of No Orchids.  Amid that, Blandish herself nonetheless takes a backseat to the dastardly deeds of the numerous other characters, several of whom honestly blend together.  So many white toughs in suits…  The raciness  quotient is considerably by 1948 film standards, though apparently not at all indicative of what author James Hadley Chase (The Night of the Generals) served up in his scandalous source novel.  And just when the quicksand of brutality, double-dealings and lascivious sexuality seems inescapable, everything stops for a nightclub stand-up comedy act.  The routine runs several minutes, just long enough to forget that we’re watching a movie.

Evoking an almost arbitrary hodgepodge of American film genre tropes and stylings, the name of the film’s director. St. John Legh Clowes, might be the most British thing about the entire affair.  But considering that Mr. Legh Clowes’ directorial filmography is only as long as his name (four films), it’s extra special that the proto-mashup that is Miss Blandish comes off as well as it does.  Pre-Tarantino, pre-De Palma, pre-Leone, it seems to revel in its unconventional unpredictability.  It’s a jarring and undeniably interesting piece of work, but coldly aloof, as well.  Yet, in its own jaw-dropping ways, informs of both the human experience and the human mind.  No one, after all, can be contained nor summarized by an algorithm or personality test. 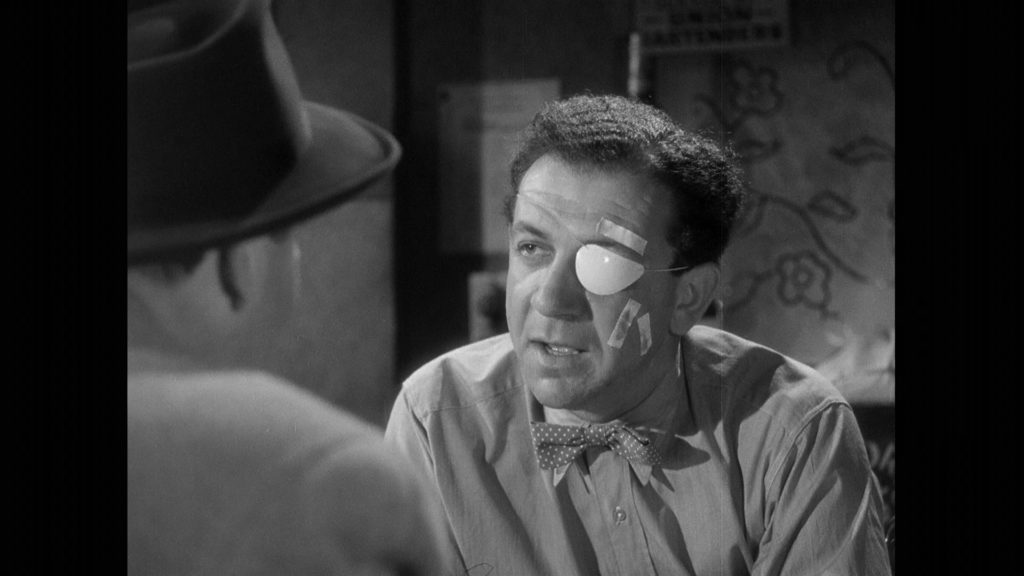 In a real life twist, after the film was condemned by the public, following its release in its native Great Britain, the head of the BBFC was forced to apologize to the populace for passing the film in its uncut state, and “failing to protect the public”.  Today, Kino Lorber Studio Classics need issue no such retraction.  In fact, it’s likely the label would’ve caught more shade from audiences had its new 70th Anniversary Blu-Ray edition not contained the uncut version of this cinematic curiosity.  Aside from a few trailers, there are no extras on the disc.  The transfer, however, looks lush, detailed, and even luminous at times.

It might not be what we associate with the words “British Noir”, but Miss Blandish is technically British, and sure, maybe there’s a Noir streak to it after all.  It’s also a pretty good gangster film, a bona-fide doomed romance, a chamber piece, an okay musical, a sexy potboiler, with a not uninteresting stand-up comedy routine.  Throw roses or throw tomatoes, just don’t send any orchids; things will not end well.

The images used in this review are credited to DVDBeaver and are taken directly from Kino Lorber’s March 2018 Blu-ray release of 1948’s No Orchids for Miss Blandish.