Once Upon a Time, There was a Country… 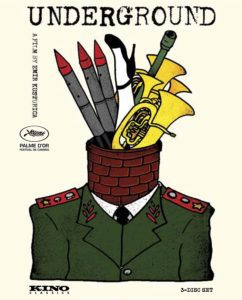 Maniacal and brazenly charged by its own incendiaries, Emir Kusturica’s massively ambitious 170 minute Underground is an unabashed display of social and political madness, the likes of which were not to be seen again until the 2016 U.S. election.  In Underground  though, the bombs, philandering crackpots and loose zoo animals are literal.  (Okay, yes, the 2016 election had at least one of those actual things).

Anyhow, all of that is merely the extended opening of this madcap historical fiction: The 1941 Nazi bombing and subsequent occupation of Belgrade, Yugoslavia.  Random explosions destroy buildings, free the animals of the local zoo, interrupt prostitution, disengage heavy light fixtures, and generally thrust everything from panic to perturbment onto the populace, all while an ever-present brass band runs along, farting out the film’s high energy de facto theme on their trumpets and tubas.

Random explosions destroy buildings, free the animals of the local zoo, interrupt prostitution, disengage heavy light fixtures, and generally thrust everything from panic to perturbment onto the populace.

In this most impressive burst of controlled chaos, Kusturica introduces his two main characters whom we’ll spend the next several hours/five decades with.  Pals, comrades, soulmates, whatever have you, Marko (Predrag ‘Miki’ Manojlovic) and Blacky (Lazar Ristovski) may be fun to spend time with, but one dares not get too close, as their propensity for backstabbing, drunkenness and whoring freely extend well beyond their own friendship.  As they both fall for the same woman, an attractive actress named Natalija (Mirjana Jokovic), their jerky competition ramps up several notches until finally, one comes up with a way to “bury” the other for years. 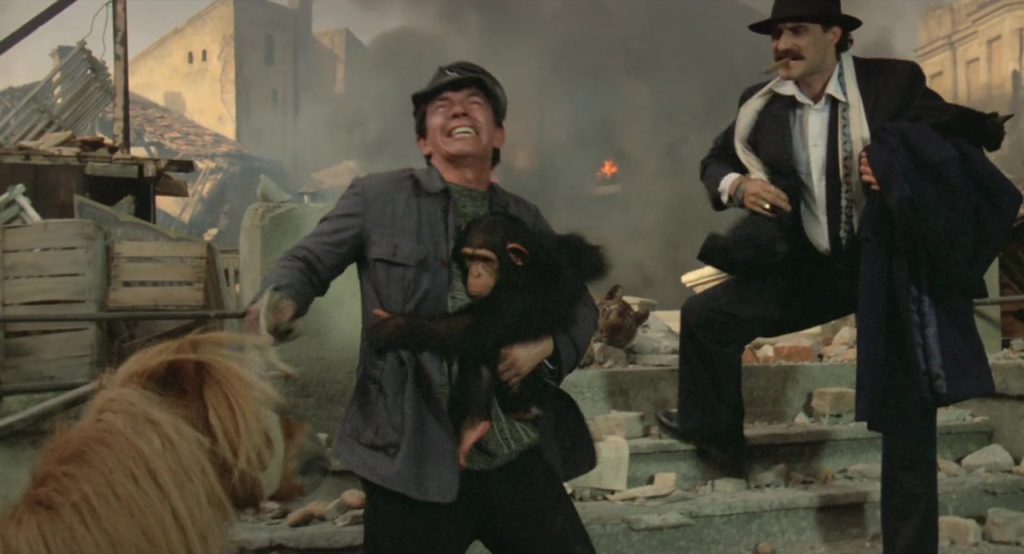 The film earns its title and then some as Marko dupes Blacky and an oblivious cadre of desperate refugees into thinking that World War II never ended, prolonging their stay in a massive subterranean hideout unnecessarily by several decades.  Blacky and company spend their days manufacturing weapons, which Marko is making a fortune selling.  It’s all so crazy and tragic and preposterous and faux-patriotic and selfish, but one has to admit, after a few decades, Blacky’s running a pretty impressively efficient assembly line…  A son is born and grows up in these catacombs.  A monkey, the last refugee of the bombed out zoo, is accepted as part of the makeshift family.  Somehow, after a while, there’s a tank down there.  By the time it occurs to them to get out, there’s another, entirely different war raging.

Now, imagine you were to find yourself serving on the jury of the 1995 Cannes Film Festival.  How could you not grant this movie the Palme D’or?  That’s exactly the question arrived upon by that real jury, led by the late great Jeanne Moreau.  It’s hard to imagine a more gangbusters film taking the top prize than Pulp Fiction, which won the year before.  Yet Kusturica gives Tarantino a run for his considerable money, which would come in spades for him, having been essentially launched by that win. 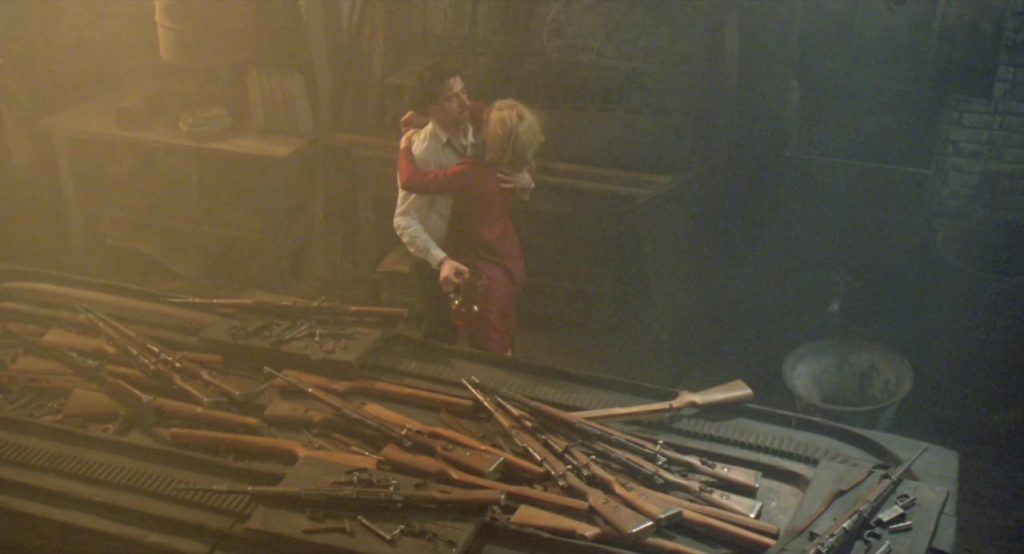 But no such Tarantino career boost awaited Kusturica on the other side of his, his second Golden Palm.  Underground was immediately met with a tidal wave of protest, anger and dismissal, all a result of the film’s apparent politics.  From an American perspective a nearly quarter century removed, it’s admittedly difficult to grasp the nature of this outrage.  Something about how Kusturica chose to present his leads, the Serbian Marko and the Montenegrin Blacky, as uneasy brothers in arms, whereas in reality, the strife between peoples persisted well into the year and a half in which Underground was filmed.  Of course, there was also the disquieting scuttlebutt that the epic film’s production was financed, at least in part, by the regime of war criminal Slobodan Milosevic.  So….

Between the wild kinetic, comedic energy, the crazed filter of recent history, and the unhinged large scale production value and warped sensibility echoing the likes of Terry Gilliam, Underground simply needs to be experienced.   By the end, the sardonic chaos and generational tragedy of it all amounts to a temporal fragility of lives, unfamiliar and familiar alike, and even nations, capable of being sniffed out without a moment’s notice.  Machine gun fire, arbitrary explosions and shouty accusations fly about freely amid yet another chaotic rubble town.  It comes to a head at a large outdoor crucifix, Christ having been rattled lose and dangling upside down by his feet.  It’s a vivid symbol of the desecration and atrocity that humankind insists on perpetuating. 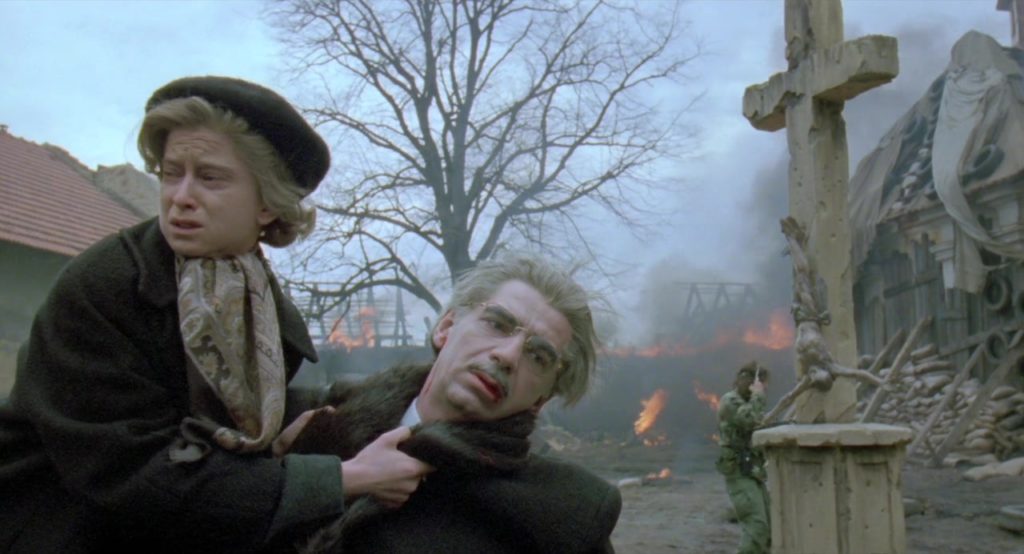 But that’s not all.  Underground delivers an unforgettable epilogue that is anything but title-accurate.  It’s another impressive bit of special effects acumen that puts the whole plight of the characters, the former Yugoslavia, and the running brass band out to sea, together, and forever.  There’s no other ending like this one in all of movies.

Film buffs will not regret adding this excellent three disc set to their home libraries.  Besides the theatrical 170 minute version of the film, presented on Blu-Ray, Kino Classics also provides the considerably decompressed six-part, 327 minute version created for television.  This miniseries, alternately titled Once Upon a Time, There was a Country, is also presented in the 16×9 aspect ratio , is housed across two DVDs.  Additionally, there is also the 76 minute documentary Shooting Days, which tracks the making of and fallout from Underground.  Interviews, an essay booklet, and brief behind the scenes footage is also included.  Finally, the brilliant original cover art by Adam Maida is to be commended, as it’s a spot-on graphic representation of the film proper.

As frustratingly loopy and divisive as the post-Brexit/Trump world can be, Underground is an epic, entirely watchable reminder that things can always be worst, and can always be crazier.  That this message stems from a 1995 Yugoslavian film when there was no more Yugoslavia is all the more absurd.  Kusturica eventually landed on his feet, so hopefully we will, too.  In the meantime, going Underground is always an option. 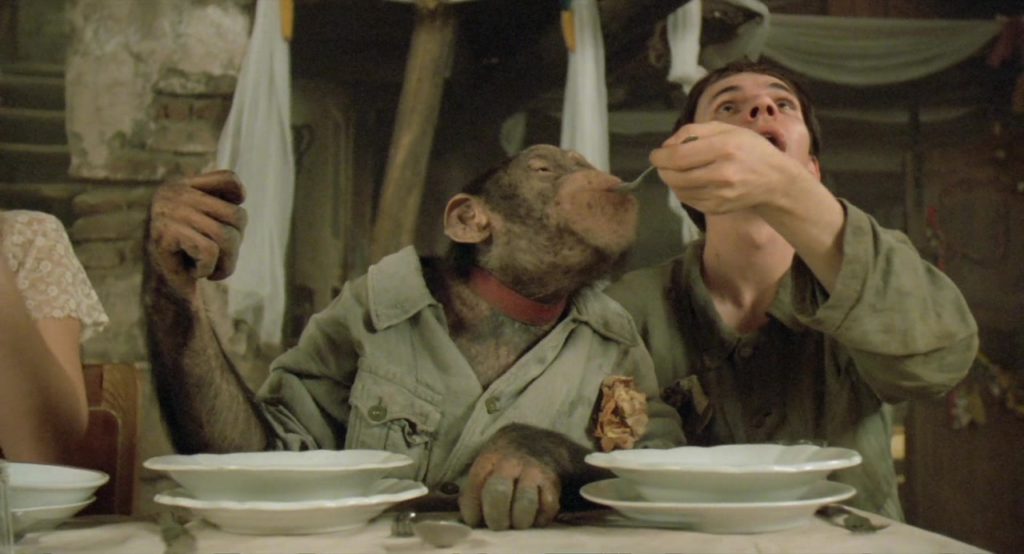