Sometimes, They Say, A Door Is Just A Door… 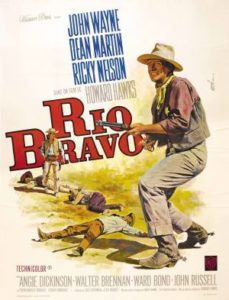 A movie about doors. Yes. I said doors. You walk through them every day. Why shouldn’t a movie character? They have to go from one room to another on occasion, or from outside to in, just like you. Here’s a movie that starts with a shot of a man walking through a door, and it never lets up. I’ve never seen so many matched-action edits from this side of a wall to that side. I’m here in the dusty street outside the sheriff’s office, a character turns a knob, boom, now I’m inside, watching him walk into the room. Sometimes there’s a variation on the door theme. Sometimes it’s a man striding into a saloon. That’s not exactly a door. More like swinging slats. But it’s wood on hinges, so it counts. Or a couple times, it’s the character walking into the back-room jail cell through a barred… door.

What I’m saying is, we walk through a lot of doors in this movie. But why? In the century-long history of cinema, if more than ten percent of all the doors ever walked through by characters is represented in one single movie, it must mean something, right? Wrong. It doesn’t mean a thing. Director Howard Hawks was honest on the subject of his late career deification on behalf of French critics like Truffaut and Godard, saying they were kind to festoon his canon with adulation, so to speak, but that he never intended to do anything but tell a good story. And somehow, though I haven’t heard or read anyone else call it out, Hawks must have known that the story he wanted to tell, languid and loose as it is, needed the subtle geographical linking of place to place. Thus: doors.

A movie that has as thin, but strong, a plot as this one, wants to grow a spine up its back like Dean Martin’s rehabilitating drunk does, and the spine in this case is the door-to-door familiarity of the town itself. Never do we stray from the saloon/hotel, the sheriff’s office, and the main street — the holy trinity of western locales, with a brief holy fourth moment in the corral, just to break up the monotony. But going through those doors with the frequency we do, infuses the few days we spend there with an air of casual intimacy: we’re alongside these characters rather than just watching them. In terms of audience involvement, walking into a room with a character is different than just cutting in mid-scene. All that walking and connecting the dots also helps zipper up the town into a hermetic bubble, sealed so tight from the outside world that even when the bad guys clop in to fetch their jailed murderer of a brother, they’re all but faceless, with no more flesh-and-blood presence than the anonymous citizens of the town.

So then, we have a bunch of doorways, our five or six main characters, and a shopworn western premise to warm ourselves by. What can we do in the midst of these humble genre trappings but see what the characters do with their down time. Well, Dino’s got his deep black sad charming thinking eyes on the bottle, Stumpy’s got his limping codger bit all cloaked in a deeply self-loathing sense of irrelevance, and The Duke’s got his swagger on for a gal from the wrong side of the law with the power to twist his drawl into a stammer, but his heart’s really hovering over the state of his old pal, Detox Dino.

When you look at the actors’ eyes in the scenes that aren’t about just another cowboy picture, but about the hardship and humor that come out of long lives spent together, like family, then you get to see actors committed to bringing something true to the fake western table. In the end, thankfully, the movie isn’t about the plot or about the genre, it’s about what real friends do while they’re experiencing an uptick in external forces. These aren’t people who become heroes because of the experiences they move through on the screen, they’re people who came to the party with baggage in tow — alcoholism, loneliness, broken marriages, impatience, dread of irrelevance — and it’s only secondary that the plot pot’s getting stirred just outside the door.