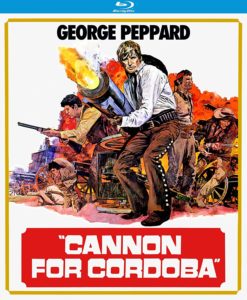 Cannon for Cordoba is a Western from 1970 starring George Peppard. It tries to bring a different spin to the western genre by setting it later than a traditional western, and having the primary goal be the infiltration of an impregnable fortress. Yet for all that, it ends up being a low-rent cross between The Wild Bunch and Where Eagles Dare. Like The Wild Bunch, Cannon For Cordoba is set on the US-Mexico Border in the years just before World War I. Yet, while The Wild Bunch used its 20th century setting to cast an elegiac tone for the vanished frontier, Cannon for Cordoba uses it just for some minor historical color. Aside from a few name drops like Pershing, its time period has little effect on the movie.

Cordoba (Raf Vallone) is a general leading a revolutionary army that has been making raids into Texas. The United States sends the Army, led by General John Pershing (John Russel), to stop him. Pershing brings with him six large cannons that he intends to use against the rebel forces. George Peppard plays Rod Douglas, who commands a small unit of special forces. Douglas, Jackson Hackard (Don Gordon) and Hackard’s brother (Richard Pendrey) attempt to infiltrate Cordoba’s forces and gather intelligence for the army. Cordoba’s gang captures Hackard’s brother. Under torture, he reveals the location of the cannons and Cordoba plans a raid to steal them for himself.

Despite Douglas’s attempts to get a warning to Pershing, Cordoba’s plan goes off without a hitch, and soon the rebels have six large guns protecting their mountaintop fortress. Pershing orders Douglas to get inside that fortress, destroy the guns and bring Cordoba out of there alive to stand trial. No small feat. He’s joined by a small band consisting of Hackard, Andy (Pete Duel), Peter (Nico Minardos), Antonio (Gabriele Tinti), who is a lieutenant in the Mexican Army, and Leonora (Giovanna Ralli) who wants to join the mission for her own personal reasons.

To someone in my generation, George Peppard is of course best known as Hannibal Smith from the television series The A-Team.  Peppard brings little of the swagger and charm he showed during the run of that show. Douglas is a grimmer, more bitter commander who doesn’t show any love for his plans, whether they come together or not.

Cannon for Cordoba was directed by Paul Wendkos, best known for directing three Gidget movies (Gidget, Gidget Goes Hawaiian, and Gidget Goes To Rome). Wendkos got his start directing at Columbia with 1957’s The Burglar, a moody film-noir. Though he directed 15 feature films between 1957 and 1971, he spent the bulk of his career working in television. Still, Wendkos and his cinematographer, Antonio Macasoli, know how to make good use of the widescreen frame. They compose their shots with a good eye for the fore-, mid-, and backgrounds. The two worked together before on Guns of the Magnificent Seven.

Cannon For Cordoba has some very effective action scenes, but the main plot doesn’t have a lot of tension. The misfit band of heroes has to get into Cordoba’s mountaintop fortress, destroy the cannons, and take the general alive. Aside from what seems to be a late-in-the-game betrayal of their plans, things pretty much play out as intended. As much as I love it when a plan comes together, it doesn’t make for an interesting story if it happens exactly as our heroes intended.

The real meat of the story is the relationship between Harkness and Douglas. Early on, after the two of them have infiltrated Cordoba’s headquarters undercover, they must watch the gang torture and kill Harkness’s brother. Harkness naturally wants to rescue him, but Douglas forbids it. They could intervene, but that would blow their cover, and their mission would fail. Throughout the rest of the movie, Harkness can’t look at Douglas in the same way again, and it becomes very plain that something is going to snap between the two men. The movie plays Harkness up as the real threat through the use of ominous music and glaring closeups. When the final confrontation between the two men finally occurs, it becomes the real climax of the film.

For the Blu-ray release, the picture and sound quality is excellent. Colors are vivid, and not overly saturated, and the image is suitably sharp. The disk includes trailers for other Kino Lorber western releases as well, but curiously there isn’t one for our feature presentation. There is also an audio commentary by Howard Berger, Nathaniel Thompson and Steve Mitchell.