The Things You Say, Marty 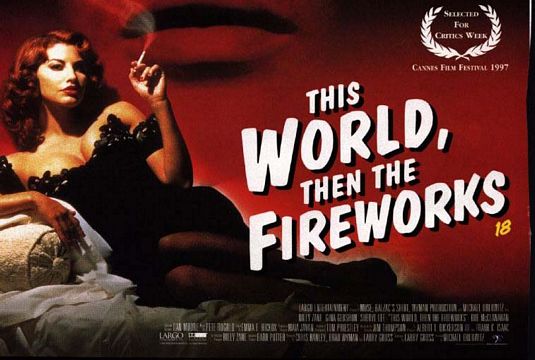 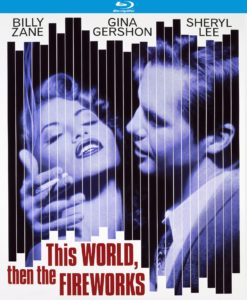 Contextualized, the quote heading this review occurs midway through hardboiled neo-noir This World, Then the Fireworks, where spiritually conjoined twins Marty and Carol coolly contemplate the fiery destruction they have wrought while sitting on the gleaming hood of a sleek-edge sedan. And while “the things you say” sounds like something one says to someone whose conversation is far from extraordinary, the content of that comment is among the most understated in all 100 minutes of the 1950s-set crime melodrama. Sex, violence, perversity, mayhem; the film more than lives up to the heightened stream of consciousness issuing from the maniacal yet poetic imagination of a charming sociopath. With the tat-a-tat rhythms of a crime reporter’s typewriter, This World, Then the Fireworks writes its world-beyond-fireworks large. 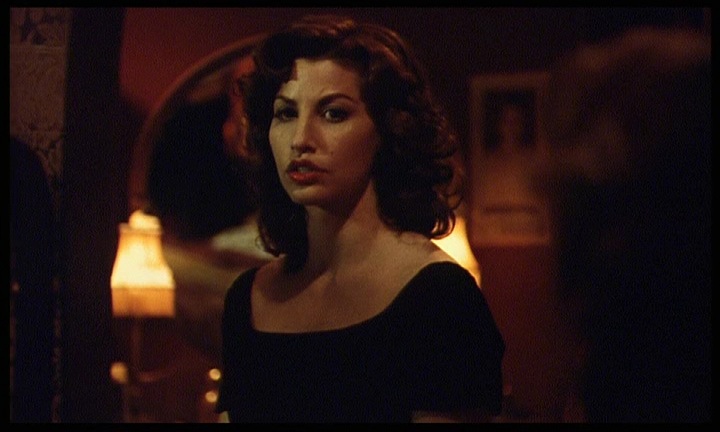 Based on a short story by 1950s and ’60s pulp fiction writer Jim Thompson (The Getaway), the 1997 period thriller capped a series of film adaptations which followed the late 1980’s rediscovery of the author’s long-neglected work. With his frightening ability to seduce a reader with the voice of a killer, per the title of his 1952 paperback masterpiece The Killer Inside Me, Jim Thompson represented the genre at its most explicit and extreme, and the reprinting of his work in the early ’90s offered renewed opportunity to translate his vision unfiltered to the screen. Starting with Stephen Frears’ The Grifters, James Foley’s After Dark, My Sweet, and Maggie Greenwald’s The Kill-Off, all appearing in 1990, filmmakers lifted the shadows and stylistic shrouds from the off-avenues and alleyways of noir and shone a harsher spotlight on its thematically darker corners. With director Michael Oblowitz’s ultra-stylish This World, Then the Fireworks, the soiled gloves were metaphorically off, giving free and terrifying rein to the savage art of Jim Thompson. 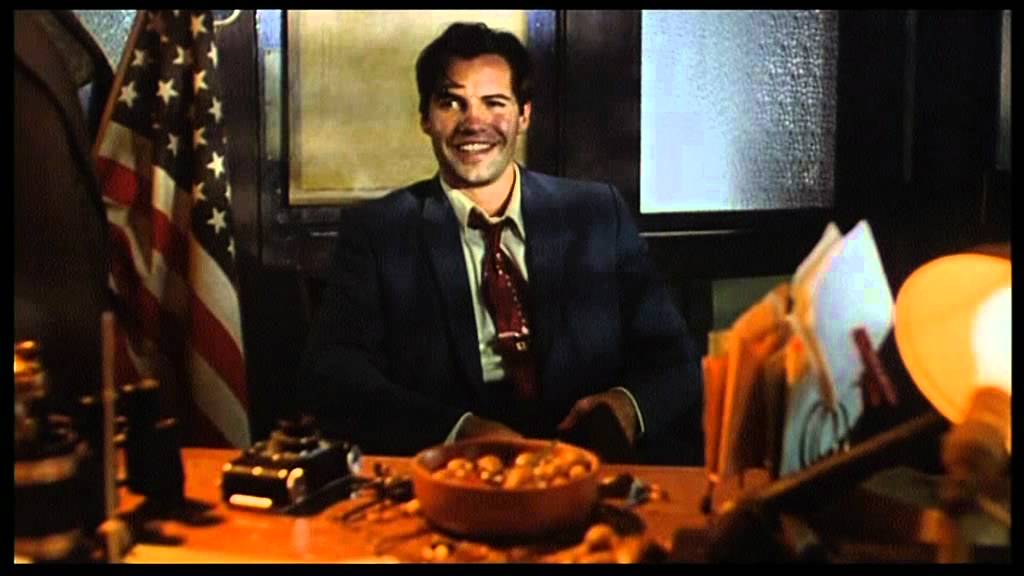 After a separation of three years, frighteningly close siblings Marty and Carol Lakewood reunite at the home of their ailing mother (Rue McClanahan) some thirty years after a Fourth of July tragedy involving their deranged father, a sawed-off shotgun, and the blown-apart head of a suspected philanderer. Marty, a sometime crime reporter, and Carol, a part-time prostitute, divide their time between each other and the various grifts and schemes that wreak havoc on their Southern California hometown. Seducing an off-duty cop named Lois Archer (Sheryl Lee) just after spectacularly storming off the tabloid crime beat, Marty preys on the desires and weaknesses of his wounded quarry with as equal aplomb as Carol mercilessly targets low-level mob enforcers and receipt-laden traveling salesmen. Both ruthlessly pursue their crooked ends, wielding sex and their considerable combined charisma like weapons, and their intense devotion to each other signals danger, if not outright death, to all they encounter. 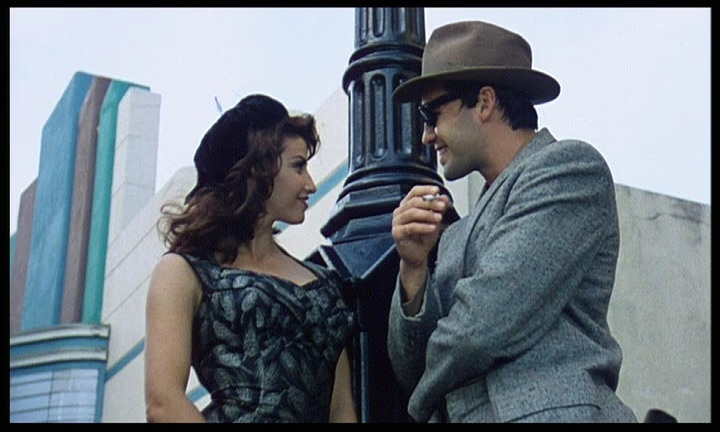 As played by Billy Zane and Gina Gershon, the toxic twins represent the world of Jim Thompson at its most sordid, with certainly the author’s most pointed criticisms of 1950s America implicit in their personalities, attitudes, and relationship. Spouting searing modernist addenda to the Ten Commandments even as he tells off his editor, or jams a paperweight through a private eye’s eye, Billy Zane’s Marty has a captivating smile that without warning turns upward into a murderously attractive sneer. Similarly, the Ava Gardner swish in Gina Gershon as Carol’s hips lures at least one vacationing insurance agent to his lustful demise. Their mutual devotion becomes that through which their victims reveal the secrets, lies, greed, and hypocrisies lying at the heart of Mr. and Mrs. Average Joe and Jane, along with the dry rot propping up the long rows of suburban houses with their white picket fences. As the most tragic and ultimately unhinged of their targets, the achingly beautiful Sheryl Lee is preternaturally vulnerable as the conflicted Lois, harboring secrets and surprises of her own, and for this viewer felt the actress’s most effective screen work outside the strangely complementary surreal vision of David Lynch. 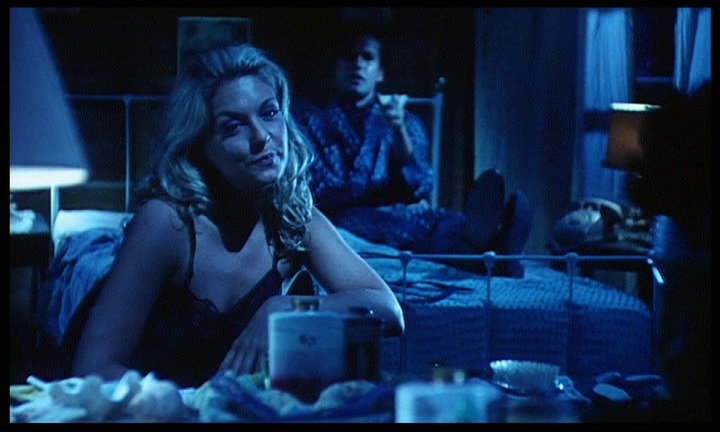 Kino Lorber’s Blu-ray release of this overlooked late ’90s indie again allowed this viewer to compare his former late ’90s midnight viewing on VHS in the more sober light of a high definition transfer and the passing of nearly two decades. If anything, the overheated and deliberately bizarre stylistic and narrative qualities that were off-putting for many viewers have actually gained in both seductive and hypnotic power with the intervening years. If the bold, stylized graphics of the opening credits fail to grab, or the silky smooth narration and brute force flashback lack seductive impact, then possibly cool jazz and smart suits and curved-edge convertibles are not for you. Making a great case for those who prefer their martini dry and with a twist, however, a half-hour’s worth of interviews with director Michael Oblowitz, who successfully made the transition between punk-era NY experimental filmmaking to commercial and then feature film directing, and screenwriter Larry Gross, who cut his teeth re-writing others’ scripts before ripping into pulp-sized plot-holes, jarring tonal shifts, and alcoholic nightmares, This World, Then the Fireworks remains the truest and most successful adaptation of Jim Thompson to yet reach the screen.

If one is to have any criticism of this film it is that some scenes, stories, and characters may be best left on the page; but if one were to honestly visualize the aforementioned sex, violence, perversity, and mayhem – a true trip into the heart of American darkness – then one cannot deny that Oblowitz and Gross successfully exorcised the demon of Jim Thompson: a writer who best said what was probably better left unsaid.

The images in this review are used only as a reference to the film and do not reflect the quality of the Blu-ray.