The Grandest of all Laundry Folding Movies, Just Waiting to be Discovered! 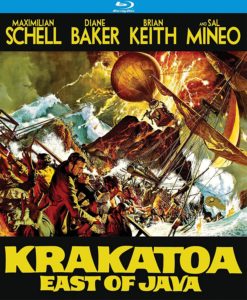 As far as major volcanoes go, Krakatoa was one of the most violent, most destructive, most deathly.  Its major 1883 eruption was a cataclysm that literally shook much of the planet.  Classified as the loudest natural boom in modern times, the explosion resulted in a death toll upwards of 30,000.  It was a natural disaster so massive that historians could not overlook it, despite its geographical placement firmly within the heart of the undeveloped world.

Just don’t look for it east of Java.  Turns out that the real life Krakatoa is actually west of Java.  The story goes that by the time the error was flagged up to the producers and studio, the publicity effort was far too far along to correct it.  The filmmakers would come to realize that although recorded history can be relative, compass directions cannot.  Fortunately, as glaring as this blunder is, it is the single worst offense of the entire Krakatoa experience.

Beginning with the Cinerama logo, Krakatoa, East of Java announces itself as the largest of spectacles.  Although this Blu-Ray doesn’t present the film in the Cinerama fans’ coveted “smilebox” format, the sheer intended bigness of everything is never out of sight.  If it’s not swooping beauty shots of the ship accompanied by Frank De Vol’s rip-roaring score, it’s the amped up melodrama going on below deck. 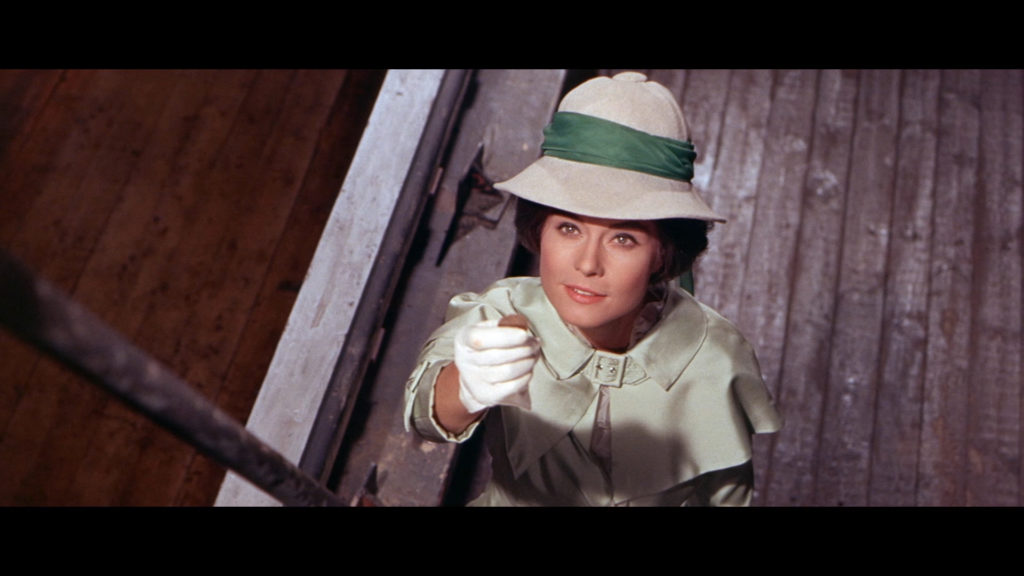 Diane Baker reaches out in the dynamic KRAKATOA, EAST OF JAVA.

Without hesitation, and an admitted degree of surprise, I am happy to report that all of it works.  Admittedly I was resigned to folding seven baskets of laundry while watching this film, but being dually experienced in both laundry folding and film watching, I believe I am qualified to report that neither goal suffered nor was conflated.  Krakatoa, East of Java is a largely forgotten film, and it simply shouldn’t be.

To steer straight into the obvious line, Krakatoa is a blast.

Dead-set in the Colonialist era, what starts out as a seafaring treasure hunt eventually evolves into a mission that is far more humanitarian in nature.  The 1999 David O. Russell film Three Kings came to mind several times, if only for thematic similarities.  Personal gain giving way to a quest for the greater good is always compelling in theory.  Krakatoa is no exception.  But are these professional plunderers ever truly able to let go of their original goal?  Everyone is driven by something.

Even in the absolute thick of homicidally crushing waves, Captain Hanson, clinched teeth, steely eyes, and all, never loses his cool.  Maximilian Schell is perfectly cast, evoking a sane and trustworthy version of James Mason’s Nemo.  Self assured and full of confidence, not even the last minute curveball of being handed thirty chained prisoners for state-mandated transportation can bring him down.  To think… all this confidence despite the fact that he’s taking his steamer, The Batavia Queen, ridiculously close to the tectonically unstable volcanic activity all in the quest of a sunken stash of priceless pearls that may or may not be there.  He’s picked a fine time to rekindle his relationship with Diane Baker, who fears her young son doomed on a nearby island. 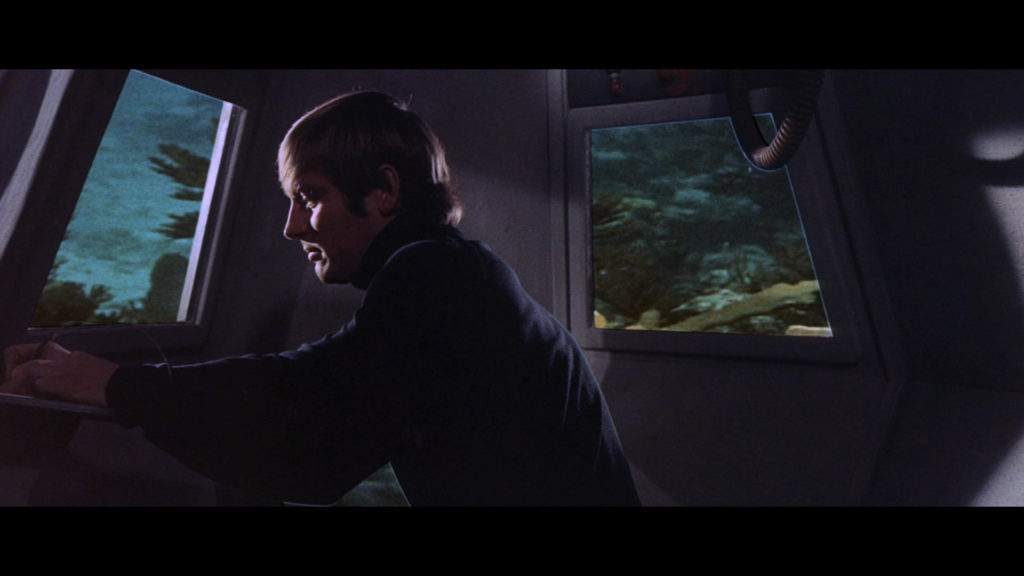 The diving bell is no butterfly in KRAKATOA, EAST OF JAVA.

The key players are present in exchange for an agreed upon cut of the fortune.  They’re well equipped, with a cool diving bell, its inventor/operator (John Leyton), a hot air balloon, with its father & son owner/operators (Rossano Brazzi & Sal Mineo), a hard drinking diver (Brian Keith) and his cute-as-button mistress (Barbara Werle) who does a rather chaste yet sexy striptease for his cranky self.  None of them, of course, have the slightest notion of what they’re in for.

Intent to find those pearls, the Batavia Queen is steered into the ferocious heart of the mess.  For the entire second half of the film, the volcano loudly and violently erupts like the world’s most elaborate Dianetics infomercial.  Water pounds everything, lava rocks fly everywhere, the ocean has never been angrier.  At one point, the balloon pilots must resort to a crazy naturally powered solution to try to escape certain death.

Prior to all of that, the first half of the film (it’s separated by a fade-to-black, intended for an intermission) establishes characters, their backstories and conflicts.  The melodrama may get a bit thick for some folks, but for a historical quest/disaster/effects film, no one is completely left in the ash. 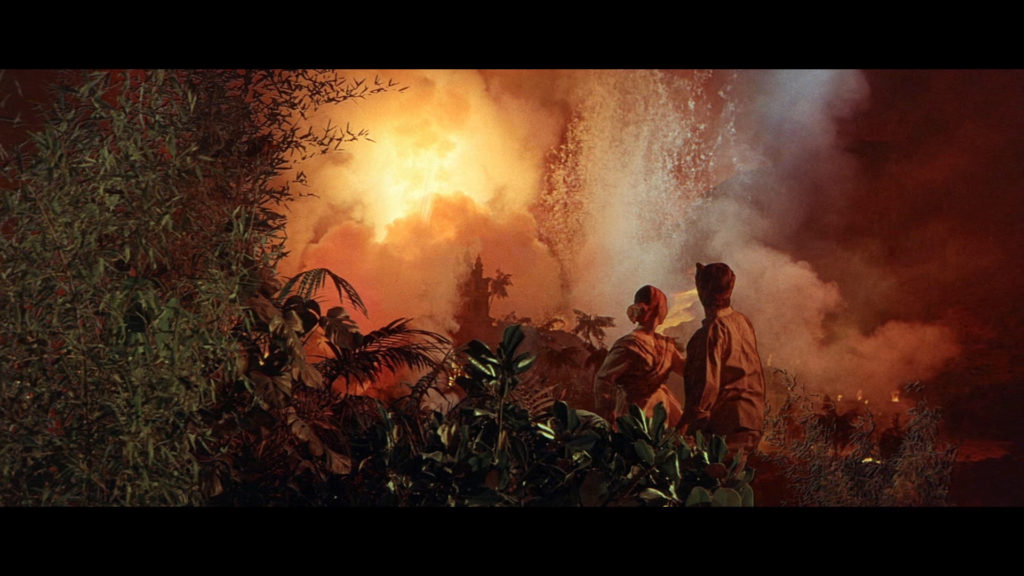 The name of the director, Bernard Kowalski, likely won’t ring many bells, as the bulk of his long career played out in episodic television.  Which is too bad, considering his apparent mastery of the pacing, pathos, visual effects, action, performances and scale of a film of this scope.  A few more now-forgotten theatrical outings, and Kowalski would be back to the tube for the rest of his days.  Of course, he’s also the uncle of mega-producer Brian Grazer (Apollo 13, 24), so it’s tempting to think that perhaps Kowalski’s mostly untapped talent reservoir for big screen grandiosity was funneled down the family line.

The only extras on this Blu-Ray are a few vintage trailers of other disaster films.  It’s a real shame that Kino Lorber didn’t trot out one of their regular film historians to provide some insightful audio commentary.  The entire film looks and feels striking, as intended from its inception.  Colorful and appropriately grainy, everything from the faces and locations (mainly ship bound, though never claustrophobic) to the fantastic miniature work pop to life.  And when the volcano blasts, it’s a perfect storm of sonic satisfaction.

To steer straight into the obvious line, Krakatoa is a blast.  As the age of classical cinematic bigness and spectacle was stumbling at a finish line of it’s own heritage and making, Krakatoa likely faded amid the shuffle.  It’s hard to imagine a film as pleasing as this one sinking so thoroughly from the public consciousness, but at least it’s been lovingly exhumed after all these years.  Hopefully Krakatoa West of Java remains dormant.  But Krakatoa, East of Java may finally be set to explode bigger than ever.