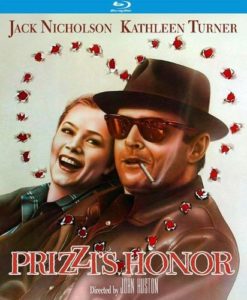 The cast, the cast, the cast.  Watch Prizzi’s Honor for the cast.  John Huston directed this dark 1985 mob-rom-com from a script by Richard Condon and Janet Roach, based on Condon’s novel.  Huston was nearing the end of a distinguished career that included films classics like Key Largo, Moby Dick, and The Treasure of the Sierra Madre.  In Prizzi’s Honor, Huston crafted a good story into a great film by virtue of an outstanding cast.

Charlie Partanna (Jack Nicholson) is a loyal foot soldier in the Prizzi crime family, almost literally born into the business.  The patriarch of the Prizzi clan, Don Corrado Prizzi (William Hickey) is Charlie’s literal godfather, and Charlie’s father, Angelo (John Randolph) is one of the don’t right hand men.  Charlie is a simple man and good at following orders – specifically, orders to off those who’ve crossed the family.  When he meets a beautiful stranger at a Prizzi wedding, it’s love at first sight for Charlie.  Unfortunately, the elegant woman who has caught his eye shares his career.  And thus the die is cast, with two mob hitmen (hitpersons?) in love and trying to navigate competing interests and competing contracts. 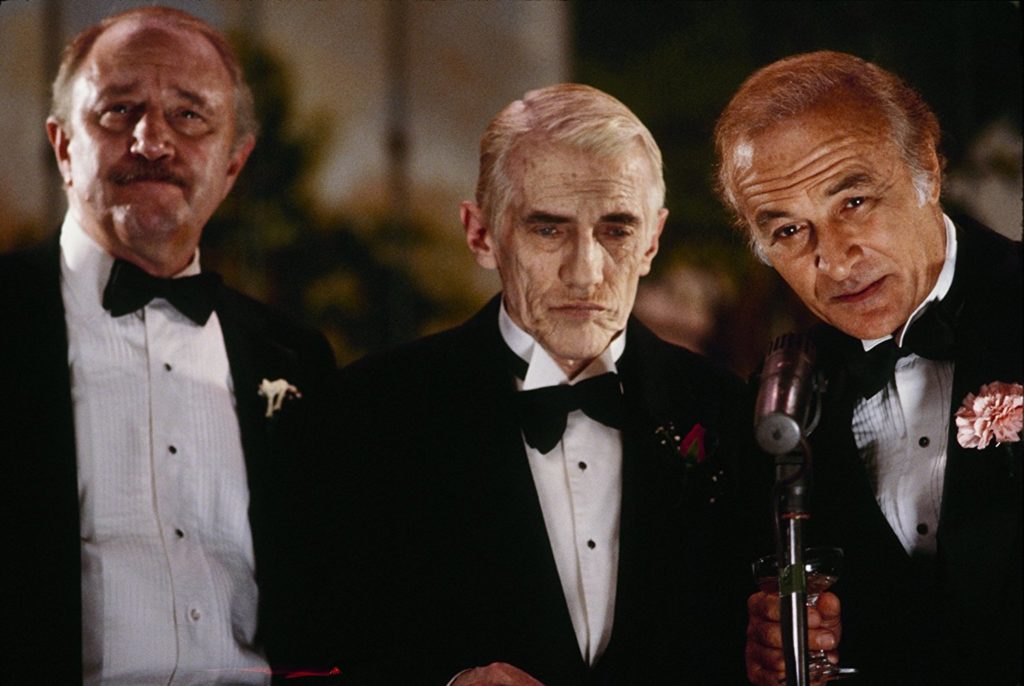 Jack Nicholson plays Charlie Partanna as a cross between Bogart and Brando – not the Brando of The Godfather, but an earlier mob figure, Terry Malloy of On the Waterfront.  Like Terry Malloy, Charlie is a man whose criminal history seems at odds with his tender conscience.  Once in love with Irene Walker (Turner) he is hopelessly hooked, even when he discovers that she’s lied to him more than once.  Turner is elegant and Waspish, with her deep, silky voice and shiny Breck-girl hair.  What would attract her to Charlie, clearly a mook, is hard to say – and the movie leaves ambiguous whether Irene’s feelings are as deep and genuine as Charlie’s.

As good as Nicholson and Turner are in the leads, it’s the other cast members who really elevate Prizzi’s Honor.  Hickey, nominated for an Academy Award for this role, is fantastic as Don Corrado.  He is shrunken, dessicated, with the palor of death and decaying, discolored teeth.  He is the very picture of corruption, as if Dorian Gray’s portrait had walked onto the set. One imagines that Don Corrado’s criminal acts have drained his life force until there’s nothing left but glee in defeating his enemies and intimidating his family, even his beloved granddaughter.  Never has an offer of a cookie between grandfather and grandchild seemed so threatening. 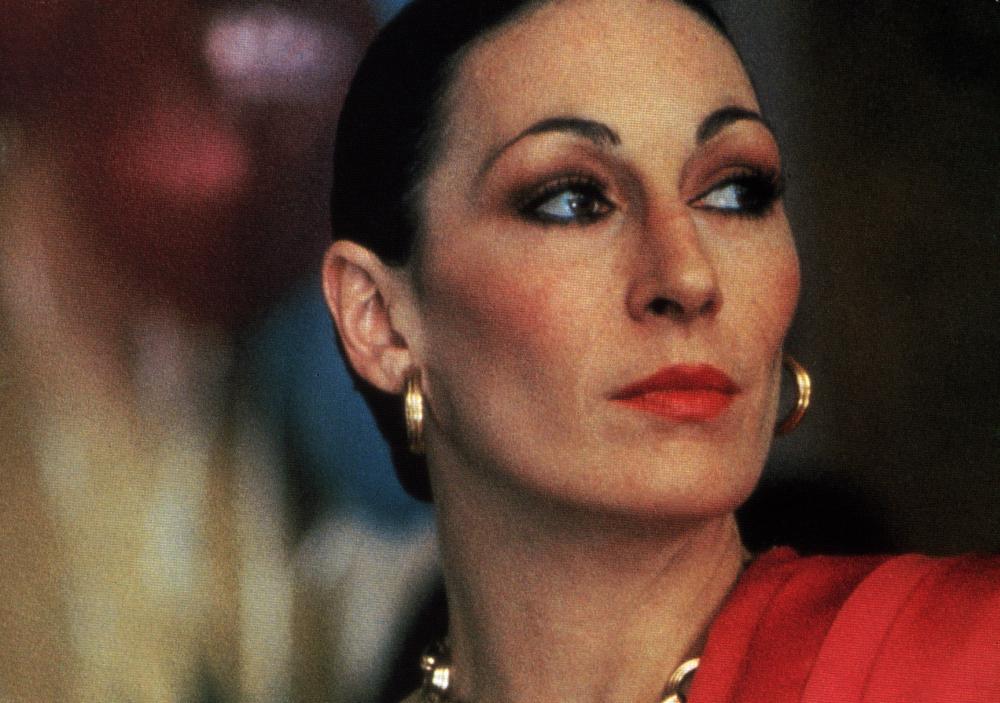 That granddaughter, Maerose Prizzi, was played by Anjelica Huston (John’s daughter), and the performance won her a well deserved Oscar.  Huston is sly and sinewy as Charlie’s spurned lover and old friend, a woman who has been shunned for years for bringing dishonor on her father.  Now, in Charlie’s new romantic misfortune, she sees both a way back into the fold and a path to revenge.  Maerose is sympathetic and cunning at the same time, her narrowed eyes and sharply angled features both sexy and menacing.  Huston’s performance is the best thing about this movie.

The cast is rounded out by distinguished character actors, including Robert Loggia.  You may not know most of them by name – Lawrence Tierney, Dick O’Neill, Joseph Ruskin – but you will almost certainly recognize their faces. 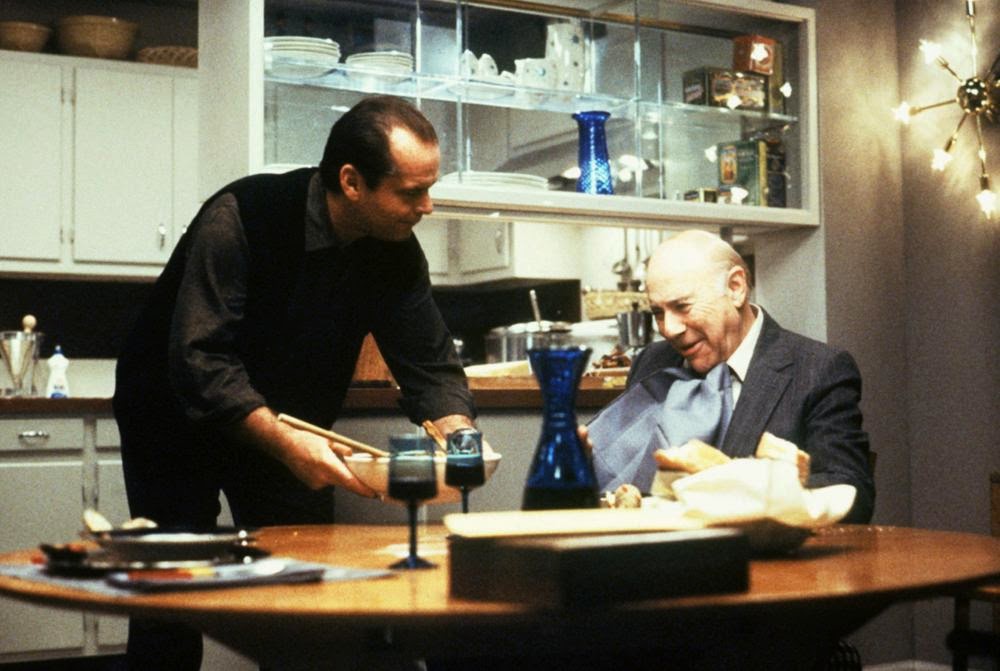 For all the talk of family and loyalty,  Prizzi’s Honor suggests that blood isn’t that thick after all, not when it comes down to business.  No betrayal, however small, is forgotten.  No offense goes unpunished. What’s honor among thieves and assassins, anyway? How can true love survive under those conditions?

Kino Lorber’s new Blu-ray of Prizzi’s Honor is rich both visually and in its rendering of Alex North’s glorious score, adapted from compositions by Puccini and Rossini.  Special features are minimal:  an audio commentary by Film Historians Howard S. Berger and Nathaniel Thompson, and trailers from a grab bag of films (The Missouri Breaks, The Unforgiven, The January Man, and Malice).  I’d like to award bonus points to The Unforgiven trailer for offering glimpses of the great Lillian Gish, but I’ll have to take them away after seeing Audrey Hepburn cast as a Native American.