Upon his recent passing, the time is right to represent my original opening weekend review of George A. Romero’s Land of the Dead, now rightly considered a seminal entry in his filmography. Please enjoy… 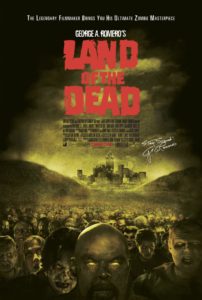 Despite the fact that Land of the Dead marks writer/director George Romero’s long-awaited return to the zombie horror niche he practically created with his seminal Night of the Living Dead in 1968, it’s kind of sad that this film isn’t opening to more fanfare. Granted, the last film in his Dead series, 1985’s Day of the Dead, disappointed the minute few who bothered to see it, but like the very zombies that occupy it, it has managed to rise from the video store graveyard, and meandered into a place of respect. For the afore-mentioned hardcore few, not since The Phantom Menace have fans of a director waited so long for a filmmaker to return to his famous saga. So it is with a bigger budget and cast of actual known actors that Universal quietly trumpets the longtime-coming George A. Romero’s Land of the Dead.

But is it any good, or should you be cocking your gun and aiming for the head? Fair question, considering that even I, an avowed fan of the first two “Dead” films (and a semi-appreciator of the third) anticipated this film more on general principle than suspected high quality. In short, I was ready to be disappointed by what appeared to be a paramilitary splatter-fest. Thankfully, from the get-go, I knew Romero hadn’t lost his touch. (Not that this isn’t a paramilitary splatter-fest.) Almost immediately following the vintage Universal logo (nice touch) and subsequent verbal recap of the zombie world situation, we are greeted with a macabre, hilarious off-key (to say the least) undead oompah band. Yes, that sinister wit that was so sorely missing from Day is back, and these zombies, courtesy of the great Greg Nicotero, look like some of the best to ever slowly stammer across a movie screen. (Even if they don’t sound like it.)

Yes, Dennis Hopper’s rich corporate political white-man character may be completely devoid of any human subtlety, but then again, so are the zombies. And they’re the reason anyone is seeing this film in the first place.

As fans of George Romero know, his best films blend his personal sociological views with blood-drenched prosthetics-created visuals. The lack of deeply felt characters is made up for with scathing observations of human nature and the United States. Romero’s Trojan horse of sociological commentary has become increasingly non-existent over the years. With this film, (as with his vaguely related recent six issue comic book mini-series, Toe Tags,) there’s no hiding his disagreement with the way things are in the world he lives in. I defy anyone to come out of Land of the Dead and claim that it was just another dumb zombie shoot-‘em-up.

It could be argued that the sense of reckless fun that draws audiences to these macabre features suffers for these heavy-handed messages, and further strips away any hope of the characters being empathetic, but that would be missing the point. Yes, Dennis Hopper’s rich corporate political white-man character may be completely devoid of any human subtlety, but then again, so are the zombies. And they’re the reason anyone is seeing this film in the first place. (Plus, it’s freakin’ DENNIS HOPPER playing the role!) But fear not, splatter fans, the ceaseless zombie action is plenty sufficient.

Speaking of Hopper, it’s interesting that he essentially launched his career with a scathing view of modern America – Easy Rider – and is now spending the ladder part of his career in a very different but equally American-scathing film. Not that Land of the Dead can ever hope to pack the cultural punch that Easy Rider did, but one needn’t look far for a shared artistic worldview between the legendary directors of the two pictures. Hopper is obviously having a ball as the bigwig owner/operator/ruler of the high-class enclosed skyscraper society, Fiddler’s Green.

Chewing nearly as much scenery is John Leguizamo, a rebellious member of an outside ragtag team of zombie bashers led by the bland Simon Baker. Leguizamo’s character is arguably more deplorable than Hopper’s, making for good post-film fat-chewing. Less utilized is the always eye-pleasing Asia Argento, notable here only because of her famous father, horror master Dario Argento, producer of the original Dawn of the Dead.

There are a good half-dozen notable supporting performances of human characters that are in some way physically abnormal. Burn victims, midgets, and massively obese people consciously and visually serve to further tighten the gap between the living and the living dead in this series. The handful of notable zombie cameos has been well noted, but Tom Savini (reprising his Dawn thug) is the primary showstopper, with his single shot assault. Honestly, I forgot to look for the cameo-ing Shaun of the Dead guys Simon Pegg and Edgar Wright, but I’m sure I’ll catch them next time. 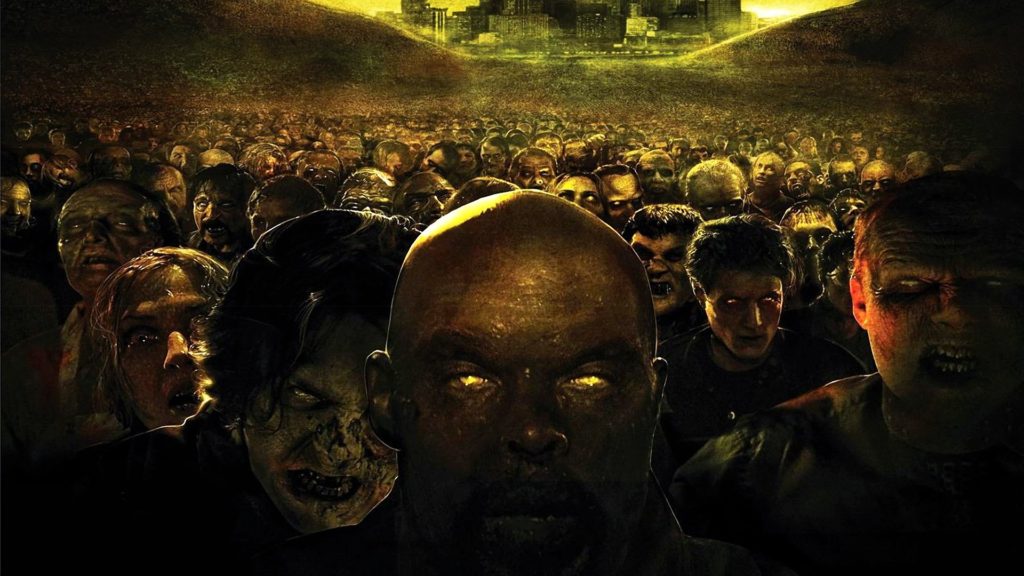 There will be a number of ignorant scoffers walking out of Land of the Dead, unable to reconcile the barrage of gore, left-wing sentiment, and lack of truly chilling horror. On the level of pure fright, this film is miles away from Night of the Living Dead. It does, however, measure up pretty well with the other two, ranking somewhere in-between them in terms of overall quality. Land is not without its flaws, of course. First off, it is unfortunate on a purely traditional level that this film didn’t shoot in Romero’s adopted hometown of Pittsburg, PA, opting instead to let tax-incentive granting Canada double for the town. Script-wise, every characters shared obsession for a high tech zombie smashing battle wagon known as Dead Reckoning is a little baffling, considering that if the surviving humans managed to build one of these things, why couldn’t they build more? Also, the blatant 9/11 metaphors, analogies, and political observations will surely alienate a portion of the audience, but agree or disagree with Romero’s views, all should unite on the notion that these zombies are friggin’ awesome.

The Romero zombie film is back from the dead. I suppose I should be happy Universal gave Romero what appears to be a lot of money (at least by his usual standards), but I can’t shake the fact that they aren’t launching the promotional fireworks (or as the film calls them, “sky-flowers”), thus notifying the world to stare up in awe at this powerful display. Fireworks are the one truly effective weapon against the zombies, and when you see why, and take a moment to consider the varying levels of the clever gag, you’ll be on the track to understanding what sets a Romero zombie film apart from the countless imitators that have been decomposing on screens for decades now. The cinematic zombie apocalypse is going just a little bit better now that we’ve entered the Land of the Dead.

This review originally appeared on June 24, 2005 at TwitchFilm, now known as ScreenAnarchy.com.