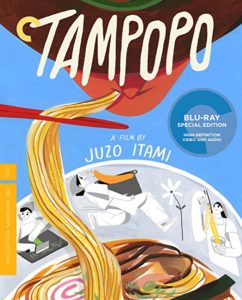 In the mid-1980s, Juzi Itami’s decidedly off-kilter Tampopo was an art house hit in the U.S. and elsewhere, even after the populace of its native Japan turned up its collective nose to it.

Today, despite falling out of decent availability for many years, Tampopo is considered not only one of the greatest food movies ever cooked up (just try watching it and not craving ramen afterwards!) but also a free-flowing and effervescent comedy. It is an out-of the-gate masterpiece for filmmaker Itami; an unusual film that has fondly stuck with so many who first saw it decades ago.

Tampopo (the Japanese word for dandelion) is a single mother run ragged, foisted into an existence she never asked for: that of running an inherited ramen stand. In the title character’s subsequent embrace of her plight through upward reinvention, Tampopo is full of equally memorable detours and tangents. Characters come and go throughout seemingly arbitrary vignettes ala Fellini’s Roma or so much of Bunuel, but without the perceived intellectual baggage nor the notoriousness of those specific creators. That’s not to say Tampopo is in any way slight or frivolous – far from it. As a whole, Tampopo proves to be a most inspired and invigorating consideration of food and its broader role in our lives, our relationships, and our varied cultures and classes. 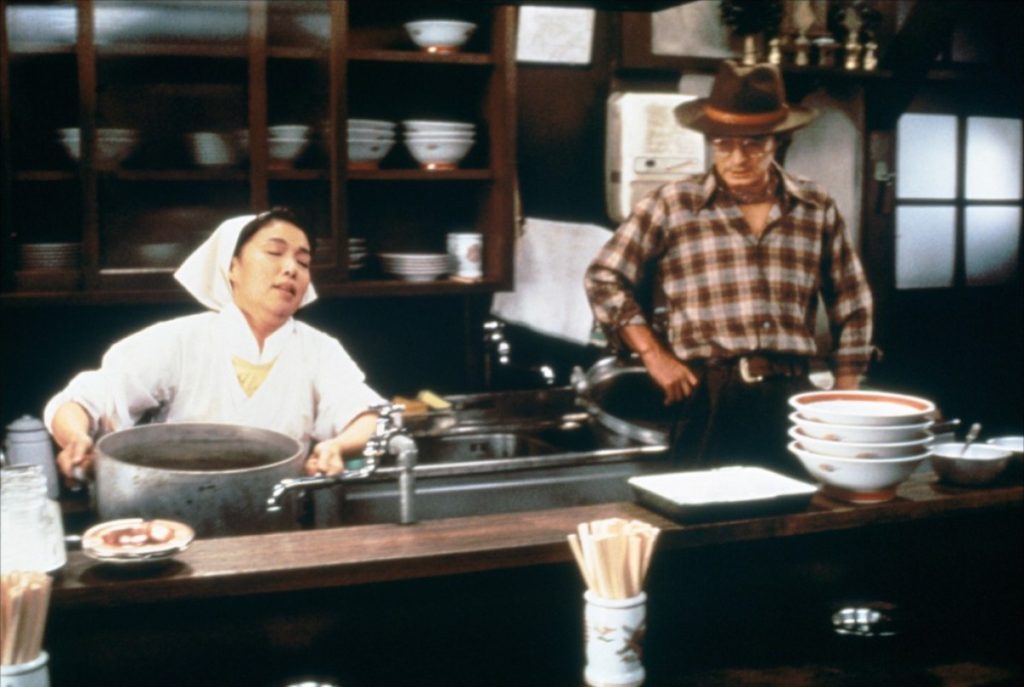 Tampopo, played by Nobuko Miyamoto (left), is put through the paces by Gorô (Tsutomu Yamazaki).

Nobuko Miyamoto is absolutely radiant as Tampopo, a living magnetic field of human empathy with a dose of charm. When she makes the momentary decision to turn herself over to Gorô (Tsutomu Yamazaki), a handsomely rugged truck driver she only just met who seems to know a thing or two about ramen, we, like Gorô and his sidekick Gun (a very youthful Ken Watanabe), are immediately on board with seeing her to her goal. That goal being the successful quest for crafting the perfect bowl of ramen.

Criterion has loaded this special Blu-Ray release with all the fixins.

Gorô, sometimes questioning his own good sense in the matter, puts her through a fairly hilarious training regiment like something out of Rocky. She will imitate, copy, sweet talk and even steal the secrets of all the greatest ramen cooks in town, and appropriate their techniques to realize the Citizen Kane of ramen. There’s a certain endearing lawlessness about her approach, hence the clever branding of Tampopo as a “ramen Western”. (Although it does indulge some spaghetti as well, however briefly.) 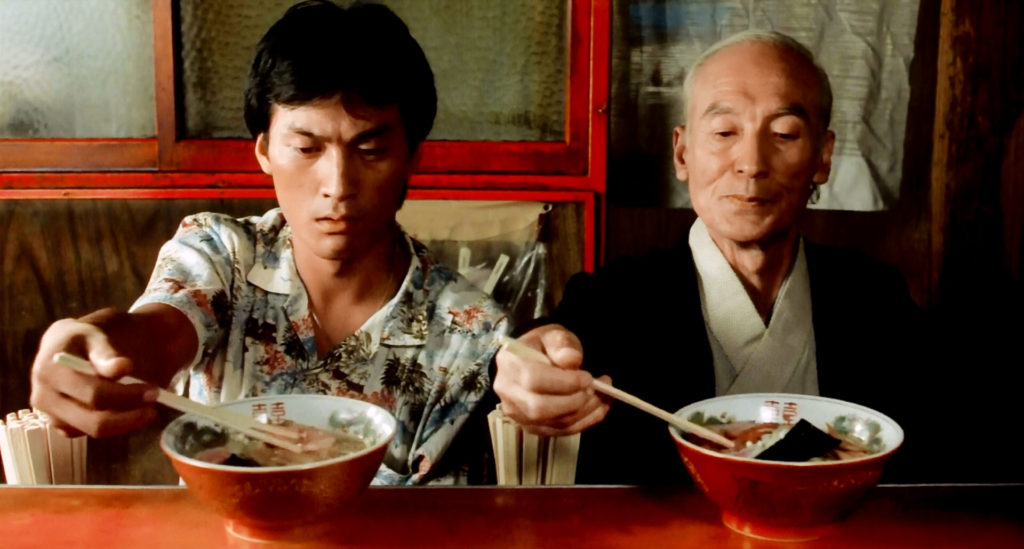 Foodies in the know are quick to claim Tampopo, but cinephiles are nipping right at their heels. Which is actually all good, as Itami is indelibly interested -scratch that… enamored with both food and cinema. The most obvious example of this is the inclusion of an enigmatic nameless classic Hollywood gangster type in a white suit, played by Kôji Yakusho. Intermittently, Itami cuts away to this character as he unconventionally ponders movies, mortality, and male/female dynamics. He and his gorgeous moll (Fukumi Kuroda) share a food-filled solitary lovemaking scene that parents should be aware of as it goes further and tops the similar scene in 9 1/2 Weeks in a quarter of the time. Later, and unforgettably, in a moment as sensual as it is strange, they pour a raw egg yoke back in fourth between their mouths. Immediately, in a movie theater, he breaks the fourth wall to ponder our own passive voyeurism as moviegoers, and how it all might relate to our inner lives, and even death. This is, all the while, still a comedy.

There’s a thin fascia of sharp wit surrounding the whole of the movie and it’s coy light-as-a-feather demeanor. The off-kilter yet precisely realized world of Tampopo is one more reminiscent of lighter Australian fare, as opposed to Japanese. Perhaps this played into its initial at-home rejection. 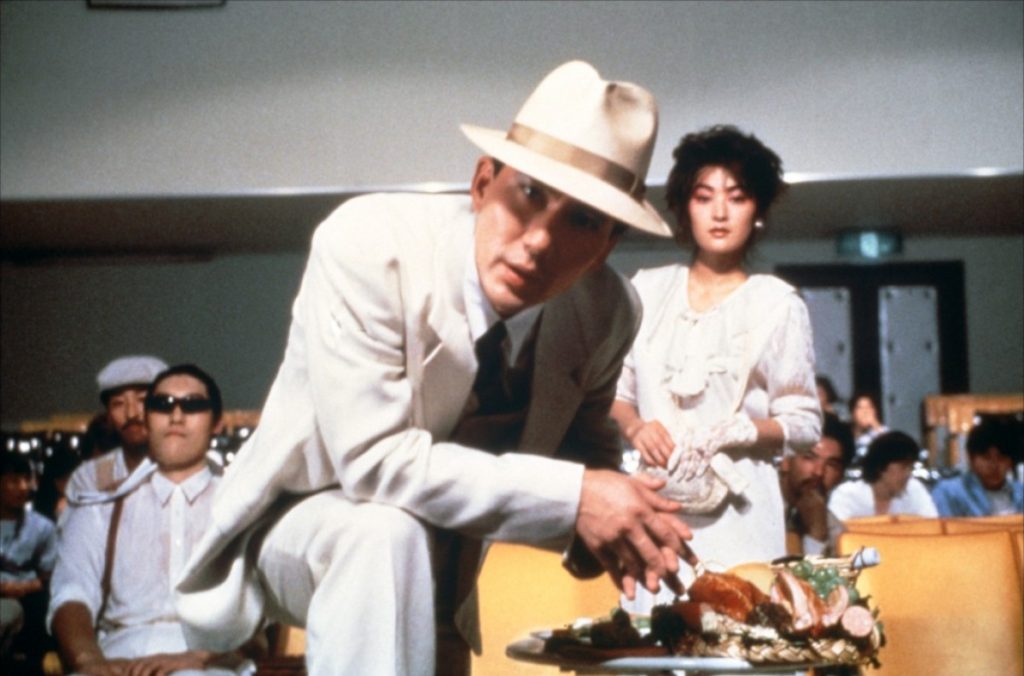 In any case, it wouldn’t stay rejected. Tampopo’s own following is set in stone, and well earned. Itami gathered a devoted fan following, even as his ensuing filmography never delivered another meal quite this satisfying. His own 1997 suicide is a harsh clouding of the broth he’s so perfectly served up, leaving his wife Miyamoto (newly interviewed for this Blu-Ray) to carry his own and the film’s legacy.

Criterion has loaded this special Blu-Ray release with all the fixins. Between the fantastic printed essay, the contemporary interviews, and vintage behind-the-scenes material, it’s difficult to come up with any fresh insights without regurgitating what’s already here. So much is served up in the way of observations, memories, and musings, spotlighting both the food angle and the cinematic.

Among them, we get an engaging ninety-plus minute vintage Making Of video hosted by Itami, an interview with the film’s food stylist, talks with many professional “ramen scholars”, Itami’s 1962 debut short film, a video essay, and the new re-release trailer.

Indeed though, there will always be so much to say about Tampopo. The conversation will continue for a long time to come, thanks to the new 4K restoration of the film, which screened theatrically earlier this year. Whether you missed it then, saw it and loved it, or are only now hearing about this delicious dish for the first time, don’t be a wet noodle – check out Criterion’s exceptional Blu-Ray soon!