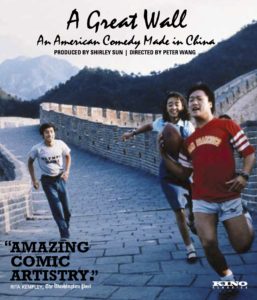 I forget sometimes that just a handful of decades ago Communist China remained largely a mystery to the West.  Tourism was limited and information coming out of the country was tightly controlled.  President Nixon’s trip to the People’s Republic of China in 1972, after 25 years of diplomatic separation, was the first step in normalizing relations between China and the United States, but it was still a long journey from that trip to where we are now; with a vast web of economic, political, and cultural ties between the our countries.

A Great Wall was made when China was still in the early stages of opening to American interests,  providing the backdrop for this film’s claim to fame.  A Great Wall was the first American film shot in Communist China, and it captures the shift that was already underway as younger generations of Chinese citizens began to reflect Western influences (this was just three years before the Tienanmen Square protests).  Shirley Sun, the Chinese-American producer of the film writes that when she screens A Great Wall in China now, “audiences are touched by a nostalgic feeling for…when traditional neighborhoods had not been demolished to construct outsized high rises, and when people had time to savor human contact instead of competing frantically for basic survival and material gain.”

American audiences can watch A Great Wall with nostalgia, too.  Although the movie is primarily set in China it is very  much an ’80s American film, with its synth soundtrack; attractive, fashionably dressed young adults; and a climatic ping pong match with a tone that brings ’80s classics like The Karate Kid to mind.

What happens isn’t so much culture clash as cultures gently bumping up against each other.  Peter Wang gives a charming, expressive performance as a man in midlife recovering a lost piece of his identify.

Shirley Sun and director Peter Wang co-wrote A Great Wall, the story of a Chinese-American computer programmer (played by Wang) taking his family to visit the country he left as a youth.  Leo Fang has worked hard in San Fransisco and achieved middle class American success.  He lives in a ranch house with his American-born Chinese wife, Grace (Sharon Iwai) and their tall, muscular, jock son, Paul (Kelvin Han Yee), a Stanford student.  When Leo is passed over for a promotion at work he’s convinced it’s because he’s Chinese, and quits his job.  That creates space in his life for the trip to China he’s been talking about for years, to visit his sister and her family and reconnect his with homeland. 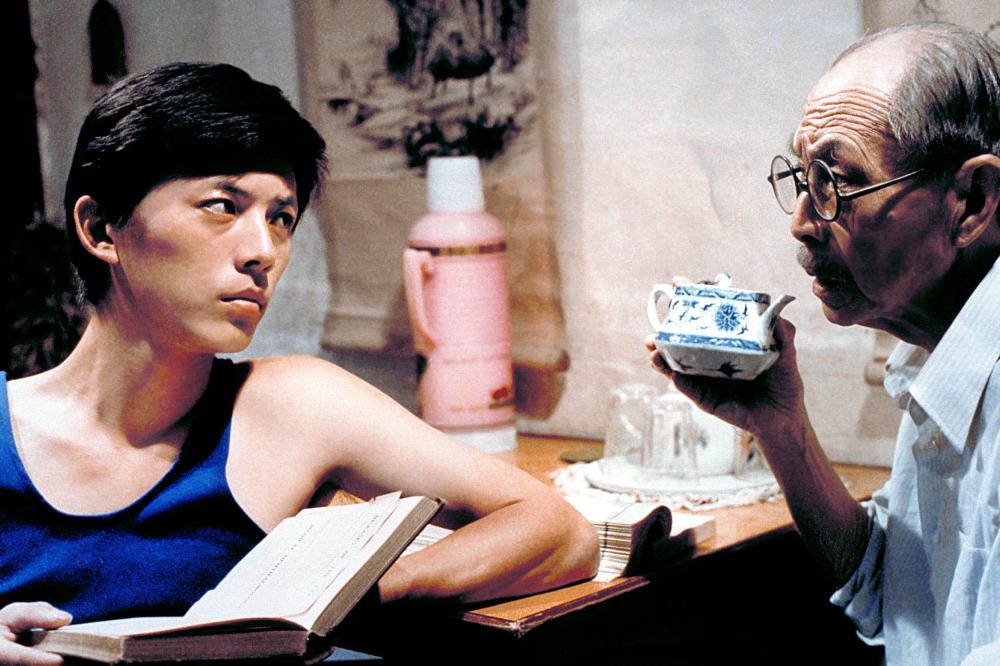 In Peking the Fangs stay with Leo’s sister, Mrs. Chao (Shen Guanglan), her husband (Hu Xiaoguang) and their daughter Lili (Li Qinqin).  We’re also introduced to Lili’s serious school friend Liu Yida (Wang Xiao) and his  laidback pal, Yu (Jian Xiu).  There’s culture shock for the Fangs, of course, but it’s more modest than I expected.  The differences are perhaps harder on the Chao’s.  Mr. Chao is unsettled by how casually Paul treats his father.   Mrs. Chao is shocked when Lili demands that her mother stop opening and reading her mail (Paul having taught her about the American expectation of privacy). In one of the funniest moments in the movie, Mr. Chao assumes that Paul is wearing a linen blazer with patched elbows because his family is poor.  Paul protests, “But it’s Pierre Cardin!” Still, real tensions between the families are few.  Grace, who doesn’t speak Mandarin and only knows how to make one Chinese dish, is eager to be accepted by her in-laws.  Paul slides into his cousin’s social circile with ease (making the intense, opera-loving Liu jealous).  Meanwhile, Leo embraces the experience of being home.  He weeps while listening to Chinese folk music (in a beautifully rendered scene which gives plenty of space for the audience to appreciate the elderly singer’s performance), practices tai chi alongside Mr. Chao, visit’s his father’s grave.  There’s not much plot in A Great Wall, and what occurs isn’t so much culture clash as cultures gently bumping up against each other.  Peter Wang gives a charming, expressive performance as a man in midlife recovering a lost piece of his identify.  While the supporting cast is all fine, Hu Xiaoguang gives an especially strong performance as the kind, quiet Mr. Chao.

Of course, the Fangs return from China changed by their visit.  When we see them back in their San Francisco home, Grace is in a traditional Chinese blouse and Leo is practicing tai chi in their backyard.  There is a strong hint that he’s recovered his job, but Leo is not simply the ladder-climbing careerist that he was before.

Kino Lorber’s new Blu-ray edition of A Great Wall looks and sounds great, although the bouncy synth score wears a bit on 21st century ears.  While there are no extras on the disc, a booklet is included featuring a number of stills, an essay on the making of the film by Shirley Sun, and an essay on the film’s lasting impact by critic Oliver Wang.