Max on Movies: THE BOSS BABY 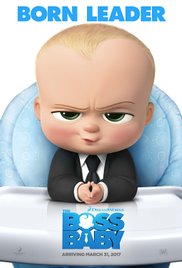 Ever wonder where babies come from? Turns out there’s a massive corporation, Baby Corp, up in the heavens. At Baby Corp, new life is separated into two factions: newborn goo-goo-gaga types, and serious-suit-wearing management types. This is the story of one of the babies in management.

The Boss Baby (Alec Baldwin) comes to earth masquerading as a regular baby in order to gain intel on Baby Corp’s rivals, Puppy Co. You see, there is only so much love in the world to go around, and Baby Corp is concerned that families will adopt puppies instead of have babies.

The Boss Baby comes to live with the Templeton family, which doesn’t sit too well with their 7 year old son Tim (Miles Christopher Bakshi, grandson of animation giant Ralph). Tim is an imaginative kid who loves playing spaceman or pirate in his backyard, as we see during fun make-believe sequences before his new baby brother arrives.

Tim’s parents Ted (Jimmy Kimmel) and Janice (Lisa Kudrow) assure him that there is enough love in their family for the four of them. Tim isn’t so sure. He’s used to being an only child. The final straw comes when mom and dad sing the song they’ve always sung as a lullaby for him, The Beatles’ “Blackbird,” to the new baby. Something must be done about this interloper.

While I appreciate The Boss Baby tackling sibling rivalry in a fun way, not much about this film’s universe makes sense. There exists technology from Baby Corp that can erase family memories after baby missions are finished. How long have they had this tech? Management babies drink a special formula of milk so they never grow older. WHY? And don’t get me started on Puppy Co. The weakest element of The Boss Baby is the Baby Corp/Puppy Co. conflict, right down to a twist involving Puppy Co. CEO Francis E. Francis (Steve Buscemi), that you can see coming a mile away.

Miles Christopher Bakshi does a fine job voicing Tim, a character that is smart and sympathetic. Tobey Maguire narrates the film as an older version of Tim, but his presence is unnecessary. I could say the same for Kimmel and Kudrow as Tim’s parents. They’re just kind of there.

His references to Glengarry Glen Ross (“Cookies are for closers!”) are dated rather than clever, but having Alec Baldwin voice Boss Baby is a stroke of genius. He really makes the character work. Who is this character? It’s a baby in a suit. That’s funny. There’s not much more to Boss Baby, but sometimes a baby in a suit is enough.

The Boss Baby is a better family film than similar caliber fare such as The Secret Life of Pets or Trolls. The animation is quite good and it’s a perfectly fine distraction for kids under 10 who still crack up at bodily humor. I took my six year old son Oscar to see this movie and while the credits rolled I asked him what his favorite part was. His reply? “When the Boss Baby tooted.”