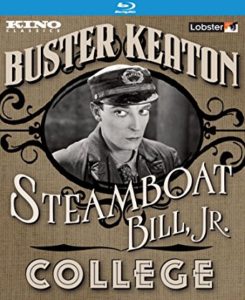 Each time I watch one of Buster Keaton’s films I feel as if I am seeing magic performed – and real magic, not tricks.  I cannot for the life of me understand how a human being could do what Keaton did, without some sort of sorcery involved.  He leaves me perpetually slack-jawed.  Buster Keaton, one of the greatest comedians of the silent era (alongside Charlie Chaplin and Harold Lloyd) was nicknamed “The Great Stone Face” because he performed everything from pratfalls to breathtaking stunts with an unshakably impassive expression.  But that nickname doesn’t quite do him justice.  Keaton had angular features and large, heavy-lidded eyes, and, oh, he could act with those eyes!  With just the tiniest shift of his gaze or the lowering of his lids he could reveal a whole range of thoughts and emotions.

If you haven’t figured out it yet, I’m a bit gaga for Buster Keaton.  There have been many fine performers over the last hundred-plus years of movie history, but far fewer geniuses.  Buster Keaton was a genius.  Or maybe a wizard. 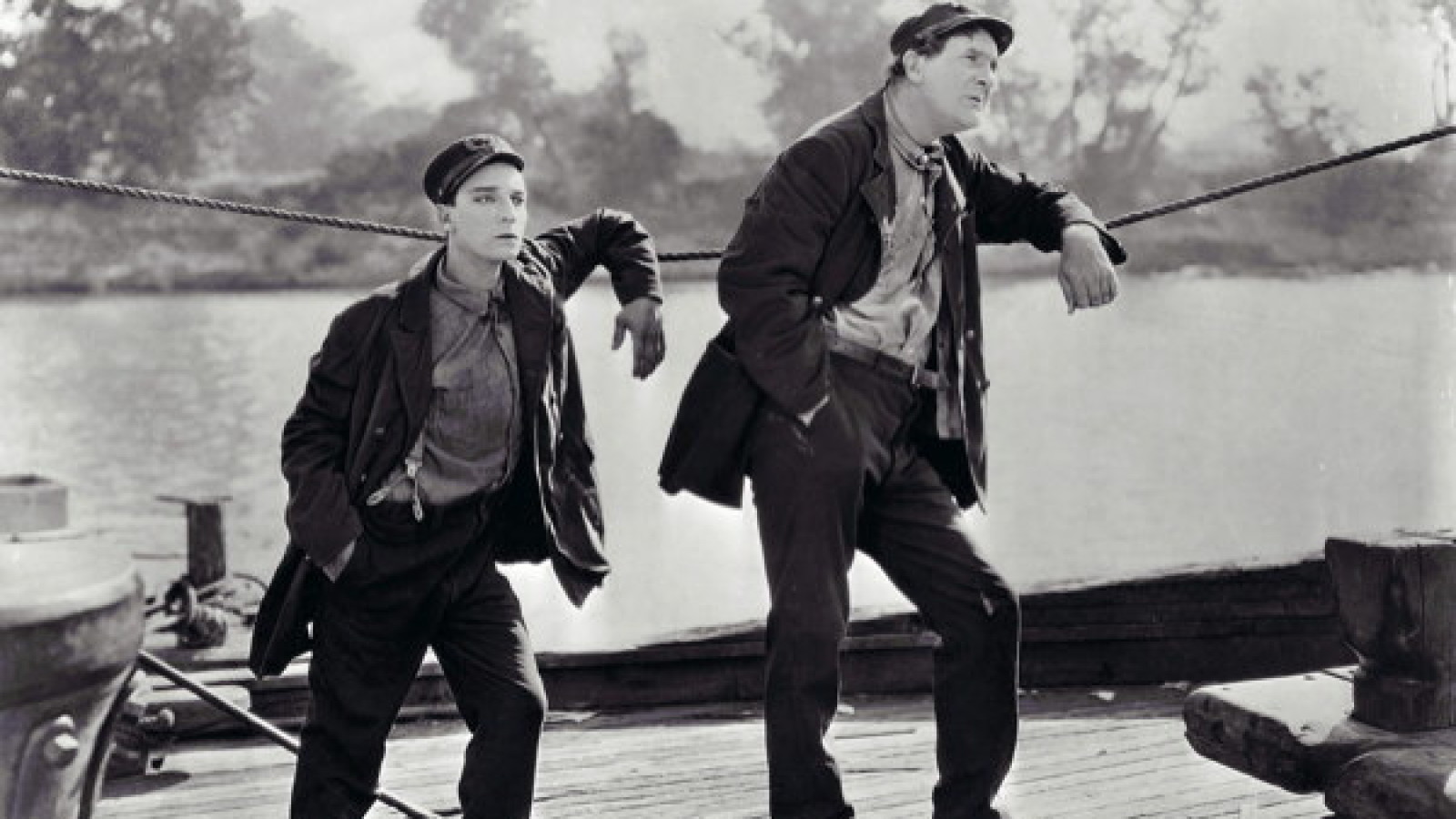 Kino Lorber Classics has released a beautiful new two disc set of Steamboat Bill, Jr (1928) and College (1927), films that came late in Keaton’s silent career.  Neither of these movies are among Keaton’s greatest works, but a lesser Buster Keaton film is still far above that of most other comedians.  Steamboat Bill, Jr., in particular is a delight.  Keaton (by then in his early 30s) plays a young man just graduated from college and going to visit his father for the first time since infancy.  Young Willie, with his beret, pencil thin mustache, and ukulele is a disappointment and an embarrassment to his father, a burly steamboat captain (Ernest Torrence).  There’s plenty of both comedy and pathos mined in the father/son relationship, but the film is best known for a lengthy storm sequence which destroys the town and affords Willie the opportunity to prove himself a hero after all.  It also includes an encore of one of Buster Keaton’s best known stunts, in which a house fall around him – just barely around, rather than on him.

There have been many fine performers over the last hundred-plus years of movie history, but far fewer geniuses.  Buster Keaton was a genius.  Or maybe a wizard.

Like Steamboat Bill, Jr., College is the story of a young man trying to prove himself to those who see him as weak or ridiculous.  In this case, though,  it’s all for the love of a girl.  Ronald was the top of his class in high school and considered sports a waste of time.  The girl he pines for (Anne Cornwall) won’t see Ronald unless he gives sports a try.  And so try he does, through much of the movie.  Keaton mines baseball, crew, and a wide variety of track and field events for laughs as Ronald tries and fails, over and over again.  His haplessness at baseball is especially funny.  It’s a marvel to watch Keaton, obviously lean and muscular, so effectively feign being weak and clumsy.  Ronald also strikes out at a couple of part time jobs, and the scene of him as a soda jerk – completely confident and thoroughly incompetent – is a highlight.

Others received credit for directing Steamboat Bill, Jr. and College, but don’t be fooled.  These were Keaton projects and he deserves the credit for all that’s good about them.

This is a wonderful Blu-ray release, using new 2K restorations by Lobster Films and music by the Mont Alto Motion Picture Orchestra.  Both films include introductions by Serge Bromberg of Lobster Films (home of the crowd-funded Keaton Project, restoring Keaton’s entire catalog of short films).  Steamboat Bill, Jr. also includes audio commentary by film historians Michael Schlesinger and Stan Taffel, and a vintage Alka-Seltzer commercial starring Buster Keaton.  Special features on College include audio commentary by film historian Rob Farr, Run, Girl, Run (a silent comedy short starring Carole Lombard) and The Scribe, a 1966 industrial film that was Keaton’s last screen performance.  It’s a bit sad watching him at that point in his life (he died that same year):  better to go back to College and Steamboat Bill, Jr. and see one of the great treasures of filmmaking in his prime.