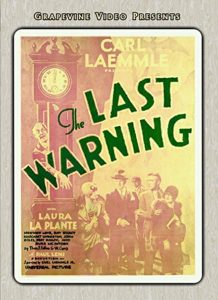 Paul Leni’s final film is a treat for the eye and the mind as he riffs on the “old dark house” genre and morphs it into a 77-minute murder mystery.

The film opens with a multiple-exposure montage of Broadway in all its finery in 1929. The establishing montage stabilizes as the police run into the theater in which John Woodford has just been killed. With many suspects, the police have their work cut out for them. The case goes cold for several years until a producer stages a revival of the show in which Woodford met his grisly end—and that’s when ghostly notes and apparitions begin to appear. Who is guilty?

Laura La Plante, Leni’s female lead in his previous film The Cat and the Canary, is a capable leading lady in this as well. La Plante’s character does not show her emotional cards too early and the audience is given time to process what they think of her. Her love interest, portrayed by John Boles, is a bit beneath her, but his facial expressions are worth the price of admission even if his performance lacks the panache and gravitas a leading man ought to have. Roy D’Arcy, a favorite villain of mine, is in the cast as well. While not his finest performance, his lurking about lends a lot of fun to the production. For those who are fans of Chaplin films, Mack Swain is also in this cast as Robert Bunce, one of the owners of the theater. (Swain, you may recall, was in Chaplin’s enormously successful and engaging The Gold Rush.) In addition to a stellar cast, humor is sprinkled throughout. Unfortunately, the humor seems to weigh the plot down at times. The characters are all well-worn tropes—and were, even at the time of the production. However, Leni’s style and presentation make it a fun film even so. 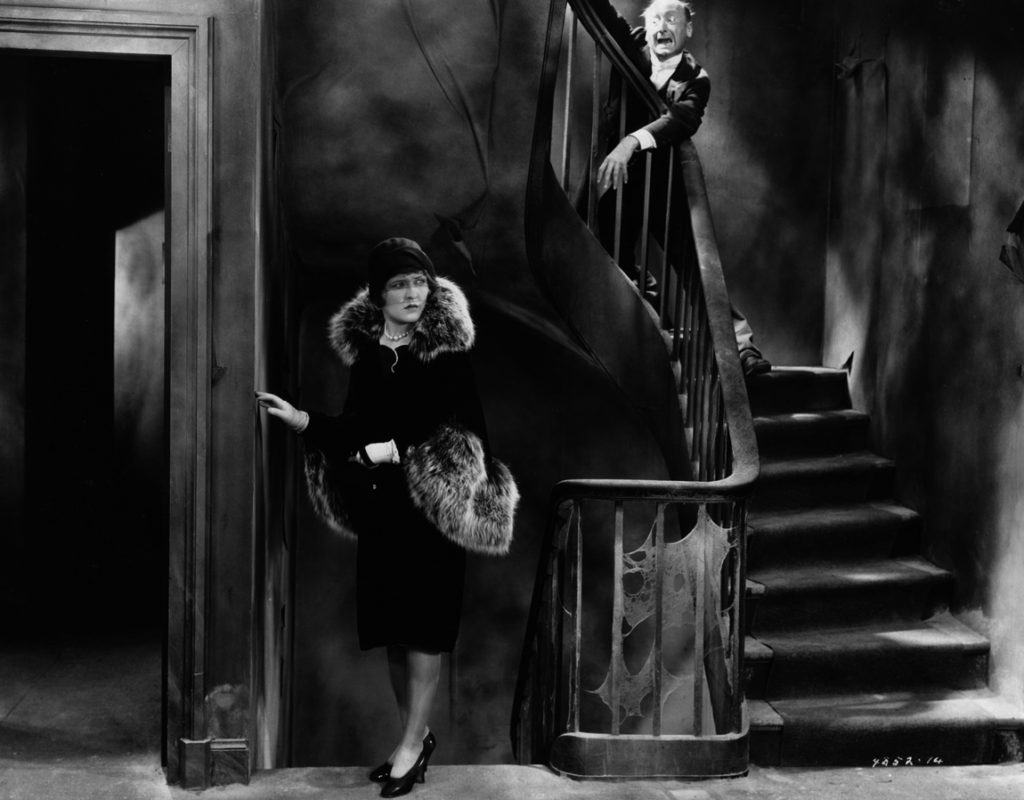 The plot hole which makes it most difficult for me to accept what is happening is probably rooted in the time in which I live: the era of the crime drama on television. **SPOILER ALERT; skip to the next paragraph if you want to view the film with a clean slate.** It is revealed in the film that Woodford is killed because of a live wire which was run to the candlestick positioned behind him during the show. There are, of course, several things wrong with this: first, the doctor who examines him should surely know what death by electrocution looks like; otherwise, I don’t want him to be in practice.

Second, Woodford’s character drops the candlestick which is unlikely given that the muscles would still be tight around the candlestick. All of that being said, I’ve found similar plot holes in films of the era: the 1926 production The Rat starring Ivor Novello and Mae Marsh treats the idea of ‘self-defense’ being a viable court-room argument for killing someone as a novel idea, and the 1929 film The Kiss, starring Greta Garbo, shares an equally large forensic evidence pothole. No matter; this film isn’t a crime textbook and my heightened awareness of forensics due to the nearly 90 years of scientific investigation can hardly make a case that this movie is inferior to the standards of the day. It does, however, make me wonder how many people were put away for crimes they couldn’t possibly have committed. 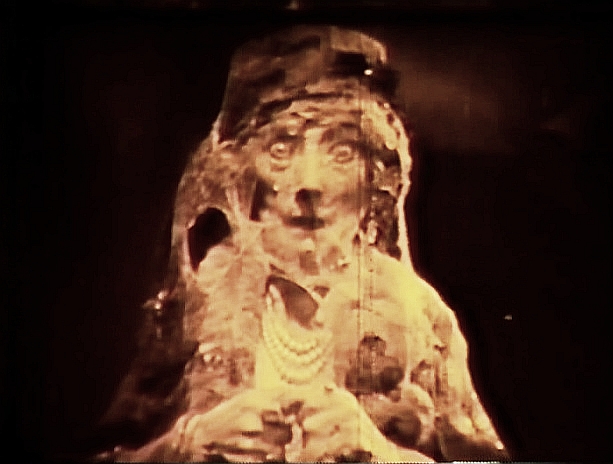 The visuals are well-conceived; any viewer familiar with The Cat and the Canary will recognize the same sort of wit in both the visual presentation and the title cards. The theater’s exterior looks like an ominous face looking onto the street below, the stylized sets give the audience the cues they need to engage with the story in the moment, and the shots are lit appropriately without being too dark or too bright. The auditorium itself is the famous Phantom of the Opera set, constructed by Universal for their super-gem production five years before. While the set is recognizable to fans of Phantom of the Opera, Leni does much more interesting things with the camera than Rupert Jullian ever did and makes the set truly his own.

The film print used by Grapevine seems to have at least two sources—presumably both 16mm. It appears to be a different source (at least in places) from the bootleg copy which has circulated for several years on YouTube or the Internet Archive. It is tinted orange and blue as the bootleg version is, but contains a dissolve in the beginning credits which the bootleg lacks. The picture quality is clear, though soft. Scratches do not usually distract from the action on the screen and it’s nice to see a home video version of this film finally come to market.

David Knudtson provides a responsive, appropriate theatre organ score. Hailing from Fargo, ND, Knudtson frequently accompanies silent films both in town and at Minnesota State University Moorhead. Having followed his work for a while, I was very impressed with this score and think it adds a great deal to the film.