Jarmusch Drives Driver in a Tale of the Poetic Everyday 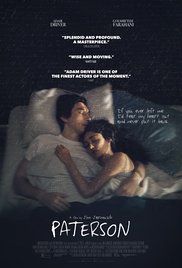 In a busy film awards season so chock full of splashy attention getters, unmined territory, and big emotions, it’s understandably easy for a quiet story of a blue collar bus driver/poet fall by the wayside. Like its introverted lead character, played to perfection by Adam Driver, Paterson never announces itself, and is never showy. Yet, it is something very special.

A beautiful paean to the unacknowledged inner lives of working stiffs, Paterson is a movie that lives to ponder duality. It ponders through the esoteric humor and restraint of an aged Jim Jarmusch, who’s finally managed to make a film less cool than it is tactile. His wry humor, ever ribbing his characters, is vital and constant, if also completely dry. Jarmusch, who rarely disappoints anyhow, is deeply in subtle mode, quietly firing on all cylinders.

As London film critic Mark Kermode so brilliantly put it, Adam Driver plays a driver named Paterson from Paterson in Paterson. His days run mechanically, a physical routine that wakes him up and propels him forward. Each morning he eats cereal from a glass, puts on his uniform, and carries his lunchbox to the bus depot.

It’s his commitment and affection for Laura that propels him to be the singular automaton amid an environment of brick, worn signage, and more brick.

He drives the bus through the workaday town observing people, hearing them talk, watching them come and go. At lunch, he sits where noted Paterson poet William Carlos Williams sat, facing the majestic Great Falls, notebook in hand. He gazes intently, as Driver’s subtle performance shows his process. There’s a mundane chain link fence between him and falls, but never mind that. The poetry he writes is seen and heard onscreen, just as Emily Dickinson’s is in A Quiet Passion. Fitting, since Paterson is a fan of hers; to which the interested party retorts, “Cool, a bus driver who likes Emily Dickinson!” 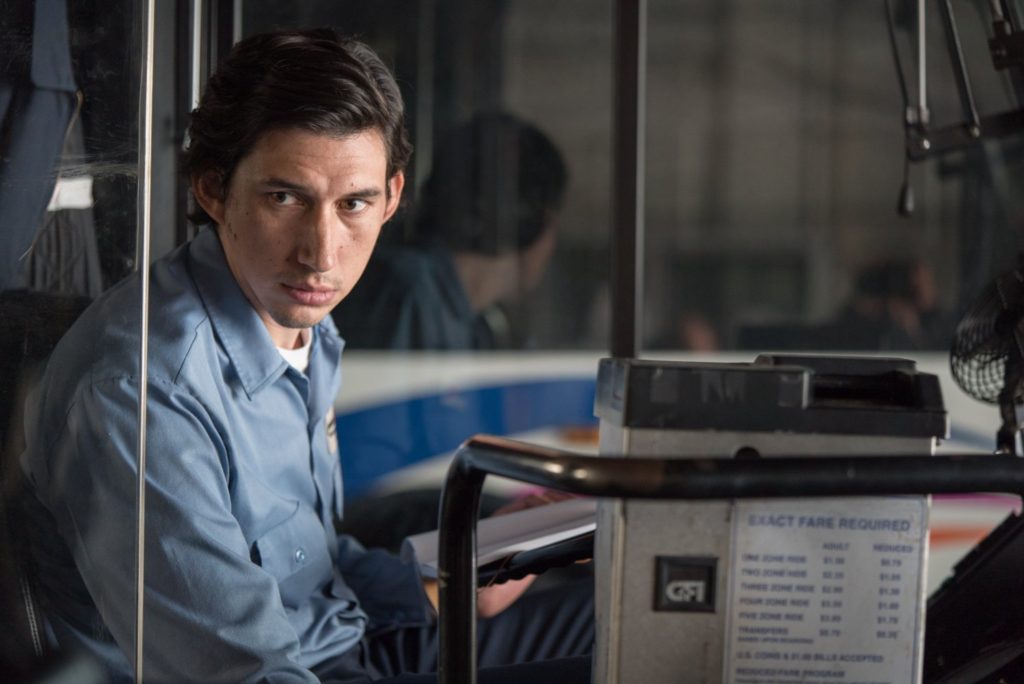 The real heart of Paterson, though, is his relationship with his wife, Laura (Golshifteh Farahani). Whiling away her days painting her shower curtains and fancying herself a country singer, she is a true housebound artist. Her commitments to her flighty dreams are Paterson’s burden to bear, but he really doesn’t seem to mind. She sees the beauty in his poetry and gives him his space, and his meals. Their love is something unblemished amid the tiring grind. His relationship with their dog, Marvin, on the other hand…

It’s his commitment and affection for Laura that propels him to be the singular automaton amid an environment of brick, worn signage, and more brick. He writes a love poem inspired by the box of Ohio Blue Tip matches he finds in their home. It is one of several such poems for her, even as she cooks weird meals, recklessly spends money they don’t have, and paints black and white circles throughout the house, ever expressing herself. 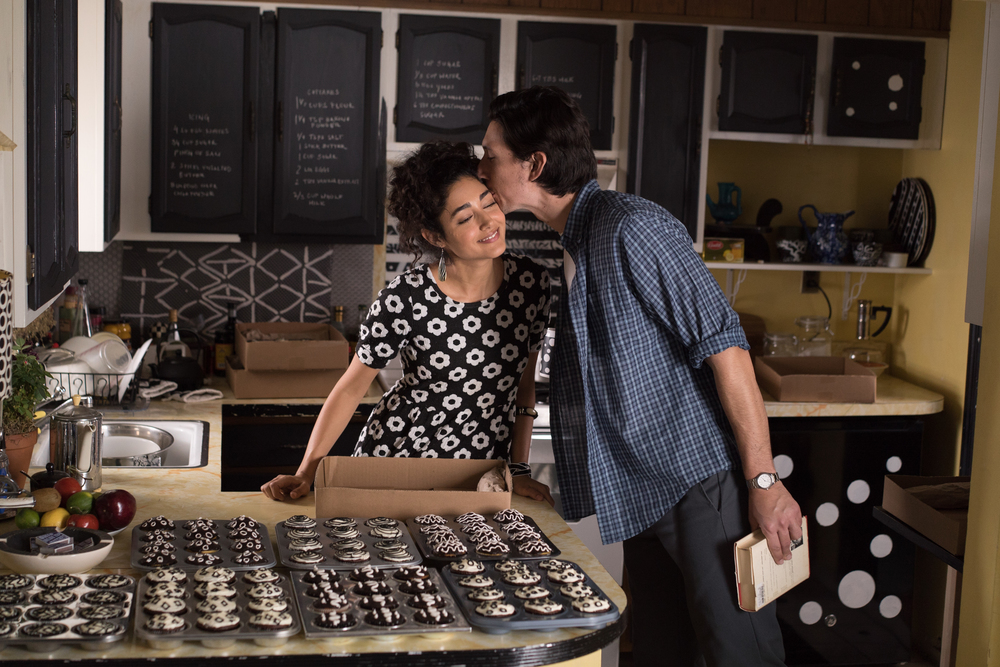 Jarmucsh’s quirky fascination with twins, previously evidenced in 2004’s Coffee & Cigarettes, is elevated here to a repeated chorus among Paterson‘s many verses. Again and again, Paterson notices twins going about their day, sometimes even discovering that someone he already knows has a twin, meeting both. It’s enough to make one wonder if Paterson, New Jersey is like Rochefort in France, known for twins. In any case, the motif speaks to the duality at the core of Paterson’s existence: the bus driver who’s also a poet. Jarmucsh seems to be implying that we all have “twin selves” within us, different versions of ourselves living to different purposes. It just so happens that real twins are an actualized version of the layered possibilities of such things. None of this is stated outright, or even presented for the sake of pondering. But it’s all there and interesting, and kind of funny, too.

Paterson is breezy and deceptively rewatchable in an enriching way, but always a tribute to the unseen double creative lives of those all around us. Just as the unassuming bus driver might secretly be the best poet in New Jersey at the moment, that road crew worker out your car window might be a thrilling avant-garde composer. The window washer might be an amazing dancer. The file clerk might be a brilliant novelist. The groundskeeper might be the finest film critic in town. Talent is hiding in plain sight, all around us.

Even in self-imposed sameness and perpetual motion, there can be satisfaction, love, and even creative beauty. Whether you take a bus home from seeing Paterson, walk, go another way, you just might see poetry happening around you. 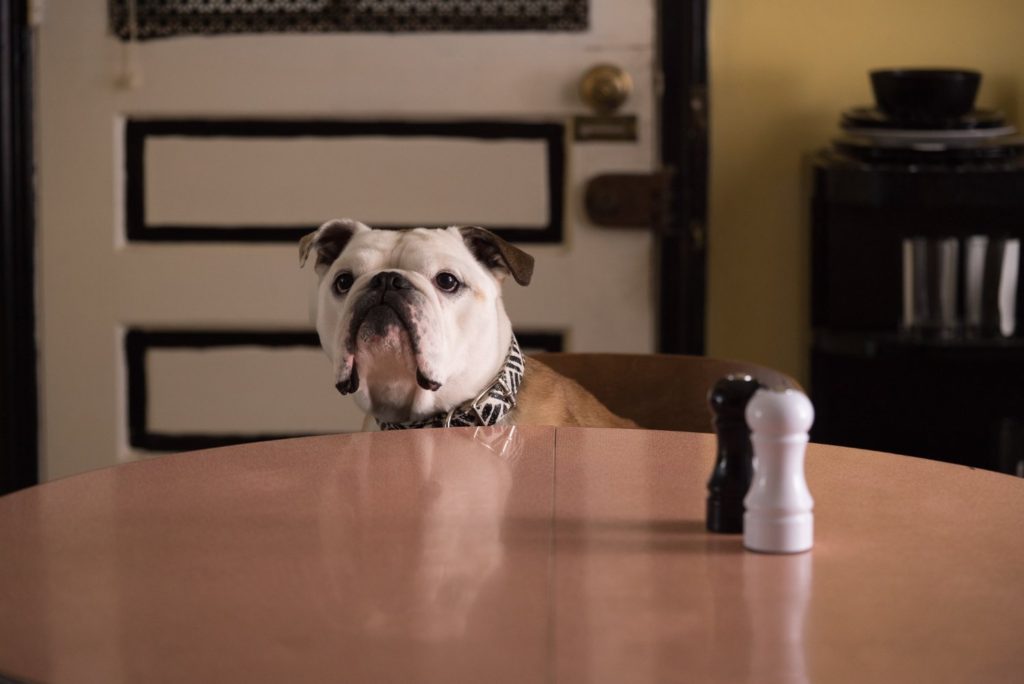