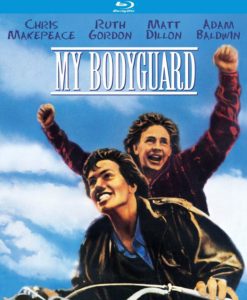 When you think ’80s teen movies set in Chicago, you think John Hughes, not Tony Bill. In some ways, Bill’s My Bodyguard sets the stage for Hughes, though Hughes, and you must admit this even if you’re a fan, takes that stage and heightens the reality beyond most recognition, still swaggering out some measure of truth, but at the expense of a lot of verbose, sometimes overly glib posturing. Bill’s film, written by Alan Ormsby, is a more sensitive film that correctly captures the feeling of being powerless against another human being, even one whose own size gives him no right to push anyone around. There are the to-be-trademarked Hughesian elements of class conflict played out on the smaller stage of a high school campus, the in-class confections of close-up shots of odd teenage faces looking on vacantly as a teacher drones on, and the staging of children’s coming of age set against the backdrop of Chicago landmarks, but it’s all done quietly, less showy, with the more relaxed pacing of a movie that’s clearly straddling the ’70s-’80s divide. 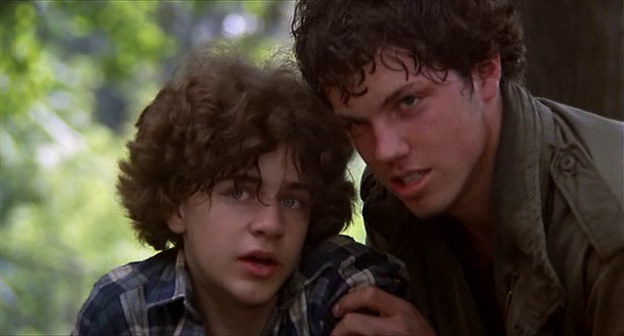 The “My” of the title is Clifford, played by Chris Makepeace – that ’80s oddity, who looks like a walking, talking baby doll with exploding chia hair. The previous year, Makepeace was the kid Bill Murray got to play all big-brotherish with in the broad, gross-out camp comedy Meatballs. In that movie, Makepeace clearly got nothing from director Ivan Reitman but “look sad, laugh at Mr. Murray.” He’s raw and awkward and frankly hard to watch. Here, shot while Meatballs was still in theaters (according to the director’s genial commentary track), he’s all that, but it’s channeled, and it’s surrounded by an actual story, not skit-level antics. Clifford lives in the hotel his dad runs and is new to the local public high school, where swirl tall tales of a murderous student, Linderman (Firefly‘s Adam Baldwin), who, so the story goes, killed a kid and is lurching back to school soon, so watch out! Linderman is nowhere inside the first 20 minutes, during which his legend is ballooned all out of proportion, Harry Lime-style, by the frightened student population. Indeed, in a movie that sets up Linderman so richly as a soulless killer of children, it’s telling that the kids are still as scared as they are of someone, Matt Dillon’s “Moody”, with such a comparatively toothless scheme as to simply steal their lunch money – the littlest extortionist, he plies his charm upward toward the faculty and his twisted insecurities downward to the less ego-endowed, with an especial fixation on the new kid who would dare to defy him. Dillon as Moody is all slick-backed hair and peacock smirking, but he’s a shrimp, too, and Clifford seems to sense that Moody may have all the bully cards on his side, but wouldn’t know a chess board if he got checked by one. 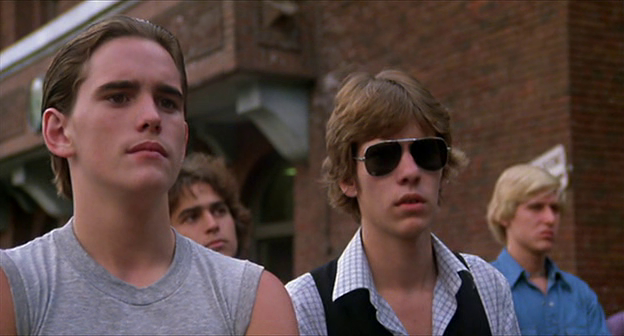 As kid empowerment, Clifford is the right balance of nerdy: he’s quiet, short, observant, and smart; and confident: he refuses to pay what Moody demands, and isn’t afraid to look him in the eye. The movie gets going when Clifford, marrying his brains to his chutzpa, talks Linderman into standing up to Moody on his behalf. Then, baiting Moody and his droogs into a nearby junkyard, Linderman scares the bullies off with nothing but the rumors that float around him, and then promptly disappears again into his self-imposed exile. The rest of the movie is Clifford wooing Linderman back, while learning something about himself – the primary mandate of a movie that plays out like it does. But there’s an odd message lurking around, Linderman-like, in the folds of the movie. Even as it’s showing us a kid resolved to never bend to forced authority – we cheer for Clifford when he keeps his giant marble eyes fixed on Moody’s soulless shark eyes, unafraid – we’re also left to wonder if the violence that’s used as the only thought-up alternative to paying up won’t just continually escalate after the rosy epilogue and end credits. Linderman spends the entire movie wrestling with the heavy consequences of gun violence in his own home, and seems to be moving toward some self-awareness on the subject of aggression, but instead passes on his brute mentality to the smaller Clifford by encouraging him to “aim for his nose.” It feels like a holdover from some quaint ’60s TV show episode about standing up to your bullies with fists, forsaking even the possibility that wits are on his side as well.

The engaging but fairly thin plot is filled out with vignettes of Clifford’s life at the hotel with his dad (Martin Mull) and his flighty, libidinous grandmother (the great Ruth Gordon). These scenes are mostly played for laughs that never come off – though Gordon’s scenes are at least sweetly charming – and the mirror plot, involving Mull’s seething second-in-command (Craig Richard Nelson) attempting to sabotage his way into Mull’s job, falls flat as story and as comedy. The adults all fit on a scale spanning dopey to ineffectual, another standard teen pic m.o. that Hughes took to gaudier heights later in the decade. Still, the movie escapes all that with a general vibe more akin to Breaking Away than Caddyshack, and by now is fittingly preserved in cultural amber as a kind of after school special writ slightly larger, and with a softer heart than its baked-in myth of redemptive violence would imply.