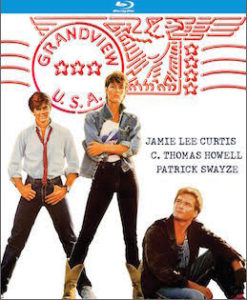 Aside from this new disc, don’t go looking for Grandview U.S.A. The place itself is standard, sunny small-town Americana; the kind of town that no longer thrives if it’s still there at all.

The film of the same name wants to be a star vehicle for Jamie Lee Curtis as she continues her crossover from teen screen queen to “legitimate” A-list roles – another ship that has since sailed. Tough-as-nails yet all kinds of sexy, Curtis gets all aspects the job done. That said, there’s plenty for her many costars to do, as the movie is, for all intents and purposes, an unlikely ensemble at heart.

Grandview U.S.A. is the kind of pre-PG-13 film that is not made anymore. It’s “it is-what-it-is cinema”, as self assured as a dodo bird, but in retrospect, kind of delightful. In 1984, no one knew that the PG-13 rating would, for better and/or worse, within one year, basically wipe out this brand of R-rated comedy/drama. One could see a movie like this skipping theaters entirely and going straight to drive-ins before settling in for edited-for-television runs on local broadcast stations, or uncensored presentations (oh, my!) on still-budding pay cable. It is true that if not for its frankly impressively stocked cast list, it’s colorful language and a touch of nudity here and there, Grandview U.S.A. could pass for a made for TV movie of the era.

There’s something amusingly incongruous about watching this film newly remastered on blu-ray. It’s almost too nice! To experience a movie like this looking and sounding so pristine flies in the face of how I’d expect to have first discovered it: As a beat up VHS tape in grocery store video rental, offering only pan and scan picture, and compressed, muffled sound. As the film begins on this new blu-ray disc, a very vintage, very 1980s CBS Films logo plays, looking and feeling like something right out of Stranger Things. 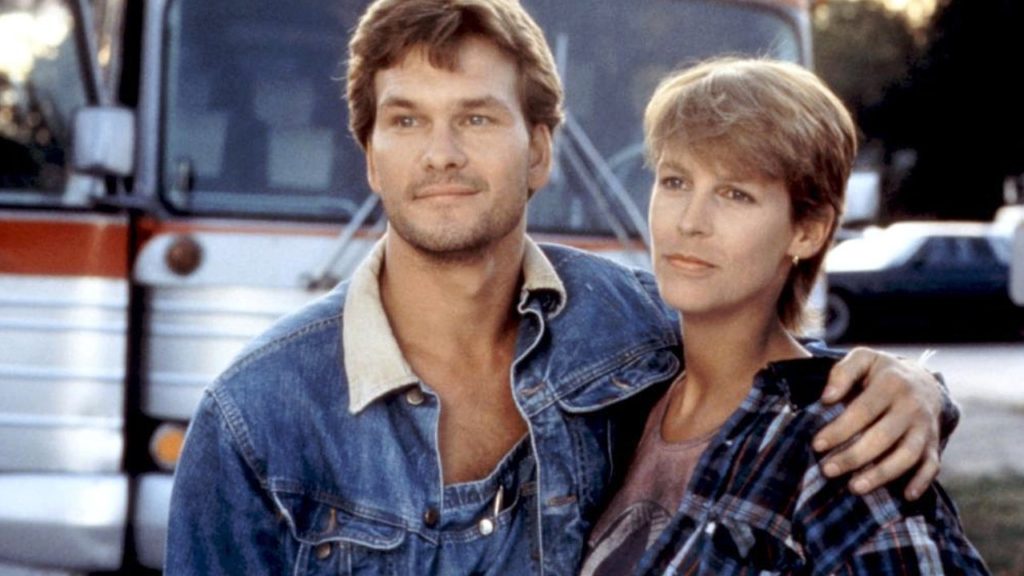 Swayze and Curtis in GRANDVIEW U.S.A.

Then the movie starts with a disposable hokey pop tune (“Take Me Home to Grandview U.S.A.” by Air Supply, to be exact) set to random moments of comical shenanigans (a guy accidentally driving his rider mower through a sprinkler, etc.) that are intended to be tone-establishing slice-of-life incidents, but are so obviously staged. Of the many, many such opening credits sequences exactly like this one that I’ve seen over the years, I can’t think of one to site specifically as a reference. There’ve been spoofs a’plenty, but this film isn’t tapping that collective memory – it’s a source of it.

Except, previous to this viewing, I had never heard of Grandview U.S.A. Which isn’t the craziest thing in the world, as I would’ve been too young to see it anyway when it premiered in 1984. Although by then, I was paying attention to movie listing in the local paper. Maybe I’d just forgotten it? Heck, I wouldn’t be surprised if most of the actors involved have forgotten it.

That’s not at all to say that Grandview U.S.A. is a poor film, per se. It is in fact a perfectly serviceable lighthearted small town/coming of age romp that makes for a satisfying watch at the end of a long day. (Or, as Dean Treadway might call it, a good “taco movie” – get some cheap tacos from a takeout place, and eat ’em while this plays). It doesn’t ask much of anyone involved or anyone watching it, but that’s okay. It’s all just… okay! 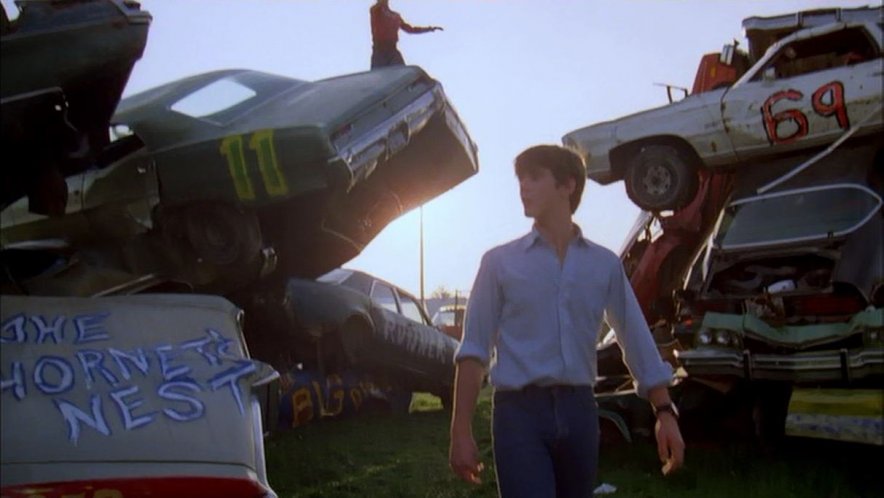 In case you’re not yet sold or unsold on Grandview U.S.A., this ought to be the clincher: Jamie Lee Curtis stars as the owner of the local demolition derby. Patrick Swayze, a few year pre-superstardom, is the ace driver Slam, the only character to occupy both of the film’s two, count ’em two, love triangles.

Yet Swayze as Slam must play second fiddle to C. Thomas Howell (The Outsiders), playing an ’80s everykid on the cusp of some vague notion adulthood. Howell’s character is the most bland, but also the one at the story’s Joseph Campbell-ian crossroads. Will he stay in town where he knows it’s safe and he can continue pursuing the discernibly older Curtis (Randal Kleiser, the director of Grease and The Blue Lagoon, knows as few things about warped teen romance) or will he leave to follow his crazy dreams?

Jennifer Jason Leigh has the thankless supporting role of Slam’s unfaithful wife, Candy. Despite ultimately suffering public sexual humiliation after carrying on an affair with the local washing machine salesman, Leigh still fares better in this movie than her other C. Thomas Howell co-starrer, The Hitcher. 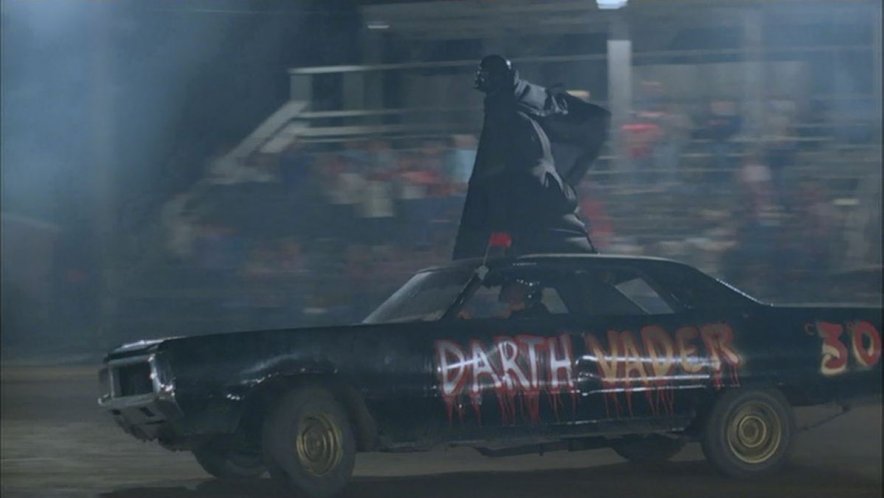 Even the Dark Lord of the Sith makes an appearance at the demolition derby!

Continuing the listing of recognizable names that occupy Grandview U.S.A., we find one-time teen heartthrob Troy Donahue, the venerable M. Emmet Walsh, and Police Academy‘s own Michael Winslow, all in small but colorful parts. And if you’re unsold on the movie’s 1980’s cred, young John and Joan Cusack turn up a handful of times in the background for no reason other than, that’s what they did back then.

Everything about the demolition derby aspect of the film is rare fun. The film not only embraces the D.I.Y. smash-’em-up spectacle of spray painted junkers colliding in the mud, but the entirety of the venue as a microcosm, a way of life. The town officials may not be thrilled about the proliferation of rowdy low culture and the crowd the demolition derby attracts, as they even plot to shut Curtis and her coworkers down. But by the end, it’s clear that the place means something, and not in a hokey way. 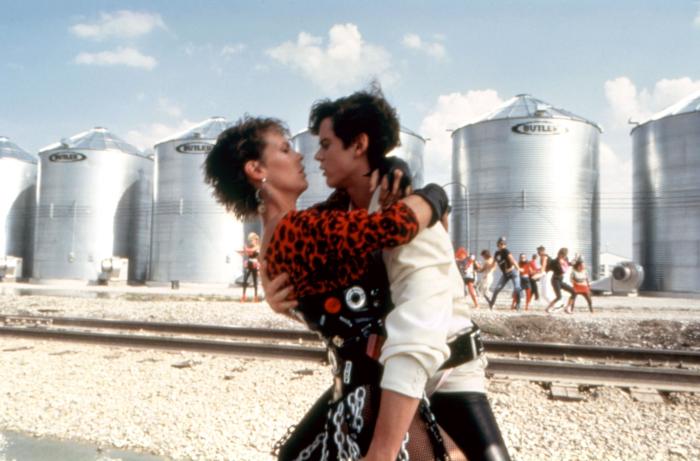 But as good as that is, it’s the gloriously dated music video fantasy sequences that are so spot-on, so perfectly representative of the then-entrenched Music Television, that it’s impossible to know whether it’s pure spoof or the film’s misguided attempt at cool. Looking at these sequences with 2016 eyes, the effect is almost the very same as watching the music video sequences of John Carney’s recent early-’80s-set Sing Street. It would not be surprising to learn that Carney looked to Grandview U.S.A. to stylistically inform his touching autobiographical Irish coming of age crowdpleaser.

As far as blu-ray bonus features go, there’s a whole lot of nothin’, outside of the film’s trailer. But then again, the mere fact that this movie is now on blu-ray in the first place, and looking and sounding like 1984 all over again, is plenty noteworthy. So wrangle up some tacos, tease your hair, and take the trip to Grandview U.S.A., the kind of place that’s since fallen off the map in more ways than one.