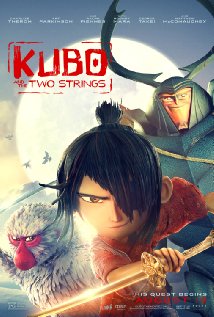 In ancient Japan, strange things are afoot. Magic, both good and bad, are coming to a head as a particularly animated supernatural dysfunctional family prepare for their grand showdown. Of course, “good” and “bad” are in the eye of the beholder. Or in this case, the eye of a young boy named Kubo.

Each day, Kubo ventures into the village to earn money by telling fantastical stories. His enchanted origami and pulsing strumming of his shamisen (his long-necked Japanese stringed instrument) draw the crowd, but its his engaging, edge-of-the-seat orating that’s holds them there. The instrument, like him, is humble, imperfect, and evoked in the film’s title. Except, most of the time, it has three strings. Or just one. The mystery of the exact nature of the title is one of Kubo and the Two Strings‘ most engaging aspects.

In the trailer for this film, Kubo tells us, “I use magic to tell stories, about epic battles, warriors and monsters. But I had no idea my stories were actually true.”

From this quote, one can derive the vindicating wonder of the successful stop-motion animators who’ve not only been making a living telling the kind of far-out tales they loved as kids, but finding the personal (the “true”) side othe stories they tell. No matter who you are, sometimes it can sneak up on you.

The animation is grand and detailed; breathtaking in every way.

In this latest adventure tale from the glorious misfits at Laika animation studios (the outfit that brought us Coraline, ParaNorman and Boxtrolls), their usual macabre eeriness takes a back seat to good old fashioned quest adventure. The animation is grand and detailed; breathtaking in every way. It’s not uncommon to forget that Kubo (voiced by Art Parkinson), his protector, Monkey (Charlize Theron) and the lunky but good natured samurai, Beetle (Matthew McConaughey) are actually plasticine and armatures as opposed to real living beings. 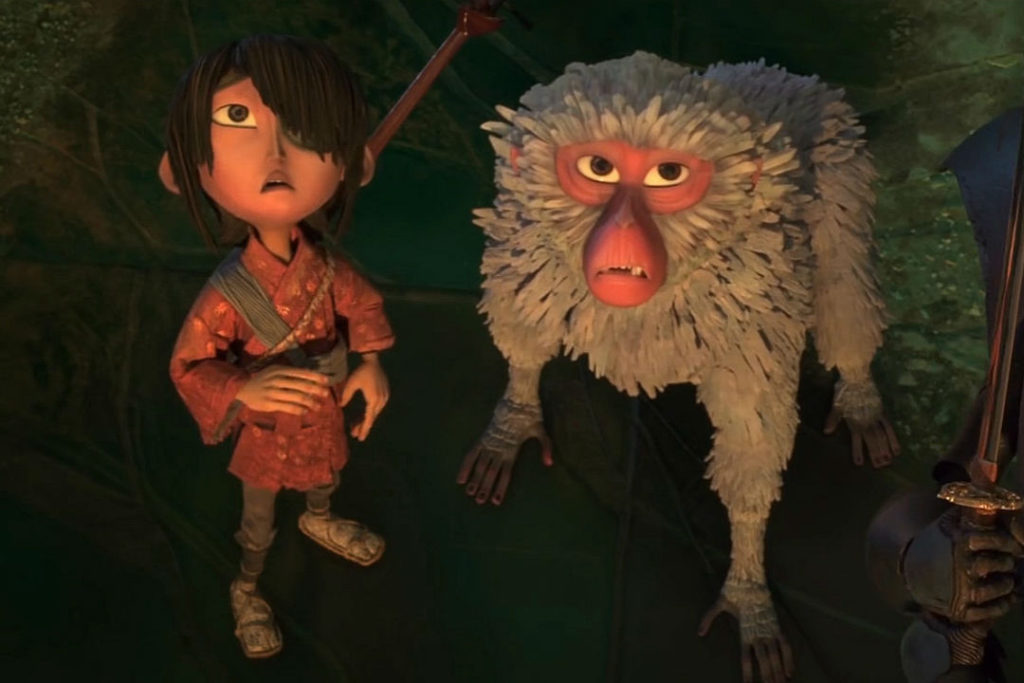 Kubo himself is an unassuming young boy, his primary feature being an unfortunate one: his left eye is missing. Taken, to be precise. By his evil grandfather, back when he was too young to recall the incident.

His mother, obsessed with his safety and partially catatonic with grief, has a Sarah Conner-esque complex when it comes to his upbringing. She regularly says things like, “Kubo you must listen to me -! If you stay out passed dark, your grandfather will find you, and he will take your other eye!” It’s true, he will take his other eye.

Per his training, one day, Kubo will confront and kill his grandfather. In order to do this, he must acquire three magical items: A sword, an armored breastplate, and a helmet. All glow with golden power, and all require a life-endangering trek to obtain. Giant monstrous skeletons and disembodied floating eyeballs await.

Running point for the evil eye-obsessed grandfather are Kubo’s aunts, a pair of wonderfully eerie identical sisters who float a few inches off the ground, wear scary porcelain masks, and speak in tandem with the voice of Rooney Mara. Travis Knight, the CEO of Laika who is making his directorial debut, stays true to his studio’s reputation and doesn’t dial back on the creepy. This is to their great credit in the case of this fantastical, mythical tale. Classic Kaidan meets Clash of the Titans.

Amid it all, it must be said that pacing does become an issue. Following an energizing opening half hour, the film seems to slow down, shifting into some invisible lesser gear throughout the middle. With the finale, it picks back up. All the while, it never stops looking astonishing. Its too bad the tempo doesn’t consistently match the visual vibrancy.

Besides the two strings of the title which are strung onto Kubo’s shamisen, it could be said that there’s another pair of strings being played behind the scenes. These strings aren’t so much on the left and right of one another so much as opposing on the East and West. The filmmakers – not the character in the film – play these strings quite differently from one another. I’m referring to the discordant tones of Kubo and the Two Strings: Its highly effective traditional Japanese legend quality, and its all too contemporary injection of contemporary Westernized humor.

Frankly, it’s frustrating and disappointing to see what could have been a timeless masterpiece compromised in this manner.

Snarky comebacks, witty zingers, and 2016 attitude cut into the carefully cultivated sense of sometimes tragic myth, time and place that’s been so effectively evoked. Its as though the filmmakers got cold feet in terms of how a straight ancient Japanese adventure would play to kids in the western world, so they threw in anachronistic verbal humor wherever possible. It’s not a fatal move, but it most definitely lessens the film. Frankly, it’s frustrating and disappointing to see what could have been a timeless masterpiece compromised in this manner. 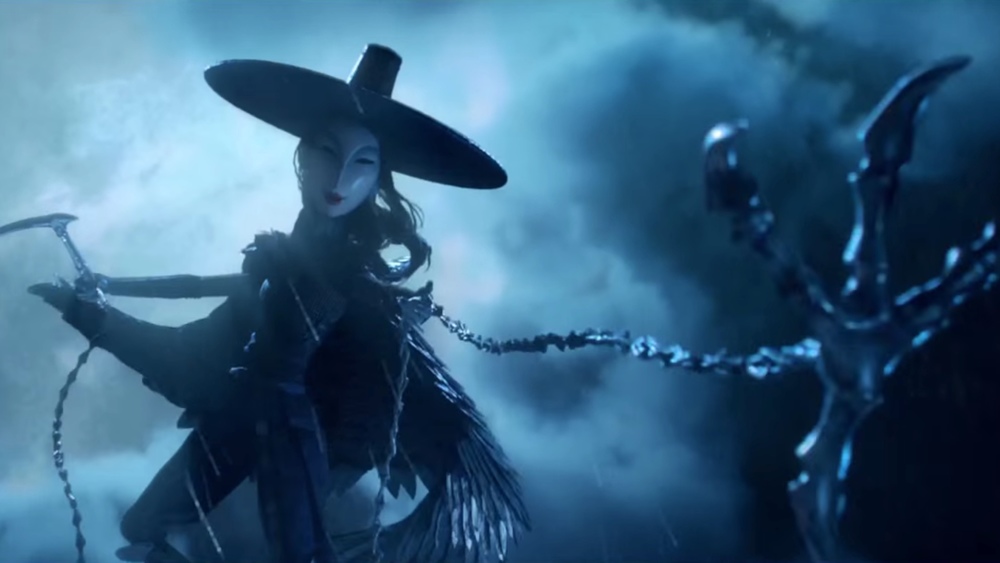 Getting back to Kubo’s trailer quote, the “truth” in the outcome of his adventure may or may not end up highly questionable depending upon one’s notions of nature versus nurturing when it comes to one’s true self. Nevertheless, the challenges faced along the way and the unyielding devotion Kubo’s guardians are qualities to be admired.

Young children and kids sensitive to violence and scary monsters will want to sit this one out. The film was screened for critics in 3D, but the process does little to enhance what is already a visual marvel.