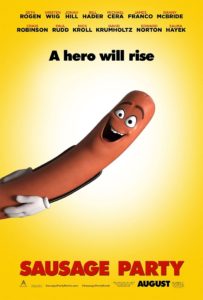 About ten minutes into Sausage Party I began to ask myself some hard questions: Why am I here? What is my purpose? How is it that my life has led to my being in this theater, on this night, watching this movie? At the end of my life as I reflect on my regrets, how high will this movie rank on the list?

Sausage Party is an animated film built around the conceit that our food is alive and sentient, full of hopes and dreams about which we humans know nothing. It’s the same “what if” that was applied to toys in the Toy Story trilogy, and more recently to domesticated animals in The Secret Life of Pets. But Sausage Party is not a family film. Let me say that again: SAUSAGE PARTY IS NOT A FAMILY FILM. Instead, its story is a product of the (one speculates) cannabis soaked brains of Seth Rogen and his writing partner Evan Goldberg, along with Kyle Hunter and Ariel Shaffir; and the film is co-directed by animation veterans Greg Tiernan and Conrad Vernon. Sausage Party is the tale of a hot dog, Frank (Seth Rogen) in search of the truth about what really lies beyond the supermarket doors, while his girlfriend, Brenda (a hot dog bun voiced by Kristen Wiig) is simply trying to get back to her aisle and back in her packaging.  They are also both in search of the moment when they can finally have sex, i.e., bring hot dog and bun together as the gods (humans) intended.

Sausage Party touches on the big, timeless questions of doubt and belief. Why do we accept as fact things which we can’t prove? Is religion really just the opiate of the groceries? How can we communicate respectfully across ideological lines? 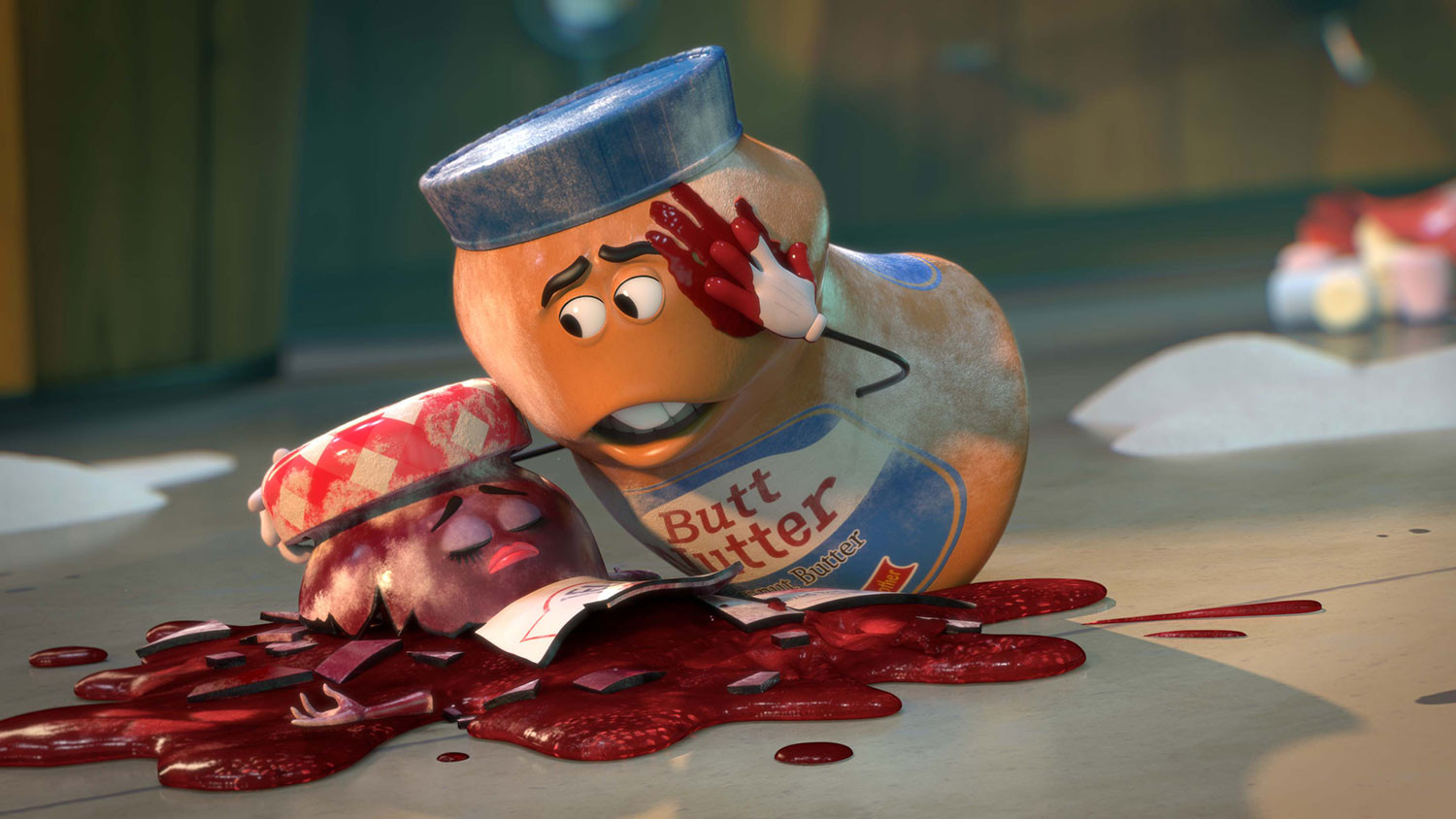 I say that Sausage Party touches on those questions, and it does. But don’t get the wrong idea. Sausage Party’s position on religion is mostly just mocking, and the movie is far more interested in sex, profanity, and cheap stereotypes than any  honest examination of spirituality. This is a movie that delights in being transgressive and dares you to react negatively. Still, at risk of being seen as a pearl-clutching, politically correct wet blanket , I must tell you that I reacted very, very negatively to Sausage Party.

The animation is adequate but charmless.  The human characters are rendered intentionally ugly, and the other characters have a slapdash design that made me wistful for those other animated movies about food – Cloudy With a Chance of Meatballs and its sequel.  Sausage Party is overflowing with comedic talents (not just Rogen and Wiig, but a cast including Paul Rudd, Bill Hader, Edward Norton, Salma Hayek, Danny McBride, Craig Robinson, Jonah Hill, James Franco, Michael Cera, and David Krumholtz). Every once in a while the jokes land (an early scene of a shopping cart disaster and its aftermath, for instance) but on the whole, Sausage Party is a repugnant movie. It’s a nasty, mindless, shameless, and shameful piece of junk. It grieves me that $19 million went into the making of this film when so many worthy little movies struggle to be made at all. But you know what? Sausage Party would be a waste of money if its budget was $1.9 million, instead of ten times that amount. Sausage Party is not even worth price of the small bag of popcorn I tried to choke down as I watched it. It is a terrible movie.

“Why?” you may ask, “How can it be that bad? What were you expecting?”  I suppose I was expecting something closer to Rogen and Goldberg’s 2013 film This is the End.  Look at the overlap in the cast and crew, and you may understand why. This is the End was very much an R-rated comedy with the raunchy jokes and profanity that implies these days. But it was also clever – not always, but often enough. Its take down of celebrity status and deflation of bro-culture; it’s genuinely funny depiction of irreligious people trying to get a grip on the in-breaking of the apocalypse – those signs of higher brain functions kept This is the End from sinking into a swamp of jokes about masturbation and getting high.

There is no such help or hope for Sausage Party. God knows this movie could use an apocalypse, but all we are given is a steady stream of profanities, deeply offensive stereotypes, and increasingly graphic sex jokes.   Just how stupid is this movie? The villain is a douche.  I’m not using slang, I mean that literally. The Big Bad of Sausage Party is Douche (Nick Kroll), and he is literally a douche. This also points out the lack of internal logic in this movie. The characters are mostly foods, but they’re not all food. They are surrounded by inanimate objects, but some inanimate objects are animated. Hence, we get a very macho, jacked-up, evil douche. Later in the movie there is a cameo performance by a used condom. Yes, I sat and watched the screen as a used condom talked. It wasn’t just a low point in the movie; it was a low point in my life. 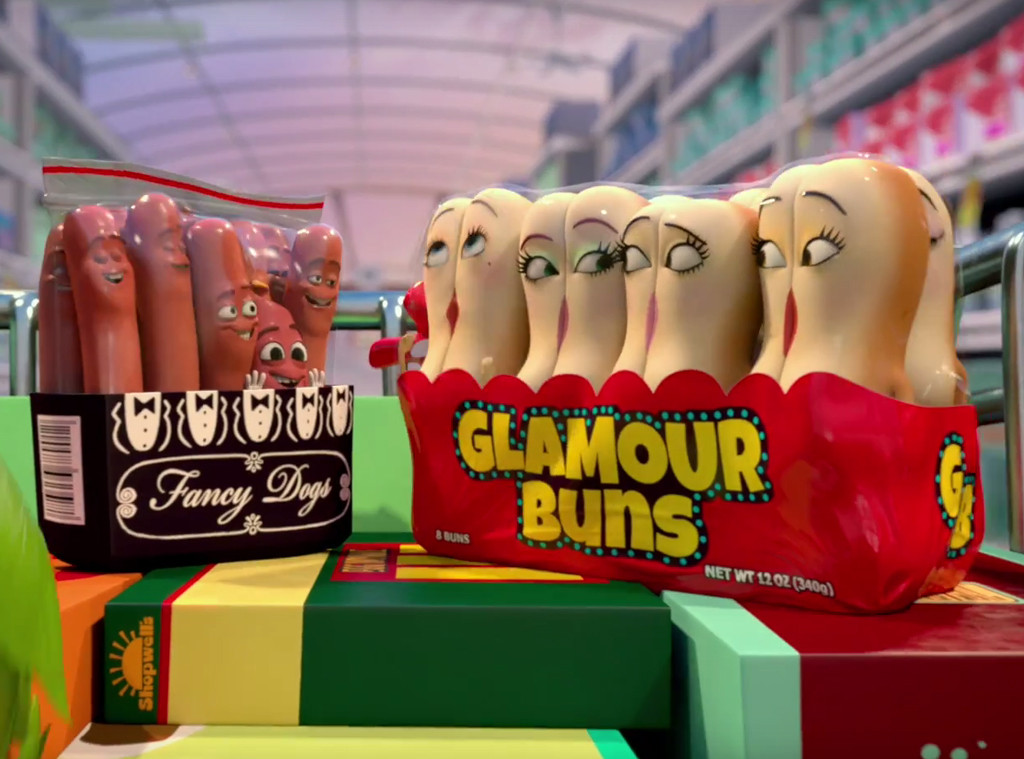 There is a long tradition of transgressive comedy, but it’s best when it’s “swinging upward” – when it’s used to mock the powerful, or when the marginalized defang bigotry through self-mockery.  But “Sausage Party” is no 70s era John Waters film.  It’s a story created by two rich, white, straight, male celebrities, trafficking in the laziest slurs and stereotypes.

A word about the profanity, a subject I have discussed in other reviews. Generally speaking, I care little about profanity onscreen. There are some great movies with an abundance of swearing (The Big Lebowski comes to mind), and some great movies that avoid it entirely. I do not get worked up easily over “naughty” words. There are, however, two groups of people that I think make far too much of profanity – people who count the swears and evaluate a movie’s merit by such thoughtless, clinical analysis; and at the other extreme,  those who think that saying lots of swear words is automatically hilarious. The latter are like kindergartners who can’t get over how funny they think the word “poop” is. I knew we were in trouble with Sausage Party when the first real word of dialogue was a profanity, and then the third or fourth word, and then it was like being stuck in front a profanity fire hose for the rest of the movie. I think we can give up on Rogen and Goldberg maturing out of this phase, but do the rest of us have to sit in the sandbox and endure them?

As for the stereotypes, they are many, and they are awful. The movie mocks Blacks, Whites, Jews, Muslims, Native Americans, Hispanics, Gays, and sexual assault victims – and I’ve probably already blocked some  other episodes from my memory. The black character is a box of grits raging against “crackers” (who are, of course, actual crackers). “Fire Water” (Bill Hader) is a Native American who smokes a pipe (or a kazoo, to be exact) and spouts dubious spiritual insights. The Twinkie is named Twink (slang for a young gay man), the fruits are all “fruits” – it should be obvious by this point that the humor is a not subtle or elusive.  There is a long tradition of transgressive comedy, but it’s best when it’s “swinging upward” – when it’s used to mock the powerful, or when the marginalized defang bigotry through self-mockery.  But Sausage Party is no 70s era John Waters film.  It’s a story created by two rich, white, straight, male celebrities, trafficking in the laziest slurs and stereotypes. 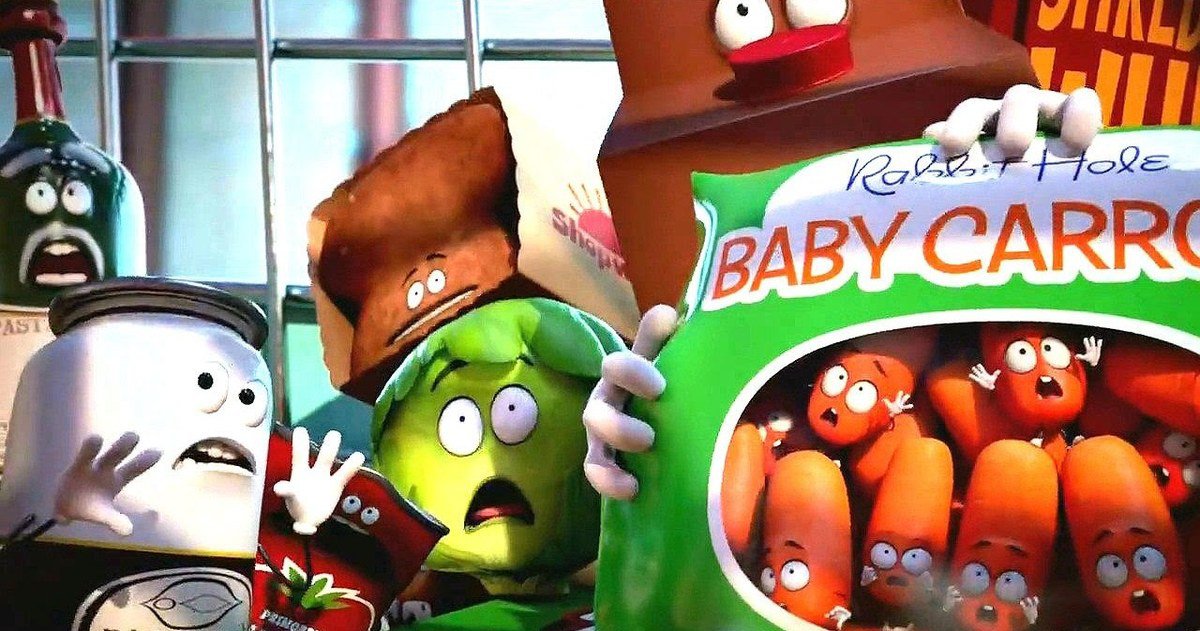 The sexual assault “comedy” is a repeat offense for Rogen and Goldberg: one of the scenes in This is the End involved Tatum Channing  having being raped. Here, in Sausage Party, there are at least two cases of sexual assault played for laughs. I am saying this as simply and clearly as I can: rape isn’t funny. People who turn sexual assault into a joke may not be bad people, but they’re doing a bad thing, and they need to stop it.

And then there’s the way Sausage Party handles sex. The movie is called Sausage Party: I expected that it would be crude. But this was so much worse than I was expecting – not just more graphic but more aggressively stupid – that I was in shock watching it. It’s surreal and ironic that this is the first time in reviewing for Zeke Film that I’ve felt dirtied by a movie’s sexual content, and it involved animated food. The next to last scene of Sausage Party is an orgy and it is just….gross. By that point, I was pleading with the movie to be over. When I write about movies I try my level best to watch them from beginning to end, but I have never been so tempted to walk out on a movie as I was with Sausage Party.

Sausage Party is so bad that I am tempted to give up watching movies entirely, lest I accidentally watch another one as bad as this.

Sausage Party is so bad that it may have single handedly cured me of my decades-long celebrity crush on Paul Rudd.

Sausage Party is so bad that my guest at the screening turned to me after it was over and said, “I’m not telling anyone that I saw this.” I don’t blame him. It’s certainly nothing to be proud of, for either of us. 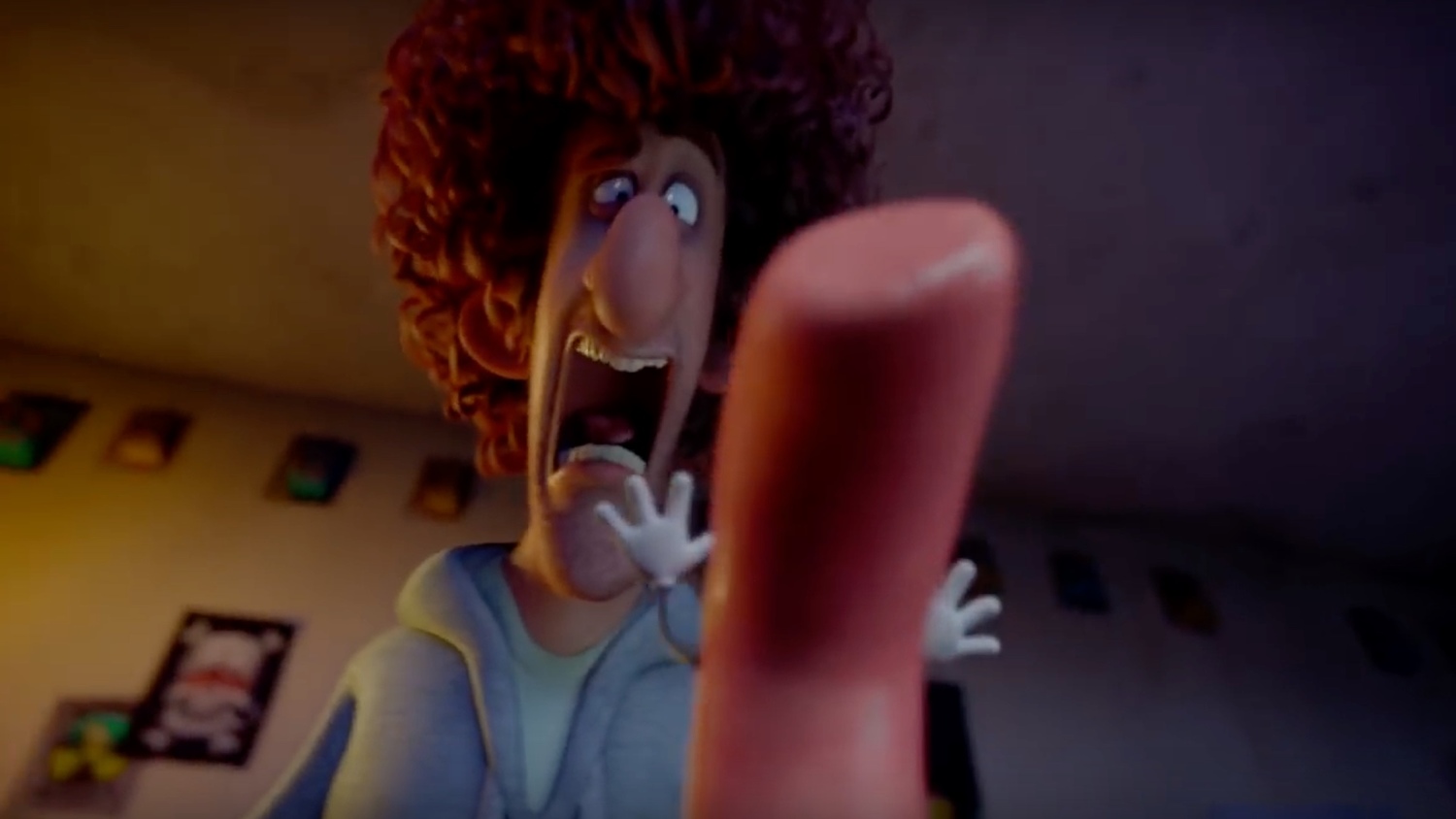 So what do I make of the fact that many people in the theater were screaming with laughter throughout Sausage Party? Frankly, it worries me. Perhaps this is the movie we deserve right now. We’ve been told for ages that it’s actually hilarious to make fun of ethnic and religious minorities, that there’s no harm in mocking the disabled, that women are too sensitive to rape culture, that the only people who get offended are losers who can’t take a joke. That’s the world we live in, and so jokes that range from the mind numbingly stupid (Meatloaf is a meatloaf – get it?) to porn-grotesquerie (like an endless line about ejaculate being sprayed in someone’s face) somehow strike many of us as just the sorts of things that should make us laugh.

Maybe I’m just the wrong audience for this movie. Maybe I’m too old or too set in my ways to “get it”. Or maybe we’re just buying garbage because it’s being sold to us by names we know, and we think if it’s outrageous it must be funny, and we’ve lost our palette for real humor – even for real blue humor.

I thought most of us were better than this, but if Sausage Party succeeds at the box office, I’ll know I was wrong.