Will The True Story Of The Coast Guard’s Most Daring Rescue Help To Rescue The Box Office? 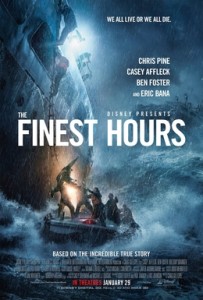 Disney, apart from their animated offerings, seems to thrive when it offers stories that inspire, provide hope, and cause the audience to leave the theater feeling better about the world than when they went in.  You can certainly see that recent offerings like McFarland U.S.A., or older works like Remember the Titans.

This year, occupying roughly the same release time as McFarland U.S.A. a year ago, The Finest Hours tells another “true” story meant to inspire.  The story follows the 1952 rescue of sailors from one of two oil tankers that have been split apart by strong winter storms sporting near hurricane force winds, and the subsequent waves that are tossing these ships back and forth.

The film sports a strong cast led by Chris Pine (Star Trek Into Darkness, Into the Woods) who plays coast guard rule follower Bernie Webber.  Bernie is a different role for Pine who typically has made an impact playing cocky characters who push the boundaries of convention.  This is no more true than in his portrayal as Capt. James T. Kirk in J.J. Abrams’ reboot of Star Trek.  He also showed this side of himself in his arrogant portrayal as Cinderella’s prince in Into the Woods, or his character of Rex Hanson in Horrible Bosses 2.  Here, Pine plays quite the opposite.  Bernie is a quiet, and subdued man who is so overly concerned with protocol and regulation, even to the detriment of his own private life as he seeks to date, and ultimately marry Miriam (Holliday Grainger).  His sense of responsibility to secure permission from his commanding officer to get married on a certain date, keeps him from fully committing to Miriam with the usual wholehearted excitement that normally accompanies the decision of marriage.

Bernie’s commanding officer is Daniel Cluff, played by Eric Bana (Star Trek, Deliver Us from Evil).  There is something of a quiet rivalry between the two men.  Bernie, while subdued, is obviously a talented officer who has a real knowledge of the area, the water, and the geography.  Cluff is not.  There is a lot of evidence that he doesn’t fully understand his role and is out of his depth in this position, especially as one of the worst storms bears down on the New England area where they are stationed.  Bana and Pine squared off before in Star Trek, but here, their conflict is much more passive aggressive. Ultimately, Cluff will send Bernie out with a small team to try to rescue the broken tanker against overwhelming odds.

Meanwhile, back on the broken taken, a small team of 33 men look to Ray Sybert (Casey Affleck), the ship’s engine man to help them survive after 1/2 the ship splits off and sinks leaving them afloat simply because of the air in the oil tank bladder.  At first, the men seek to climb aboard the life boats to make their way to shore.  Sybert takes that option away from them, causing them to dislike him even more than they apparently do.  But his knowledge of the ship, and his plan for steering the ship despite having lost the 1/2 of the ship with the rudder and steering controls forces the men to work with him for their own mutual survival.

To Disney’s credit, this film tries to play things straight by keeping the routine portions of the story like Bernie and Miriam’s relationship, or the office-based interactions between Bernie and Daniel Cluff just that….routine.

There isn’t really any dramatic overstatements or build-ups in these scenes, so they feel like real relationships and are thus more relatable and empathetic for the audience.  But this is a Disney film, and so in the more dramatic scenes involving the dire situation on the ship, or the attempt of the Coast Guard to reach the ship against some formidable obstacles, you will sense a sort of Disney-schmaltz seeping into the action.  While Denzel Washington was able to keep that at bay in Remember the Titans, and Kevin Costner was able to do the same in McFarland U.S.A., Chris Pine, playing Bernie as such a subdued character, sort of gets swallowed up a bit by this.

This does not mean that it will not play well to a January/February audience who are longing for something better at the box office in the doldrums before the Oscars and the launching of the early summer action films in March.  It will play fine, and most who see this film will appreciate seeing a film that affirms the virtues espoused in the story like bravery, courage, and determination.  Disney knows this and delivers exactly this, causing The Finest Hours to fall into the typical Disney wheelhouse of inspiring true stories that cause us to feel better about life and not much more.  This will be a fine addition to the Disney catalogue, and is a tribute to the brave people who actually went through this horrific ordeal, but not the finest film Disney has put out in its goal to inspire. So while it is not a sinking ship, it won’t be the rescue that the box office needs.