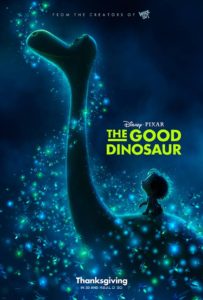 One can scarcely fault the latest Pixar film for merely being good and not great. After all, it’s right there in the title.

The Good Dinosaur is the celebrated animation studio’s 16th feature length film, and, following this past summer’s Inside Out, marks the first time it’s ever released two in one caledar year. (More than making up for having sat out 2014 altogether).

In light of the studio’s towering achievements with the Toy Story series, The Incredibles, Up, and others, it’s entirely understandable that we’ve come to expect greatness. The Good Dinosaur, however, despite telling a perfectly likable tale and boasting some of Pixar’s most stunning rendering to date (The water! The leaves! And other natural elements that appear freakishly photo-realistic!) does not measure up to that bar.

Rather, it’s right at home amid the other above-average-at-best entries, such as Ratatouille and Brave. Seeing how all three of these films are said to be “troubled” Pixar productions, plagued with story problems and filmmaker replacements, its any wonder they’re as good as they truly are.

The film amounts to a good if derivative entertainment, with a little something to say about our fears, and how to manage them.

Young Raymond Ochoa voices Arlo, the gangly, awkward youngest of three brachiosaurus siblings. The film’s premise, detailing how the world might’ve been different if the asteroid that wiped out the dinosaurs never impacted, allows for Arlo’s family to be traditional farmers, working the land just as humans would, but with the restricted physicality of the similarly anthropomorphized characters in Cars. They plow, they lay seed, and Poppa (Jeffrey Wright) lectures them all on the virtures of leaving their mark on the world. (Here, an actual mud-mark, left on a silo structure.) 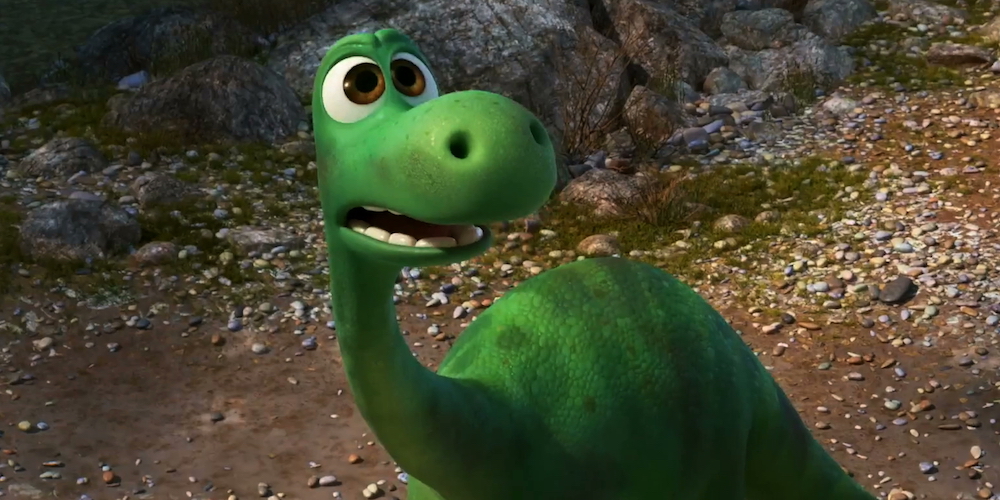 One day, early in the film, when Arlo and Poppa are out for a father-son stroll, tragedy strikes, and Poppa is swept away… and killed. Arlo ends up removed from his family with no idea how to get back. He meets an array of colorful characters in his travels (some voiced by Steve Zahn, Anna Paquin, and Sam Elliott), though, most notably, a young primitive human boy called Spot (Jack Bright). On this version of Earth, humans behave like dogs while the dinosaurs are more evolved. As far as a timeline goes, we’re simply told that this story takes place several million years after the asteroid missed the planet.

Upon overcoming his own internalized inadiquacies and fears, Arlo finds direct inspiration from his father’s spirit, and then takes on the long, scary trip back to his family’s home. If all of this sounds vaguely familiar, it might be because much of The Good Dinosaur is like a version of The Lion King where nothing happens. For those who’ve seen a lot of films, many of the tropes that hold this movie together feel a bit prehistoric. But not necessarily in a bad way! Arlo is a pleasant and relatable character, worthy of our time and empathy. Spot is a lot of fun, sure to make a mark of his own with younger audiences.  The film amounts to a good if derivative entertainment, with a little something to say about our fears, and how to manage them.  (One aspect that I could’ve done without: The Lord of the Rings sound-alike musical score. Very distracting.)

The fact, though, that Inside Out is as terrific as it is does Dinosaur few favors. If the former film has been drawing accusations from the general populace of “not being a kid’s film”, then it’s fair to level the opposite criticism at the latter. Pixar, at its best, serves up brilliantly crafted stories that impact children and adults alike. The Good Dinosaur, a meandering (if pleasant) affair to begin with, loses points for populating the film with a series of overly-voiced, borderline manic characters; the kind annoyingly typical of the more shamelessly kid-baiting computer-animated works hailing from DreamWorks and Blue Sky. That Pixar felt the need to interject a gaggle of shouty, attitude-riddenpteranodons only speaks to the level of desperation that this project was apparently creatively wrought with. And while there’s nothing wrong with studios making films especially for kid audiences, that specific audience deserves as much dignity in their movies as any other. The Good Dinosaur is not ruined as these elements intrude on its otherwise fine story, but there is nonetheless a whiff of disappointment.

I get annoyed when I hear a truly spectacular film like The Incredibles dismissed as a children’s film. This has everything to do with the fact that, despite the there being more mature established fare as The Simpsons, animation has long ago come to be seen as an exclusively kid-centric medium, something Pixar itself has opted not to buck, allowing all-audiences inroads to all their films. (Even Inside Out). The Good Dinosaur, moreso than any other, will stand as the Pixar film least appealling to adult tastes. Stomping its way into the hearts of children, however, ought to prove a much easier journey.