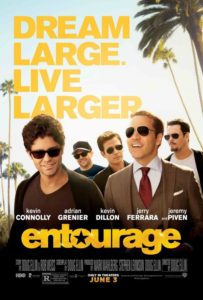 For 8 seasons, Entourage occupied a space on HBO that depicted the lives of 4 friends who leave New York for a shot at stardom in Los Angeles. Vince (Adrian Grenier), his half brother Johnny (Kevin Dillon) who everyone calls Drama, Turtle (Jerry Ferrara), and Eric (Kevin Connolly) are still in Los Angeles living the life 7 months after where the show left off. Also back is their agent-extrodanaire turned studio head, Ari Gold, played by the always competent Jeremy Piven.

The film itself is one giant over-stuffed episode of the TV show which follows Ari handing the keys of the studio he just took over to Vince who has been tapped to direct his first feature film.  Vince is over-budget on the film and needs more cash to finish it, but hasn’t shown anyone at the studio a single frame.  His older half-brother has some “pivotal” scenes in the film that he hopes will make him an in-demand commodity again.  Turtle, their driver, has apparently slimmed down and also wisely invested to the point that he lives better than his best friend, and famous actor, Vince.  Eric, Vince’s friend and manager is trying to deal with his ex-girlfriend Sloan (Emmanuelle Chriqrui) having his child, and balancing all of the ladies he is seeing. 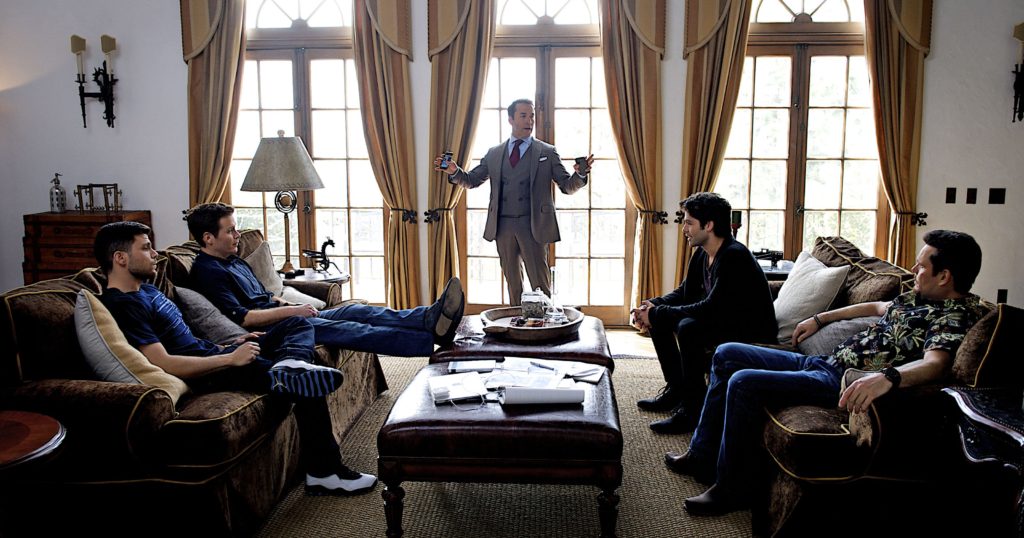 One of the hallmarks of the show as well as the film is the number of cameos that make appearances giving an insider feel to the whole Hollywood scene.  There are an abundant amount of those, with stars playing over-inflated versions of themselves that litter every scene.  Mark Wahlberg (also a producer of this film), Jessica Alba, Warren Buffett, Tom Brady, Jon Favreau, Bob Saget, Kelsey Grammer, Liam Neeson, Martin Landau, Armie Hammer, Pharrell, and many, many, more.

On its best day, Entourage was a brilliant satire of the sleazy side of the business, but on its worst day, it was just an excuse for HBO to play to an almost exclusive male-centered audience looking for gratuitous topless scenes of women, money, and exploits.  And make no mistake, there is plenty of that here throughout the film.

To somehow balance out some of the more exploitative elements, MMA fighter Ronda Rousey (Expendables 3, Furious 7), is given full reign to turn the tables on the boys club, mainly Turtle with a literal cage match where she takes Turtle to task.  Otherwise, the women are the targets of most of the more gratuitous elements of the film, save for one scene involving “Drama”.

Billy Bob Thornton plays his usual slime-ball character, this time named Larsen McCredle, a highly powerful Texas businessman who is financing the Ari’s studio, and specifically Vince’s film.  He shuts off the money supply they need until his son Travis (a virtually unrecognizable Haley Joel Osment) finds out what’s happening in L.A. regarding the movie.  The film breaks down from there into various plot lines involving each of the characters and their development, which is mostly arrested…and not in a funny Blueth sort of way.

The film features a constant soundtrack with some solid entries that keeps things moving along for the most part.  The problem with the film is that, in addition to the high amounts of marginalization of women, it just feels like something meant for another HBO episode of the show, and not a feature film.  It is easy to follow for those who have never seen the show, and there are some very funny moments, but nothing that sustains the narrative throughout the entire running time.

While meta-driven shows like Community have long campaigned for “six seasons and a movie”, this transition of Entourage from the small screen to the silver screen, might give these other shows pause.  What works well on a weekly show like Mad Men, Arrested Development, Walking Dead, Breaking Bad, or even its spinoff, Better Call Saul, does not always translate to a feature length movie.  Weekly shows have the time to build the characters, supply the quirks, inside jokes, and catch-phrases that audiences grow and connect with. A film has to grab your attention, supply all of that and move a story forward in usually under two hours.  It can be done, but often times it is not a smooth transition for shows trying to make the leap.

Entourage has always been the biggest “insider” show around, basking in the glow of the very industry they mock, and ironically represent.  And it is their insider status that will please fans of the show who long to see the gang again, but which will also keep many people, who are unfamiliar with the show, out. Being released on a Wednesday is a smart move that someone like Ari Gold might have come up with, especially given the fact that Melissa McCarthy’s comedy Spy will be released a quick 2 days later.  There is no doubt who the comedy box office champion will be this weekend.  And just like Vince’s fictional film within the movie, Hyde, Entourage might also just be seen by a few close friends of the show, but probably not by the public at large.