How Do You Solve a Criminal Case When Your Main Perpetuator Just Might Be the Devil? 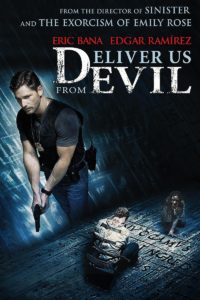 Eric Bana is New York Police Officer Ralph Sarchie.  Officer Sarchie has seen his fill of evil.  He has busted every form of it at one time or another working alongside his partner, Officer Butler (Joel McHale).  When a woman throws her baby into a lion pit at the zoo without warning, coupled with a mysterious man caught on tape being in the lion pit when it happened, Officer Sarchie is at a loss for words on why this happened.  As he digs deeper into the case, and as he begins a pursuit for the unidentified man, more and more cases begin to pile up that he can’t explain, but they might just be related.  When the evil he is sees in these unexplained cases begins to show up in his home, terrorizing his family, he must begin to decide what he truly believes in.

Deliver Us from Evil is a film based on the book “Beware the Night” by the real-life Officer Sarchie and Lisa Collier Cool.  Based on actual case files from Sarchie’s time on the New York streets, the film can honestly mean the typical tag line used in so many horror films today, “based on actual events”.  How close they relate to the real case files can be debated, but it provides a more plausible reality to the story itself knowing that these are actually from real case files of a living New York Police Officer.

As he did with 2005’s The Exorcism of Emily Rose, director Scott Derrickson uses the film to ask the question of “what do you truly believe about the supernatural?”  In Emily Rose, the question was posed to an unbelieving attorney whose task it was to defend the priest being accused of contributing to the death of a young woman whom he performed an exorcism on.  As the attorney, played by Laura Linney, digs deeper into the case, she begins to experience things she can’t explain with her logic, and scientific notions.  Is it in fact the work of the supernatural? We are told at the end of that film, by way of a verse on Emily Rose’s tombstone, to work out our salvation with fear and trembling.  Deliver Us from Evil seeks to make sure that we truly do that.

A former Catholic altar boy, Officer Sarchie has no use for the faith of his youth.  His wife (Olivia Munn) is a faithful attender of mass, along with their daughter, but the good officer will not partake with them.  As he is investigating a woman in one of his cases, he encounters an unorthodox priest, Father Mendoza (Edgar Ramirez) who has been working with the woman, claiming that she is actually possessed.  When Sarchie laughs it off, the priest informs him, as well as us, that there are two types of evil in this world.  The first type, he says, is the evil that men do, called secondary evil. We are then told that there is primary evil, and that is “something else entirely”.  When Officer Sarchie explains that he has never seen anything that can’t be explained by human nature, Father Mendoza tells him, “then you haven’t seen true evil”.

Officer Sarchie has a similar faith journey in this film as Laura Linney did in Emily Rose.  Beginning the film as an unbeliever, Officer Sarchie must wrestle with the things he can’t explain if he is to make any progress in solving the cases before him.  We are meant to take that journey as well.  Is it just weird circumstances, or is there a primary evil behind these events?

While the trailer gives the appearance of a more straight-forward horror film, this film is actually more layered than that.  It is best described as a suspenseful murder case with elements of the supernatural interspersed.  At times, it is effectively creepy in much the same way as a film like Sevenwould be, but then transitions into the supernatural, demonic possession elements of a horror film without abandoning the crime drama that it is.  Scott Derrickson is well versed in how to play on your natural fears, both real and imagined, in every scene. Not so much to say that this is a truly scary film, but just one that effectively works those angles to keep the tension high as Officer Sarchie pursues the perpetrators of these crimes, along with the help of Father Mendoza. Using the movie poster to insinuate that the Devil might be involved will only reinforce that.

Joel McHale plays a serious cop, but provides most of the comic relief of the film in a part well-suited to his strengths.  Eric Bana is solid, and for some reason as I watched the film, I kept thinking about what might have been had he remained the Hulk and actually appeared in The Avengers. That aside, this is an interesting role for him, and in return, his presence helps the script achieve more than it should. It also is set up nicely as a vehicle he could return to, with more case files from Officer Sarchie’s book providing the main potential story lines for any sequels.

Deliver Us from Evil, while not a great film, is a good and creepy one.  It is much better than all of the horror films released this year that I have seen (including Paranormal Activity: The Marked Ones, The Quiet Ones, etc.).  It will confront you with some theological questions that, like Officer Sarchie had to do, must be answered one way or the other.  Whether you choose to consider them, or simply allow them to be a device in the film that moves the plot towards its ultimate conclusion is up to you.  In real life, Officer Sarchie came face to face with primary evil, and then made a decision that has affected the rest of his career and calling.  Director Scott Derrickson wants to leave us with that same choice.