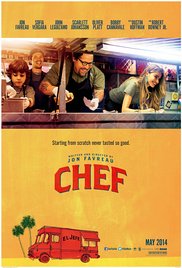 Chef is a return to form for writer-director John Favreau; the type of personal indie film he used to make before the big studios came calling.  In fact, it might be most personal film yet.  It’s certainly one of his best, and a welcome respite from the creative rut he’s been in lately.

It’s impossible to review Chef without speaking to the metanarrative that informs the film, because that’s the entire point.  Favreau writes, directs, and stars in the story of an artist who started out edgy and exciting, but whose art became more and more safe and predictable as he became more and more beholden to the money that financed it.  He longs to go back and do the kind of work he used to do, but it’s risky, and his benefactor tells him that it’s not what the people want—they want what they already know; what’s already proven to be popular and to sell well.  The art has taken second place to the commerce, and the critics are starting to notice and push back.  After a public split with his boss, the artist takes a risk and rediscovered what he loved in the first place—and becomes creatively re-energized. 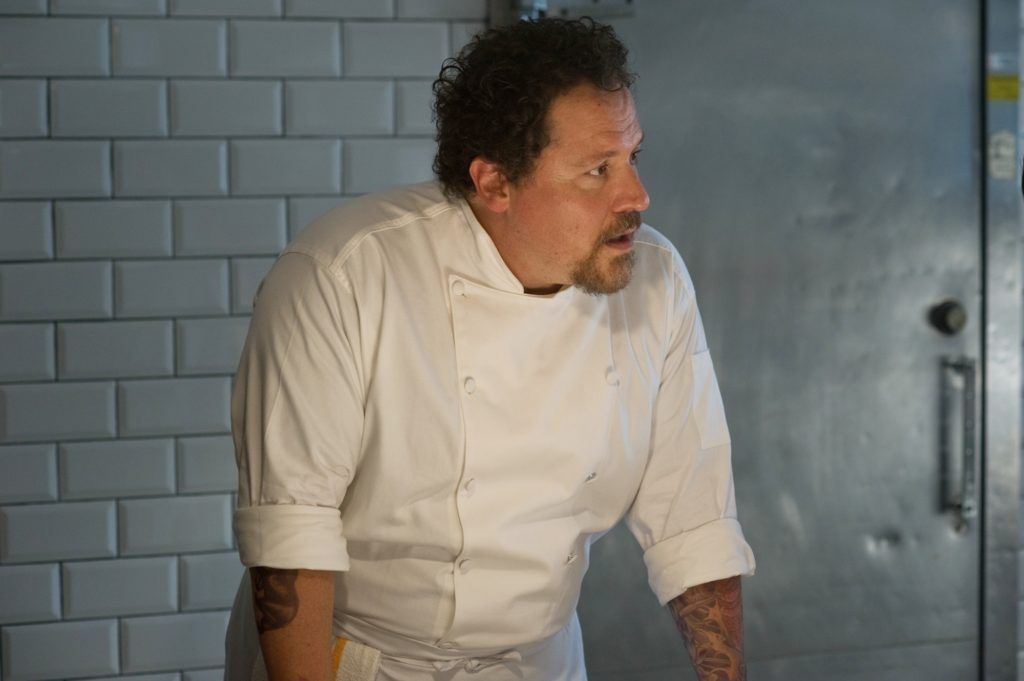 This is the parallel story of Jon Favreau the filmmaker and Chef Carl Caspar, the Jon Favreau stand-in and titular character of the film.  Though the filmmaker has artfully sidestepped questions of how much of the movies are based on actual situations and people in his life[1], the parallels are all too obvious.  Favreau (or “Favs” as he tends to go by) was part of the indie filmmaking boom in the 90’s; a contemporary of guys like Jim Jarmusch, Kevin Smith, and Richard Linklater.  But unlike those other filmmakers, who have more or less remained true to their indie roots (with varying degrees of success), Favreau found himself being possessed of bigger and bigger budgets for bigger and bigger properties and bigger and bigger studios.  Perhaps it was his parallel career as an actor that gave him greater visibility, but whatever the reason, his star was consistently and steadily rising from the 90’s to the 2000’s:  from notable roles in Rudy and on Seinfeld, to writing, co-producing, and co-starring in the indie darling Swingers, to a recurring part in Friends, to his directorial debut Made, to playing himself as a hotshot Hollywood director in The Sopranos, to co-starring in Daredevil, to his first big special-effects movie, Zathura, which probably helped to get him the job of launching what has become the second-most popular movie franchise of all time—the Marvel Cinematic Universe, with 2008’s Iron Man. 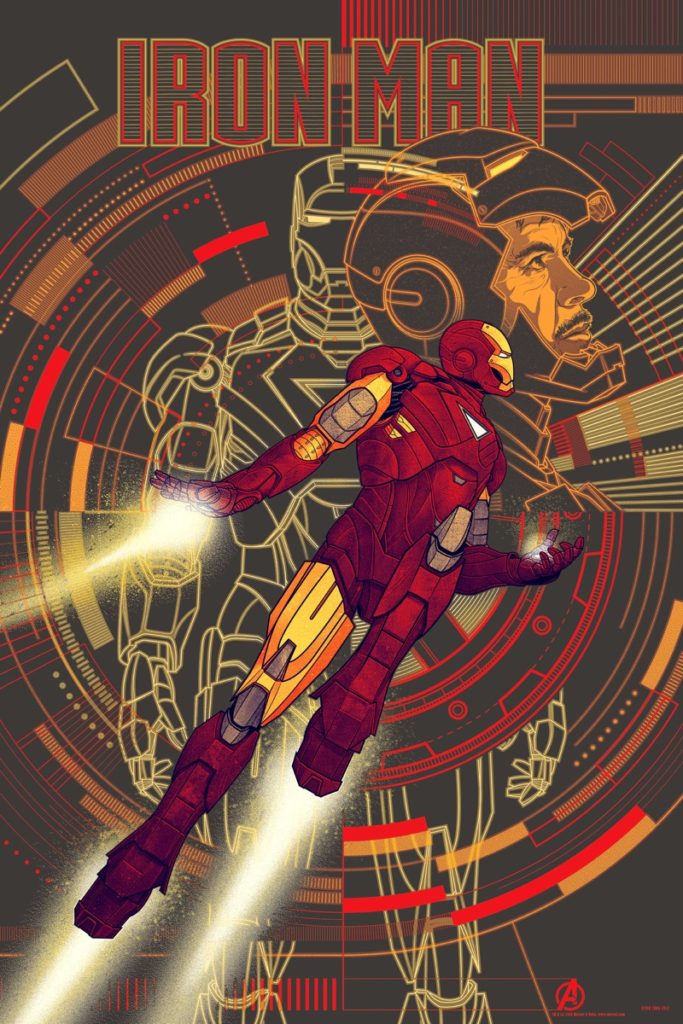 Iron Man was a blockbuster that came out of nowhere and blew everyone’s expectations away.  Along with The Dark Knight (which came out that same summer), it launched the current superhero movie boom that is stronger than ever right now, six years later.  It put Marvel Studios on the map in such a big way that they soon became irresistible to one of the biggest entertainment companies on the planet.  It was a new zenith for both the director and the star (Robert Downey Jr.).  Neither artist had ever been bigger, and a whole new world of possibilities had opened for both of them.  Downey Jr. became the lynchpin of the MCU, as well as starting another franchise with Sherlock Holmes.  As for Favreau, his place as a filmmaker had been solidly established, and he came back to direct Iron Man 2, with an eye towards directing The Avengers as well.  But that’s when everything started to go downhill.

It’s at this creative stalling point that we meet Carl Caspar at the beginning of Chef.  He’s earned a spot working in a very successful L.A. restaurant.  His food is loved by the patrons who eat there, but he’s getting bored with making the same menu night after night.  Riva (Dustin Hoffman), the owner of the restaurant, has promised him creative control of the kitchen, but promises are easily broken.  There comes a night when Ramsey “The Ram” Michel (Oliver Platt), one of the L.A.’s biggest food critics and the author of a very influential foodie blog, is to dine in the restaurant.  It’s a crucial turning point in Chef Caspar’s career, and he wants to make a whole new exciting and daring menu to serve to The Ram.  But Riva bristles at the idea of change, and pressures Caspar instead to make the same menu that has proven successful over the past few years.  The message is clear—the time for risk-taking and stretching yourself creatively is over.  Now that you’re a success, you need to stick with what works—in other words, if it ain’t broke, don’t fix it. 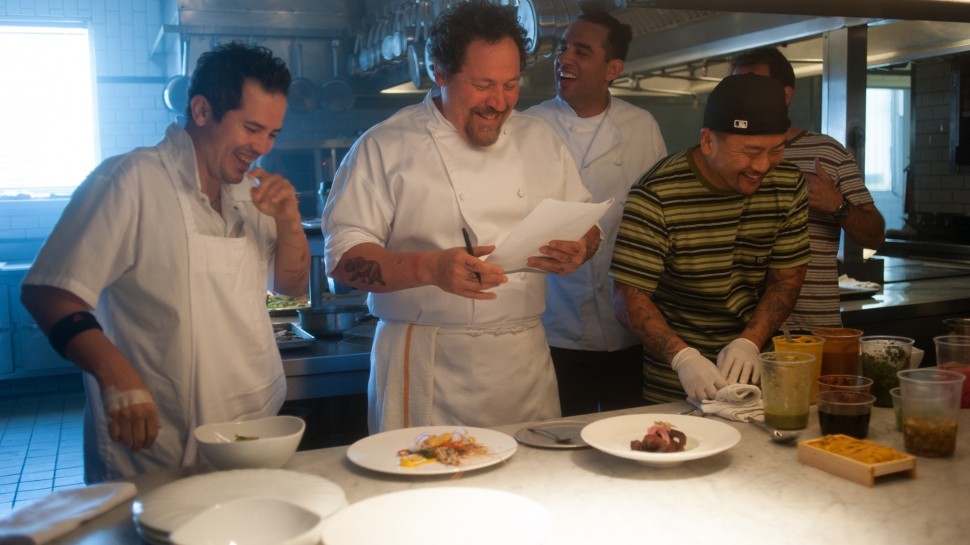 I would imagine that this is a unique look into what Favreau’s experience making Iron Man 2 must have been like.  Although Favs certainly isn’t letting on, I can’t help but wonder if Riva is a proxy for Marvel Studios’ head honcho, Kevin Feige.  Or perhaps he’s simply an amalgamation of various studio heads and executives with whom the filmmaker has become increasingly frustrated over the years.  But no matter who Riva is meant to represent, the fact remains that Iron Man 2 was not a pleasant experience for Jon Favreau.  Despite his part in making Iron Man more successful than anyone expected it to be, Marvel Studios had an empire to build that was bigger than any one filmmaker.  In many ways, IM2 was a casualty of that vision; devoted just as much (if not more) to setting up connections between future Marvel films than existing on its own.  It was a little too safe, yet didn’t have enough of an identity of its own, and fans and critics alike did not fail to notice.  To date it remains the most consistently lowest rated of the Marvel films.[2]

Audiences were even less kind to Favreau’s next big studio project, Cowboys and Aliens, a critical and commercial failure that fell hard on its face, barely making its budget back, and becoming one of the most expensive Box Office bombs in movie history.  Critics were underwhelmed and understandably disappointed.  Where was the Jon Favreau who made Swingers?  Or even the guy who made Iron Man one of the best and most original superhero movies ever?  This is essentially what The Ram says in his scathing review, where he wonders what happened to one of most exciting new chefs in the city, who used to be on the cutting edge of food culture.  But now he’s become safe and predictable—he’s coasting.

This wounds Caspar deeply—not just the brutality of the review but also the harsh truth that he must now face.  At first, he falls apart.  He blows up at Michel online, then angrily confronts him in public.  It’s a moment filled with pathos, as you can hear the deep hurt and shame in Favreau’s voice, and see it in his eyes—he tells The Ram how much it hurts to have a critic tear something apart that he has sweat blood over—and it’s clear that it’s not just Caspar laying his soul bare in that moment.

Chef Caspar tweets a cheque that he can’t cash

I have to admit, I don’t often think about how a negative review might impact the feelings of the filmmaker.  It’s almost like driving while stressed out—you get angry at the other cars, not necessarily the drivers inside them.  When I savage a movie, I’m not really thinking about the hard work put in by the people who made it, and were trying their best to make something special.  I’m attacking the movie itself, as if it’s some kind of conscious entity.

Even though I’m a highly empathetic person by nature, my duty as a film critic often requires me to suppress that empathy.  Occasionally it chafes, like when I reviewed Blue Like Jazz two years ago after having met the filmmakers at a special screening.  Sometimes everything comes together, like when I reviewed Sinister, and was told by the director himself how much he loved reading the review.  But usually, it’s a non-issue.  I don’t worry about it because I’m pretty small potatoes.  Our readership numbers in the thousands, which is relatively small-time compared to the big websites.  I know that it’s very rare for a filmmaker to read what we write about their movie here at ZekeFilm.  It happens every once in a while—but it’s the exception rather than the rule.

But how does it feel when someone like Peter Travers or Richard Roeper rips your film a new one?  What if it’s something you really poured your heart and soul into, only to have it torn to shreds by someone influential—someone who could even make or break your career?  How would I feel if I made a movie that I was really proud of; that I worked really hard on…only to have my favourite critics take a big, steaming dump all over it?

You tend to assume that all those Hollywood types have super-thick skin, and it’s pretty easy not to consider the feelings of someone you don’t know personally anyway.  But behind the glitz and glamour of the marketing machine, filmmakers are just people with hopes and dreams.  They have good days and bad days.  They live and work and breathe and love and lose; they feel elation and they feel shame.  Sure, some of them may be thick-skinned, but I’m sure just as many (if not more) wear their vulnerable hearts on their sleeves—after all, as an artist who is married to an artist, I can tell you that we tend to be pretty sensitive folks.  I don’t know how sensitive Jon Favreau himself is, but if this character he’s written is any indication, those negative reviews must hurt his heart.

In the movie, Chef Caspar’s very public meltdown is captured on cell phone cameras (his ignorance of the way the internet works kind of a running joke throughout the film), and the video of him yelling and screaming at Ramsey goes viral.  It’s the final nail in his professional coffin.  Between his frustration with his boss leading him to quit in protest after having his heart broken by The Ram, and on top of that becoming a public spectacle on the internet, Caspar ends up at a type of rock-bottom, with no prospects and no artistic outlet.  But in being brought down and humbled, he is finally able to listen to others in his life and begins a journey of discovery that puts him back in touch with who he used to be.  This journey of discovery, which involves starting up a food truck and driving it across the country, is the metaphor for Favreau making this film.  With Chef, Favs has re-discovered the artist he used to be, informed by the years of experience and growth he’s undergone since, making Chef one of his finest films to date.  The way he’s laid himself bare on film makes him relatable and your heart goes out to him, even when he’s acting like kind of a jerk (and he does this often—he’s a flawed character—someone who wants to do good but his selfishness, his sensitivity, and his neurosis sometimes get in the way).  Not only do we get to see him re-connect to his roots, but to his family as well—a subplot that might feel maudlin if it weren’t so earnest and well-executed.

When a talented filmmaker makes a movie that is this personal, it’s usually something very special, and Chef is no exception.

[1] His next movie is The Jungle Book for Disney—he doesn’t want to bite the hand that’s feeding him, after all.

[2] I actually really like the movie, although it’s often my least favourite of the MCU.  But even the worst Marvel Studios movie is better than 90% of other blockbusters.