Does the Final Completed Film of Paul Walker Help Cement His Action Legacy? 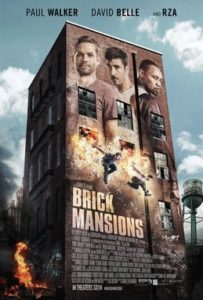 If you remember late night cable movies on stations like HBO and Cinemax in the 1990’s, you’ll remember that they always had an action block that showed B-level action films.  Sometimes these films would have a former A-list star, but often you’d be content with films starring Don “The Dragon” Wilson, Lorenzo Lamas, and Dolph Lundgren that featured car crashes, fist fights, mullets, and the firing of enough ammo to level a small country.  And while those films have largely littered late night cable television for years, it seems that this type of action movie is poised and ready to be unleashed on the box office.

Brick Mansions is a film that is built to simply entertain.  It has wall to wall action complete with car chases, lots of David Belle showing off his Parkour moves, and Paul Walker driving fast cars.  There is also a fair amount of humor infused throughout the film that allows the cheesiness of the plot to actually work.  Had this film taken itself seriously, it would have been an unmitigated disaster.  As it is, Paul Walker’s final completed film will allow him to endear himself to the audience one last time before 2015 when he will appear in his swan song, the seventh entry in the Fast and Furiousfranchise.

Luc Besson co-wrote the screenplay and sheds all unnecessary details from the plot.  The result is a film that uses the plot lines of every other action film and weaves it into its own presentation.  There is the undercover cop (Walker) who is seeking to bring down the evil arms/drug dealer (RZA) who killed his father.  His has the stereotypical one last assignment before he can feel that he brought his father’s killer to justice.  There is also a corrupt politician seeking to destroy an area of the city in order to bring in luxury high-rises and all the wealth that comes with it.

The area of the city that is about to be destroyed for the sake of progress is a place in Detroit called “Brick Mansions”.  There are drug kingpins, addicts, and gangs.  But just so you don’t believe this place is meant to resemble Detroit of today, this film takes place in the distant future of 2018. A security fence has been erected around “Brick Mansions” to keep the rich people safe from the scum and vermin that populates the projects of “Brick Mansions”.  Think about another 99% vs. the 1% type of scenario.

Throw in the pretty ex-girlfriend (Catalina Denis) of one of the “good guys” (David Belle) in the projects who is trying to fight against the drug kingpin, and have her get kidnapped and held for ransom with some plot twists from Michael Bay’s The Rock and you are ready to rumble. And just so no one has to think too much, most of the characters are only given a first name to remember. You’ll also laugh at the end, as I did, when you see how much the gangstas and criminal element change their ways from the opening scenes to the end scenes where “Brick Mansions” is transformed before our very eyes.

The dialogue and acting are straight B-movie hamminess but keep things light.  This is very much appreciated knowing that everyone in the theater is coming out to see this film due to Paul Walker’s untimely death this past fall.  Seeing him doing dangerous stunts involving fast cars is a bit surreal knowing how he met his demise.  By helping us to laugh, it alleviates much of the tension that would have been there had this been a serious-minded action film. There is a touching farewell message to Walker at the end of the film, but there is an awkward moment where the most eerie dialogue is a line from Walker’s Fast and Furious films, “ride or die”.

The villain and his henchmen are over-the-top.  RZA spends much of the film trying to be feared by his underlings while he calmly cooks, always chopping up hot peppers to put in his late mother’s recipes. Nothing says hard criminal like chopping peppers. He employes out of shape thugs who are constantly bumbling things up for him, along with standard throwaway henchmen who are ready to be shot randomly for their ineptitude.  A female thug in his service is nick-named “Razor” and has an obsession with….you guessed it: razors.  Predictable? Sure.  But its all in good fun.

And yet, despite all of the cheesiness there are some really good things to see in this film.  Some of the stunts are well executed and surprising. Surprising, because you could see them showing up in a film of much greater pedigree and still not feel as if they are out of place at all.  David Belle, who I thought looked like a jacked-up, 40 year old version of McLovin’ from SuperBad, demonstrates some impressive Parkour moves using the “Brick Mansions” buildings as his personal playground.  Given his performance here, it is not inconceivable that he could find a nice career playing parts Jean Claude Van Damme would have taken in his heyday.  With the timing and humor he displayed, this could be a great career move for him.

In the end, Brick Mansions will have a short run.  Most will turn out to see the film out of curiosity of what Paul Walker’s final completed film is like.  What will happen is that some of that curiosity will be rewarded with a good, old-fashioned B-grade action film that will leave you with a smile on your face as long as you buy into the notion that this film does not take itself seriously and neither should you!