Both the Japanese and English Language Versions 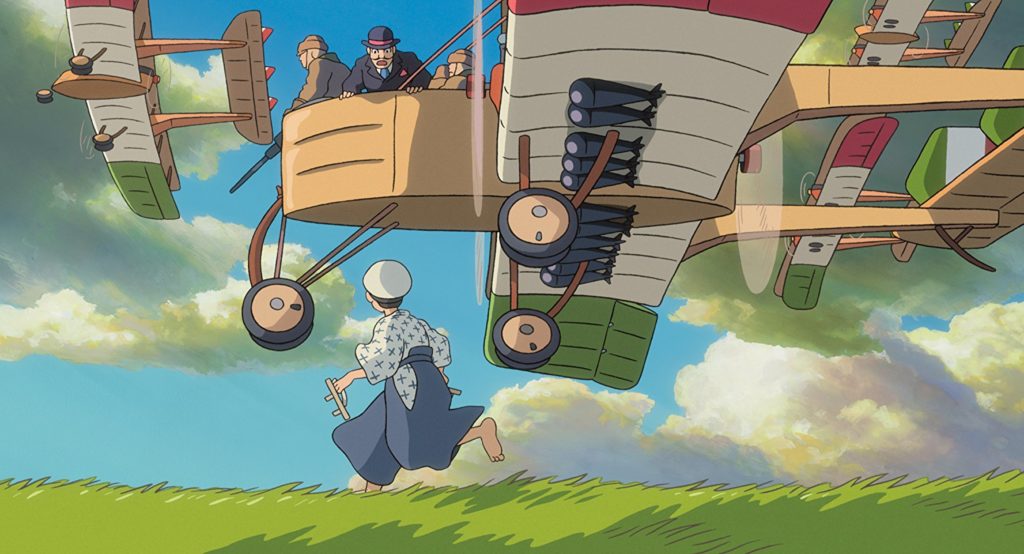 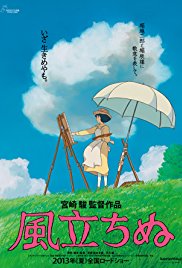 Hayao Miyazaki wants to fly. If the great filmmaking animator’s distinct filmography tells us anything, a boyhood need to soar is certainly high on the list. From some of his earliest directorial efforts onward, this is evident; Castle in the Sky, with its rocket-packs & dirigible daring-do to the zipping-on-a-broomstick wonder of Kiki’s Delivery Service, and several others. Now comes The Wind Rises – the ostensibly final feature film of Hayao Miyazaki. (But, lest we forget, 2008’s delightful Ponyo was also said to be his last. This one though, feels considerably more like the period at the end of a grandly majestic sentence.) An almost achingly personal and thoroughly “grown-up” film, The Wind Rises is (on the surface, at least) different from any other film of his that I’ve seen.

In the interest of full disclosure, however, I should say that I have not seen all of Miyazaki’s acclaimed work. (Perhaps 2/3s of it.) And consequently, I’ve yet to truly come to love his oeuvre; I still approach it at the detached level of “great appreciation”. (That said, Kiki’s Delivery Service is the one standout that I deeply adore and wouldn’t want to do without.) There is much to appreciate in The Wind Rises– a pre-WWII tale of a wide-eyed and fanciful young devotee to the rapidly evolving art and science of modern aviation. (I should also clarify that this writing is in regard only to the Oscar nominated Japanese language version of the film, the only version I’ve seen. I can’t speak to how the newer English language edition compares.) Miyazaki was born in 1941, placing him firmly as having come of age in the era of Japanese postwar hand-wringing confusion, the time that generated uneasy national-identity questioners such as Kurosawa’s Rashomon and Honda’s Gojira. Miyazaki would’ve been an adolescent then, perhaps old enough to sense the deep fracturing of his country’s centuries-deep honor system, but not quite mature enough to grasp the horror Japan inflicted upon other parts of the world. A formative nationalist blind spot in terms of empathy beyond ones borders – something far from unique to postwar Japan, but a suspect factor nonetheless.

The Wind Rises plays as an exceptional product of such a mentality. The young hero, for all his many admirable qualities, ends up creating the “zero” bomber, the utilitarian aerodynamic plane his country used in the attack on Pearl Harbor. And like Martin Scorsese’s The Wolf of Wall Street (another acclaimed film to arrive late in 2013, just on time for awards consideration), the director has no interest in looking at the fallout of the damage the protagonist had a key hand in. And not that any film should ever require such “equal time” in its depictions, but for this American critic, the fact that our nature-loving, life-affirming humanist protagonist of The Wind Rises fails to grapple with the notion that his hard work ultimately amounts so much death and global chaos is enough of an uneasy takeaway to keep this otherwise beautifully crafted and deliberately paced (certainly an “old man film”) work from landing within my own top 20 films of 2013. 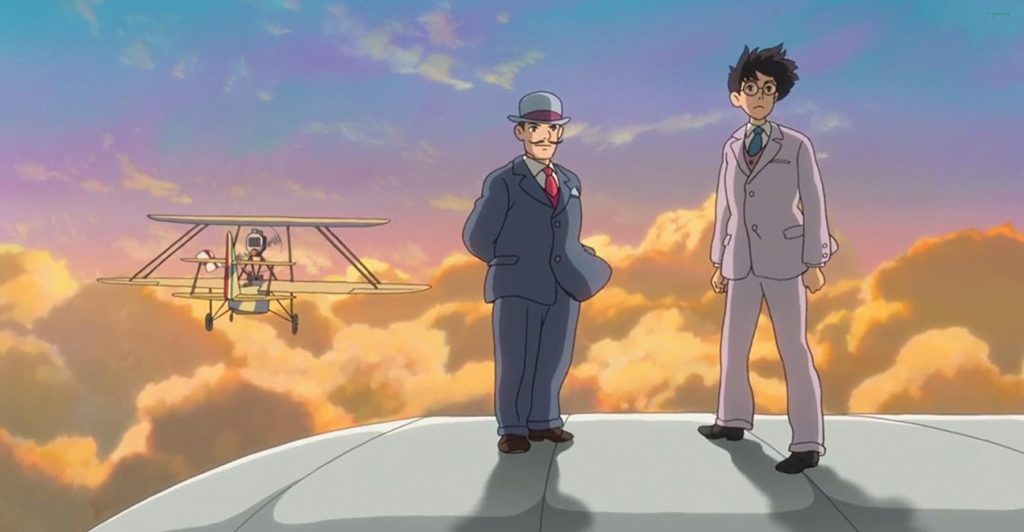 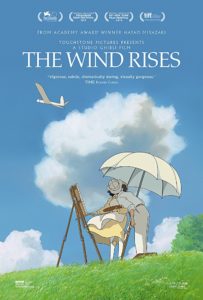 I myself have seen all but two of Hayao Miyazaki’s movies (I refer specifically to the feature-length films that he himself directed. I’m less familiar with those which he only wrote or produced, or his various short films). I’ve always harboured a great love for his whimsical and fantastical flights of fancy, from the medieval siege fantasy Princess Mononoke, to the delightful faerie stories My Neighbor Totoro and Ponyo, to the wonderfully weird quasi-science fiction epics Nausicaä of the Valley of the Wind and Castle in the Sky. Spirited Away, a dark faerie tale of a girl separated from her parents in a strange world of gods and demons (a narrative that implies a very bleak subtext when you examine it more closely), despite the edge of darkness it rides, is still my favourite Miyazaki Film to date.

Of course, nearly every last one of Miyazaki’s directorial efforts have taken place in this type of wonderful reality where castles can walk on iron legs and cheeky teenage witches ride about on broomsticks. Studio Ghibli’s more mundane, reality-based dramas tended to be handled by other directors in the company, with the master himself only stepping in to personally direct his epic fantasy myths and quasi-steampunk historical science-fiction. So as far as I can tell, The Wind Rises may be the first feature-length film that Miyazaki has personally directed which does not deal with the phantastycke.

And I think there must be a very good reason for this—the fantastical is Miyazaki’s wheelhouse; the area in which he excels. While I appreciate his stretching himself by directing a drama with no supernatural or science-fiction elements, I wonder if perhaps he waited until far too late in his career to try something new. In my opinion, The Wind Rises, which is sadly and slowly dull compared to the rest of the master’s oeuvre, is a sad note to go out on. Perhaps he simply waited too long (five years since making his last film, the delightful Ponyo). But for whatever reason, if this is truly Miyazaki’s final film, then he has gone out not with a bang but with a whimper.

It’s not that The Wind Rises is a “bad” film per se. It’s actually very well-made. Coming from Miyazaki-san, I would expect no less. But it cannot hope to stand in the same league as the rest of his catalogue. It does not engage or thrill or inspire a sense of wonder the way the rest of films have, despite a protagonist who seems to have a sense of wonder himself, but who grows up to be so painfully boring, with a flat affect that does not even waver when he faces great personal tragedy. I suppose you can chock that up to old-school Japanese stoicism, but I don’t remember any of Miyazaki’s other immortal characters being this lifeless. And a Miyazaki movie has certainly never put me to sleep before, which this one did a few times—despite the fact that it’s the first Studio Ghibli film I’ve had the pleasure of seeing in an actual movie theatre!

The quality of the English voice-acting adds little of value, sullenly reflecting the impassiveness of the main characters. Despite the quality of the American cast, the voiceovers are so even-keeled and listless that I had trouble distinguishing between the voices of actors whose tones I almost always recognize, even in television commercials. It took me forever to place John Krazinski, for example, even though his voice is normally very distinctive. And in this context, it sounded almost indistinguishable from Joseph Gordon-Levitt’s voice, which would be unthinkable in any other milieu. And even though I always recognize their voices in other media, I didn’t even know that William H. Macy, Elijah Wood, Martin Short, and Mandy Patinkin were in the English version until I looked the cast up on Wikipedia to help me write this review. Werner Herzog sounded like Christoph Waltz, and the only reason I recognized Mae Whitman is because she is such a fantastic voice actress (one of her most prominent roles is the voice of Tinker Bell in the DTV CGI Disney Fairies series of movies, which get a lot of play in our toddler-centric household).

I talked in my Lego Movie review about how hard voice acting is to nail, even for seasoned screen actors (comedic actors tend to do it best). I can only imagine that these fine actors, who have done such wonderful work in other films and television shows, didn’t get any help from English voice director Gary Rydstrom, whose talent seems to be of far better use in his native field of sound design (Rydstrom’s notable contributions in this capacity include such films as Indiana Jones and the Temple of Doom, Spaceballs, Backdraft1, Terminator 2: Judgment Day, Jurassic Park2, Titanic, Saving Private Ryan, and most of Pixar’s movies). For these invaluable contributions to the world of film, Rydstrom has earned the nicknamed “Sound Master,” and it is a well-earned title indeed. It’s just too bad that his capacity for sound doesn’t extend to the human voice.