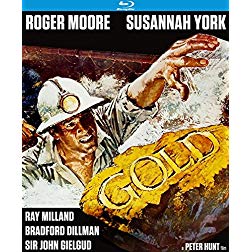 Gold (How does this movie not have an exclamation point in the title?) is a thriller from 1974 starring Sir Roger Moore (of James Bond fame). Based on the novel Gold Mine by Wilbur Smith- who also co-wrote the movie’s screenplay alongside Stanley Price- Gold tells the story of Rod Slater (played by Moore). Slater’s a hard drinking womanizer, who’s nevertheless good at his job as the underground manager at the Sonderditch gold mine in South Africa. A terrible accident at the start of the movie creates an opening for Slater to be promoted to General Manager, but he might just be getting set up to fail, and that failure could cost hundreds of lives. As directed by Peter Hunt (On Her Majesty’s Secret Service), Gold is a taught and effective thriller.

Gold is a taught and effective thriller.

Opening scenes of rescue crew led by Moore establish the deepness of the mine. The sky recedes to a mere point of light as they ride the elevator down, and then they have to transfer to yet another lift to go deeper still. The film sells the dark, cramped, hot, airless conditions of the mine. There’s a documentary style to the filmmaking. The characters do their job without comment and the camera just watches them work- such as when they have to prep a leg for emergency amputation after it has been crushed by fallen rock.

A secret cabal, led by Sir. John Gielgud (Arthur, 1974’s Murder on the Orient Express), plans to flood the mine and drive the price of gold up, even though all the men underground would likely be killed by the rushing water. This sounds like a plot worthy of being foiled by James Bond. Moore had stepped into the 007 role the year prior to Gold with the release of Live and Let Die, but Rod Slater isn’t exactly Bond. He likes the finer things in life, but can’t really afford them. He’s a womanizer, but is also a divorcee who is losing a third of his salary to alimony. He’s a dropout, and has a (deserved) reputation for a bad temper. All of his issues taken together would probably disqualify Slater from the top spot, but to the group pulling the strings behind the scenes, he’s the perfect fall guy.

The cabal’s inside man, Lemmer, was killed when the mine collapsed. It was Lemmer’s job to ensure the wrong patch of rock would be drilled through, flooding the mine from a vast underground ocean. With Lemmer gone, the cabal must use trickery and distraction to get Slater to order his men to drill where they’re not suppose to. Happily, Slater’s boss, Manfred Steyner (Bradford Dillman, who played villians on countless 1970’s TV shows) has a wife who’s seems like she’s as into Slater as Slater is in her. This is Terry, played by Susannah York (Superman). Slater and Terry begin an affair, and Manfred might not like it, he knows that he can use it to keep Slater out of the way when the plot comes to fruition.

Maurice Binder designed the stylish title sequence. The title GOLD (again, no exclamation point! Come on, movie, do I have to think of everything?) is emblazoned across the screen as big as life (or at least as big as your TV allows, and that can be pretty big these days). Inside the block letters plays scenes of gold mining, processing, smelting and shaping into jewelry. Over the images, a brassy, jazzy score by Elmer Bernstein (The Magnificent Seven, among hundreds of other scores) thunders. It sets a tone for the film, and Gold does not disappoint.

The villian’s plot adds much more than a bit of melodrama to the proceedings. One of the bad guys is literally rubbing his hands together in glee as the climax to their plan is unfolding. It’s all a bit ‘Saturday Morning Serial,’ especially when compared to the more naturalistic style Hunt uses when he’s just recording the day-to-day operations of the mine. I don’t know anything about gold mining, or how it was done in South Africa in 1974, but these scenes have an air of authenticity to them. Still, the tonal shifts aren’t jarring and the action scenes will keep you on the edge of your seat.

The action scenes will keep you on the edge of your seat.

Gold ignores the elephant in the room that is Apartheid. In 1974, South Africa was facing stiff opposition from abroad over its severe system of racial segregation. Throughout the decade, internal resistance to the laws became more and more militant, resulting in violent crackdowns by the government, which in turn sparked more violent unrest from protestors. None of this is evident in the movie (which was a UK production, and was shot mainly in England, with only a small number of scenes filmed on location in South Africa).  The movie treats its Black characters much more generously than they would’ve been treated by the South African government at the time. At the time, Gold recieved much criticism for its choice to shoot any scenes at all in South Africa.

Kino Lorber’s Blu-Ray release of Gold comes packaged with a collection of trailers, including Gold’s own (which totally spoils the fate of two characters, so viewer beware!). It also comes with an audio commentary by Kino Lorber mainstay Howard S. Berger. 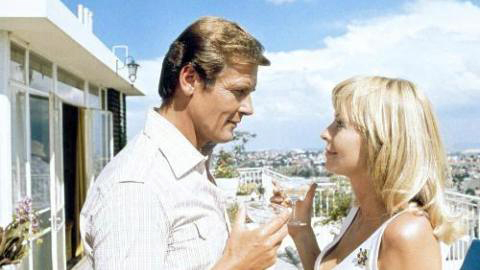 The images used in this review are for illustration purposes only and should not be taken as representative of the image quality on the Blu-Ray release.