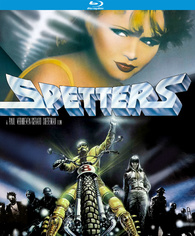 Dirty, rough, hard to follow…  That’s amateur motocross for you.  It’s also the world inhabited by Paul Verhoeven’s 1980 youth-bruiser, Spetters.  Perhaps appropriately if not conventionally, Verhoeven, in his storytelling, follows the form of this rugged competition.  The movie takes wild sharp turns, it can be loud and energetic, even filthy.  It’s its young practitioners, though, that fascinate the filmmaker the most.

They race, they jump, they skid; mud clots gets kicked up.  Sometimes they wreck, hard.  Afterwards, they all come away covered in the dirt of the track.  Young, raw, testosterone-fueled drive powers their pastime, and by extension, the film.

The inevitable crashing in of real life is what Spetters is about.  All the while, don’t expect there to be anyone to cheer for, or even like.

For all that, though, most of Spetters does not showcase motor biking.  In fact, there may be more scenes at the race track snack stand than on the actual race track.  This is due in part to the character of Fientje (Renée Soutendijk), a fry cook blonde who’s attitude and ambition are as sharp and pointed as her thin yellow tank top, perpetually clinging to her.  It’s immediately apparent that she’s positioned herself at the hungry heart of motocross for reasons beyond hawking bad food to young adrenalized misogynists and their fans.  Fientje makes a stealthy, late entrance by comparison; but then proceeds to slowly take over the entire ensemble presentation.  She steals the show, and utterly earns her prominence on the original airbrushed theatrical posters. 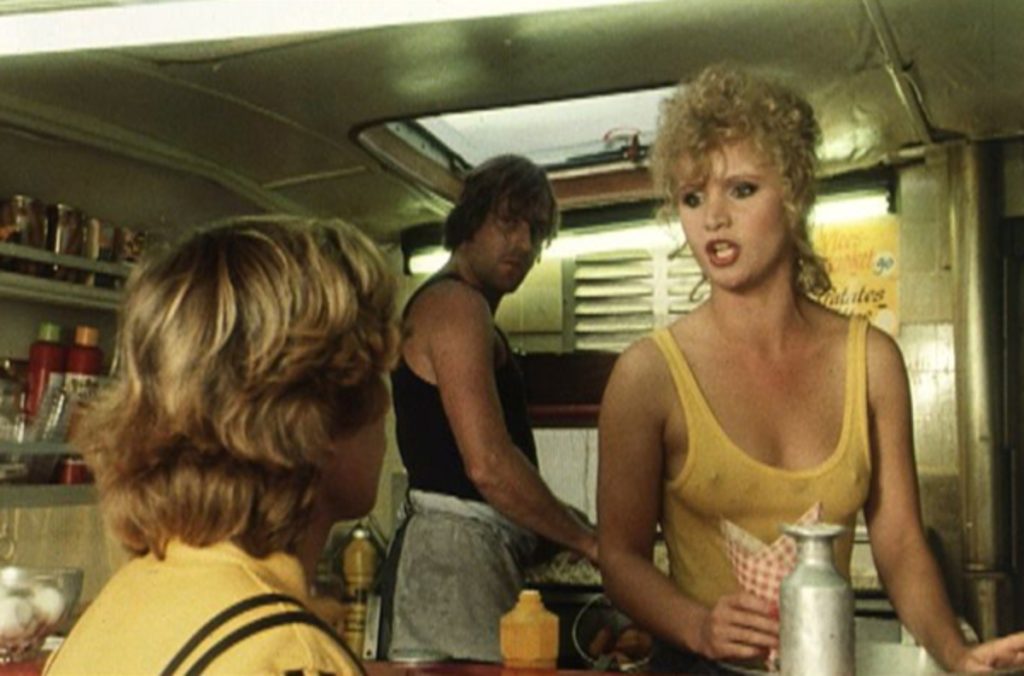 Renée Soutendijk, angry and hard at work in SPETTERS.

Fientje’s insertion into the spotlight comes as a saving grace to the film, if not to the guys.  As she’s looking to manage a motocrosser career or two, the guys continue down harsh paths of self-awakenings, and worse.  Before she comes along, their existence is simply a tide of boring machismo:  privileged boys in tracksuits rebelling against nothing, talking smack, and trying to be cool.

Forgive the crudity (this is Paul Verhoeven), but the dick measuring aspect of Spetters doesn’t stop at its depiction motocross lifestyle; it actually has an actual dick measuring contest.  Verhoeven, with this film, never shies away from an opportunity to depict male nudity, sometimes quite hands-on, or even more explicit.  He portrays a certain uneasy fascination with male homosexuality, complete with the violence that could, at least back then, regular accompany it, from both within the active lifestyle and from those outside of it.  Meanwhile, no female characters’ breasts go unshown.  Yet amid all of this, the would-be rampant sex of these young people is always depicted as illicit, and often impotent.

The inevitable crashing in of real life is what Spetters is about.  All the while, don’t expect there to be anyone to cheer for, or even like.  It’s all a lot of things that happens to a group of people that just happen to be out there, in the world. 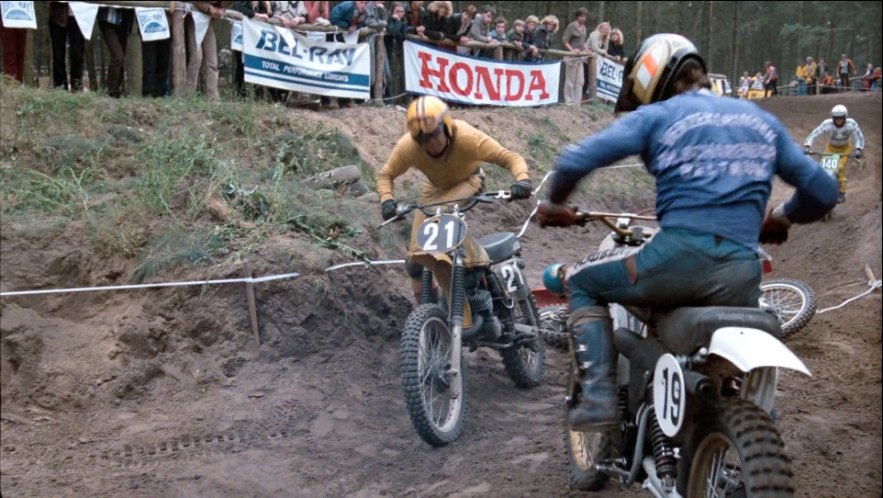 This central element is precisely what makes Spetters the weird anomaly that it is within the Paul Verhoeven canon.  Alongside of such deliberately over-the-top visions such as his American blockbusters RoboCop, Basic Instinct, Total Recall and Showgirls, and even his other foreign work, including the grizzly Flesh + Bone and the recent hit, Elle, this film stands out as a lone depiction of reality.  A very, very specific slice of hyper focused reality, yes (young motocross hotshots in 1980 Holland), but raw and “real world” dramatic, nonetheless.

In keeping with Verhoeven’s other work, however, is the amount of controversy Spetters attracted.  Although the director states on his Blu-ray audio commentary track that much of the attitudes on display in the film are indicative of the times, and would never pass muster today as sensibilities have evolved/changed, even then they were considered graphic and pushing the borders of audience tastes.  It is this confrontational graphic “reality” that, for better or worse, grants Spetters the majority of its impact.

Kino Lorber’s new Blu-ray of Spetters makes this important Dutch language entry (with English subtitles) in the Verhoeven back-catalog available to Western audiences at long last, in high definition and its unrated cut.  As always, Verhoeven serves up a casual, forthcoming, and conversational audio commentary track, which is the disc’s only noteworthy extra feature.  Sourced from a new 4K restoration, this release of Spetters likely looks better than it has since its theatrical run.

Tragedy, miserablism, Renée Soutendijk, and a co-starring role by Rutger Hauer are the primary takeaways of Spetters, a must for the Verhoeven completist; a bold, occasionally accomplished curiosity for other adventurous film buffs.