This review was written in 2003, a year or so following Criterion’s initial release of Wild Strawberries on DVD.   The company has since upgraded the release to high definition Blu-ray.  I share this in observation of Ingmar Bergman’s centennial in the current month of July 2018. 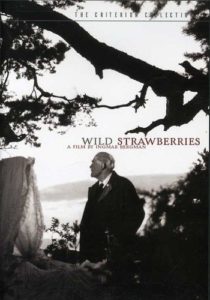 Ingmar Bergman’s Wild Strawberries (Smultronstället) is without question a brilliant film. In my brief acquaintance with Bergman’s illustrious and vast filmography, this is the most satisfying and most accessible entry that I’ve come across. Taking place during an old man’s twilight years (Professor Isak Borg, played wonderfully by early film director Victor Sjöström), he is given reason to re-evaluate himself and his current relationships when he begins having strange dreams evoking the past, death, and isolation.

The first dream is a cinematic marvel – Dr. Borg finds himself alone on a public street in daylight so blistering he can’t help but take immediate refuge in the limited shadows of empty archways and doorways. Everything has an eerie, overbearing whiteness about it, with the exception of the abyss-like shadow areas. Soon off-kilter objects such as clocks and watches without hands, and a crashed funeral carriage – with him in the coffin – begin popping up. It’s enough to send him back to the realm of the waking, albeit much too early in the day for his longtime maidservant, (Jullan Kindahl) whom he nonetheless insists cook breakfast for him.

Later in the day, Dr. Borg is to receive an honorary degree, and decides to make a day of traveling to the ceremony by car rather than by plane as previously planned. Accompanied by his daughter-in-law, Marianne (Ingrid Thulin), she quickly informs him that she and her husband (his son) regard him as a cold-hearted old man, and she goes on tell that her husband has become the same way. This direct rebuke comes not only as an awkward contrast to the honorary ceremony he’s heading for, but also as a figurative wake-up call. As Dr. Borg visits his past in fantasies, daydreams, and nightmares along the way, he is visited with emotional knowledge of his own reputation and existence while we the viewers are greeted with striking yet simple imagery and symbolism that would be equally at home today in a David Lynch film. 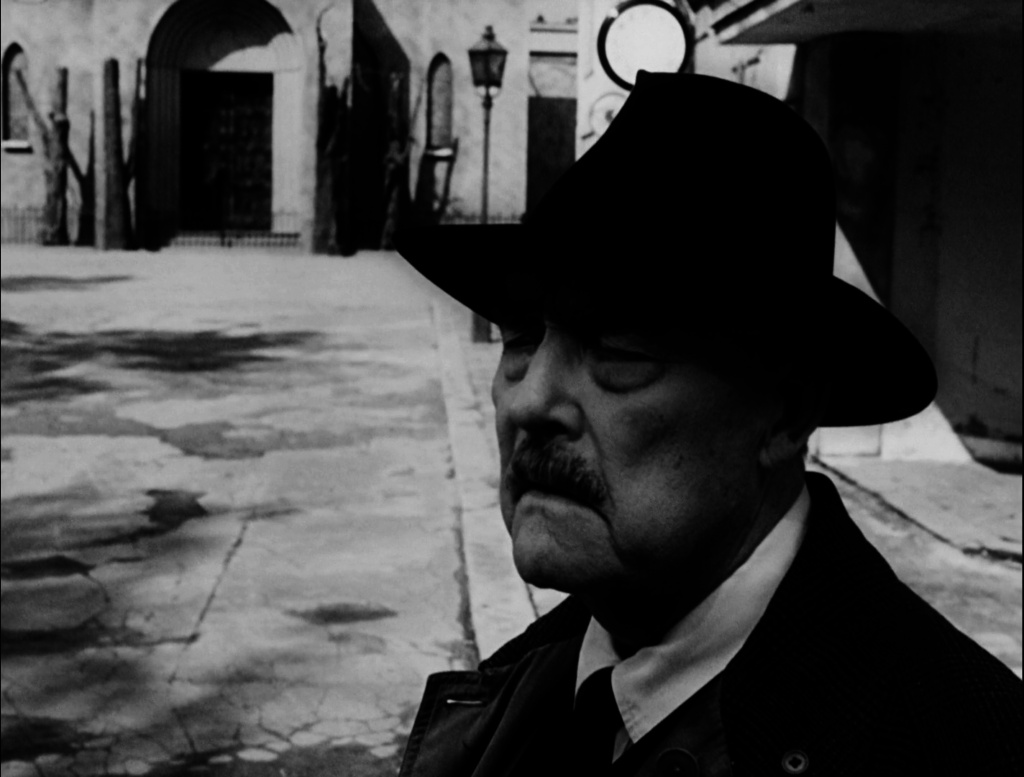 Wild Strawberries (the namesake which, film scholar Peter Cowie tells us, represent bright summer days and life itself in Swedish culture) surprisingly takes the form of an existential road film. During the relatively short day trip, Dr. Borg not only better develops his relationship with Marianne, but meets a number of important characters along the way. These other characters either reflect past acquaintances or turn up again in dreams. In either case, no one is as they are when encountered in real life. Everyone he encounters holds a personal significance to Borg, even the gas station attendant played relaxingly by Max von Sydow.

But, the professor is not the only one experiencing this sort of personal change in the course of this trip. When the traveling pair visit Borg’s decrepitly cold and death-like mother, Marianne experiences a revelation. In a scene beautifully played by Thulin, her character simply watches the interaction between the aging mother and son, and seems to realize that this family must have a long history of this behavior. Stranger is the character (characters?) of Sara, played by Bibi Andersson. Sara appears in two very different incarnations, one being an inaccessible beauty of the professor’s past, (at one point telling him, “You know so much and you don’t know anything”, a statement summing up many of us) and the other a flighty modern girl with a superficial admiration for him. Are they somehow the same character? It is never revealed, but the dual role adds another layer of intricacy to an already rich film. 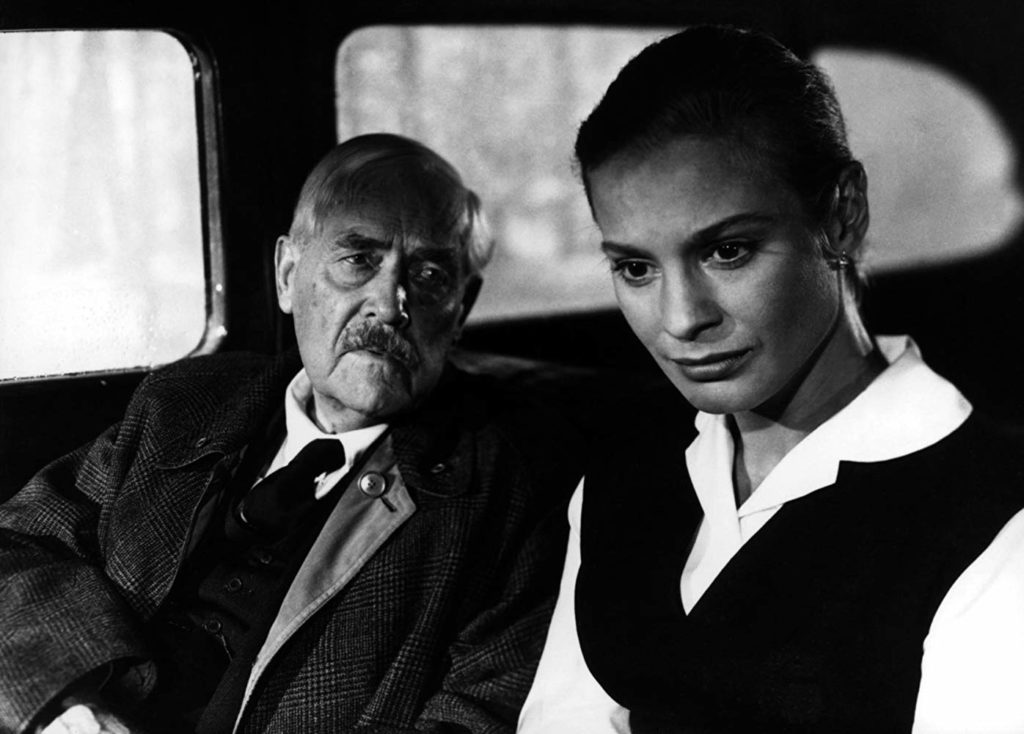 Although Bergman’s reputation for ponderous, stark meditation on the nature of life and (more evidently) death does not go unrealized here, the final outcome is a less dark one, and dare I say, surprisingly hopeful. I came to this expecting to be challenged and depressed by it, but came away challenged (most certainly) but also kind of uplifted. The text on the DVD package calls this Bergman’s “richest, most humane movie.” Based on the previously mentioned few other Bergman titles I’ve seen, I’d certainly agree. The fact that this came out in 1957, quite early in the writer/director’s continuing career, indicates a definite decline in quality of his personal worldview, as evidenced in his later work and interviews.

This spiritual journey is addressed in this film in the form of two strapping young men who compete for the affection of Sara (modern day version) by physically fighting over the existence of God, and the true nature of modern man. These characters and their bouts with one another seem ridiculous at first glance, but below the surface lies true indications of Bergman’s emerging outlook.  A film focusing on a character like Borg in his later years offers a rare cinematic perspective on life. About Schmidt could in some ways be called the Wild Strawberries of today. The fact that both films were made by younger directors early in their careers merely affirms that stories about aging are not just of interest to the old. 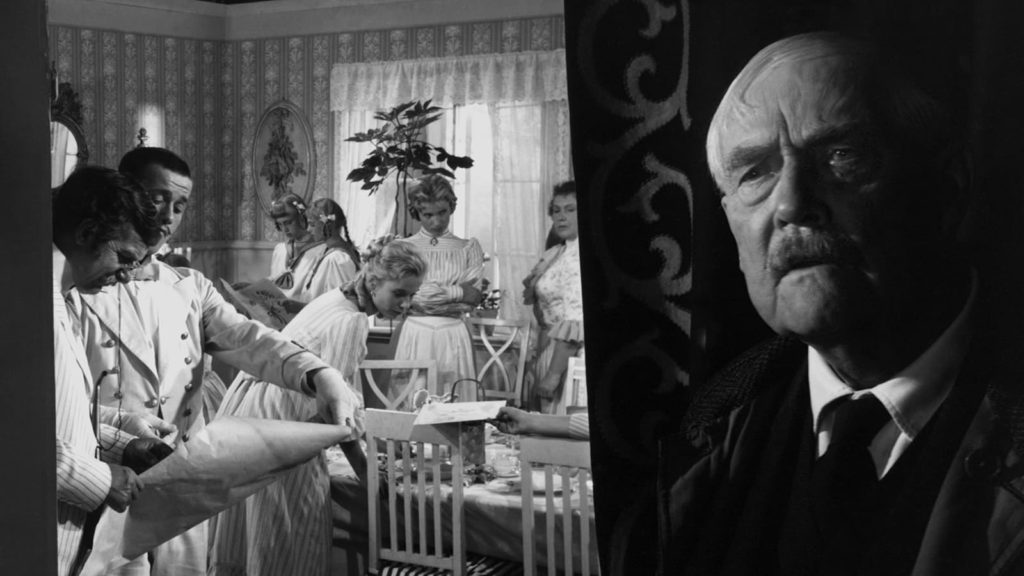 This film is a rare gem. It earns its comparison to the nightmarish surreal film work of David Lynch (I wouldn’t be surprised this film were an influence of his), but remains touching and wholly approachable for less art-house inclined viewers. This may be the ideal jumping-on point for the work of Bergman.

The DVD presents the film in a nearly flawless, beautiful black and white transfer. The Swedish mono audio track is clear and clean, and accompanied by white optional English subtitles. An eye-opening 1998 interview documentary with Bergman (Ingmar Bergman on Life and Work) that runs ninety minutes – almost the running time of the feature presentation – is included. Bergman is very open and honest about his beliefs, his career, and his life; just be sure to have some caffeine on hand, since it’s mainly just a sit-down chat, and also, the man was eighty years old when this was taped, and his age shows when he speaks. There is also a brief photo gallery, and a good commentary track by film scholar Peter Cowie, detailing the extreme autobiographical quality of the film, and Victor Sjostrom’s life and contributions.

Wild Strawberriesis recommended for film fans of all varieties.