HOW TO SUCCEED IN BUSINESS WITHOUT REALLY TRYING (1967) – DVD Review

How to Succeed Succeeds in it’s Business; not so Trying. 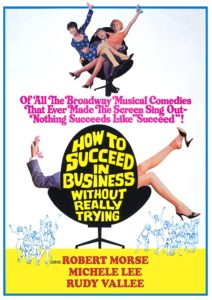 Oh, those studio films of the late 1960s! In the rapidly shifting zeitgeist of protest movements, the Summer of Love, and the rise the counterculture, the movie moguls had absolutely no ideas of what to do. Sentiment and melodrama was decidedly out, but God help ’em, they still didn’t know how not to make massive, lavish, overblown productions.

Case in point, 1967’s How to Succeed in Business Without Really Trying, is a likable and successful soulless product of this pre-Easy Rider age. With the color palate of vintage, faded Tupperware and one cavernous stagebound set after another, this is yet another massive and bombastic Broadway musical adaptation that Hollywood was apparently convinced that the public couldn’t get enough of. They couldn’t all be The Sound of Music, that proudly shining studio-saving city on a Swiss hill. But doggonit, why should that stop them from trying?

As a colorfully gaudy cultural curio that was likely already starting to look antiquated even then, How to Succeed in Business Without Really Trying is pretty good. The songs are decent, the pacing is okay, the extended cast is large, it’s got pretty funny writing, and Bob Fosse choreographs the dancing.

Actually, a correction: How to Succeed…, before it was ever a stage musical starring Robert Morse and Rudy Vallee, both of whom crossed over to also star in the film, it originated as a self-help satire book, written by Shepherd Mead, for the Hugh Hefner generation. In the musical/movie, Finch, a window washing peon with corporate aspirations (Morse), happens upon the book at a newsstand, and promptly begins following its sardonic and witty advice to a tee. 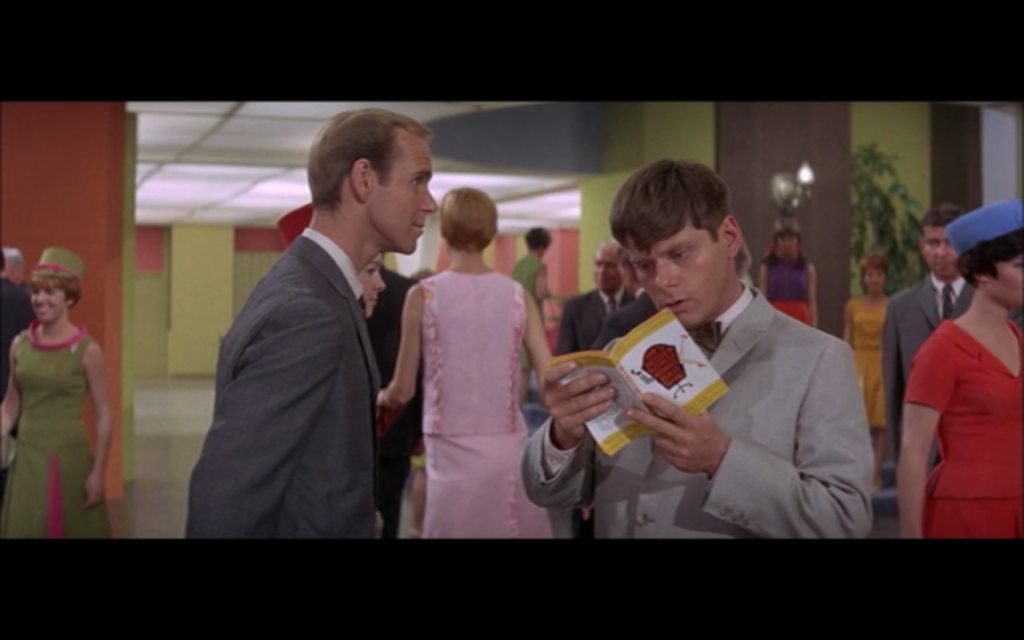 Before he knows it – or rather, perfectly within his accelerated expectations, Finch has advanced from the mail room to high on the company ladder, struck up a proper budding romantic interest with charmingly professional office secretary Rosemary (Michele Lee), began actively dodging the curvy temptation of his boss’ dingbat secretary, Hedy, with a secret (a funny Maureen Arthur), and performed a few musical numbers, to boot. All in a first morning’s work.

David Morse is ideal as Finch, an empty shell Everyman written and played to be relatable if not sympathetic. Short and sharp, Morse isn’t standard leading man material, at least as far as movies are concerned. But considering that he originated the part on stage, it is decent that he was brought over for the film. He brings a quirkball undercurrent to his character, unafraid to cock his head and get right in someone else’s face. He can sing and dance and wash windows, to boot. We might draw the line at actually rooting for him as he bounds effortlessly forward in this absurd white man’s world, but he’s plenty watchable. 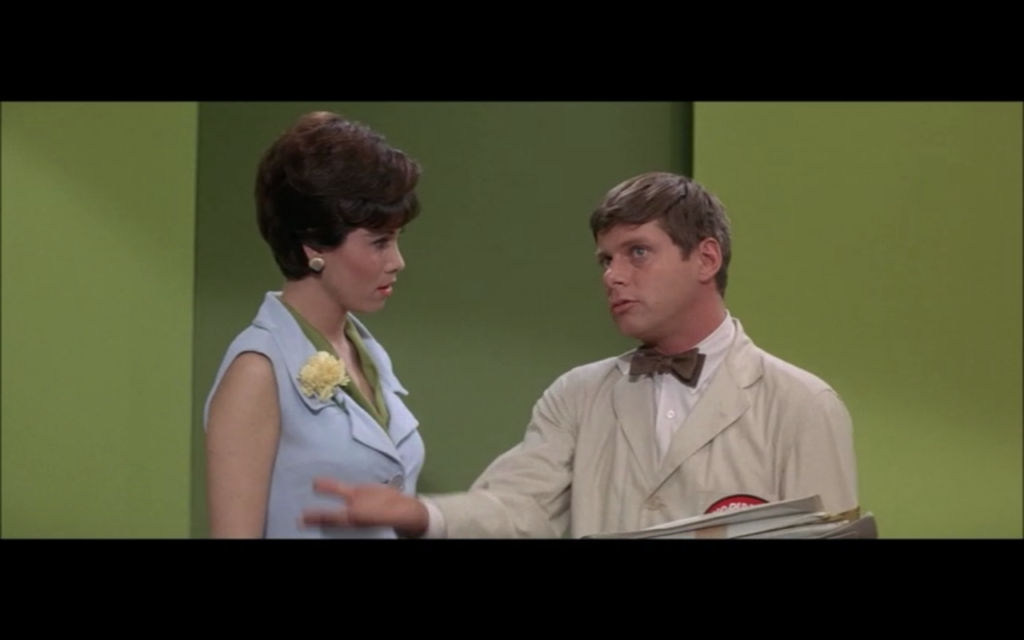 Rudy Vallee is a ton of fun as the blustery and absentminded boss of the Worldwide Wicket Corporation (whatever that is), J.B. Biggley. As the resident bigman windbag, he spends most of his time fretting about his employee nephew and overusing the word “damn”.

The most glaring thing about How to Succeed in Business Without Really Trying is how white and patriarchal it simply is. When they were making this movie, the notion that if a woman were working in an office, she’d of course be a secretary or some kind of clerk, was the accepted norm. Cast that assumption into a musical number/group routine built around the secretary pool doing makeup and wasting time at their desks, and it’s all the more blindly antiquated. The skirt chasing is overt and played for laughs, as a shunned man ends up muttering to himself that he needs to stop reading Playboy. The Hugh Hefner generation is already running into trouble in hemline paradise, but only for the sake of a limp punchline or two. It all makes one legitimately wonder how this attitude, so entrenched here, was handled for the big late 1990’s Broadway revival with Matthew Broderick. 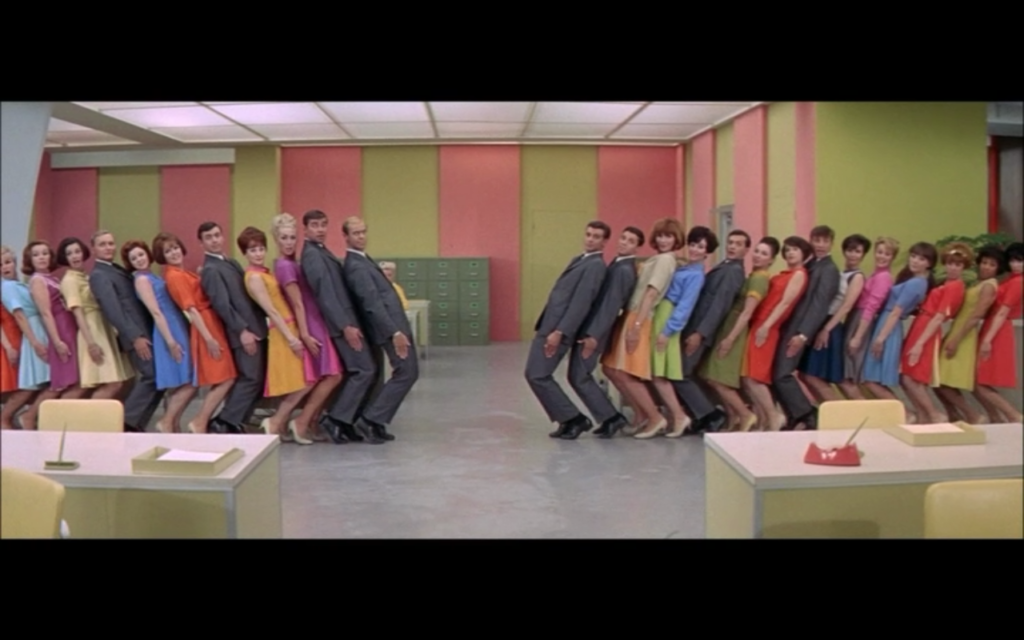 Anyhow, as a colorfully gaudy cultural curio that was likely already starting to look antiquated even then, How to Succeed in Business Without Really Trying is pretty good. The songs are decent, the pacing is okay, the extended cast is large, it’s got pretty funny writing, and Bob Fosse choreographs the dancing. All in all, this gaudy colored memorandum of a movie musical is a successful representation of that desperate era when movies weren’t sure what to become of who to play to. Unlike so many ballooned film productions of the time, it  seems to manage the business of spectacle without really trying.

Kino Lorber, in a slightly odd move, released How to Succeed in Business Without Really Trying, a movie begging for HD treatment if there ever was one, to standard definition DVD only. A quick look online reveals that that base has already been covered by Twilight Time, a competing boutique label, back in March. Sooooo… for anyone who’s simply not on board with all that high definition whooptidoo is in need of a decent quality DVD of this film in this day and age, look no further! No extras to speak of, but if you want to watch this film on your trusty old tube television, this is absolutely the way to go.

The images in this review are used only as a reference to the film and are not meant to reflect the actual picture quality of the Blu-ray.