As an artist I am always looking back in amazement at the efforts and achievements of the masters. I wonder at their technique and learn from their simple and consistent discipline. So I was thrilled, THRILLED, to see multiple art documentaries pop up recently as releases from the National Gallery Of Art. What a wonderful opportunity to see beautiful art and learn the back story behind many pieces that have influenced my own creative process. These short (30 minutes) documentaries are a great starting point for anyone with an interest in art appreciation. You receive a general overview of the world, art, history and industry of the time and how the story of each artist and their work relates to that time table. And all of this information is delivered by the comforting and reassuring voices of some of today’s most respected actors. Let’s start with the abstract surrealist from Catalonia Joan Miró. 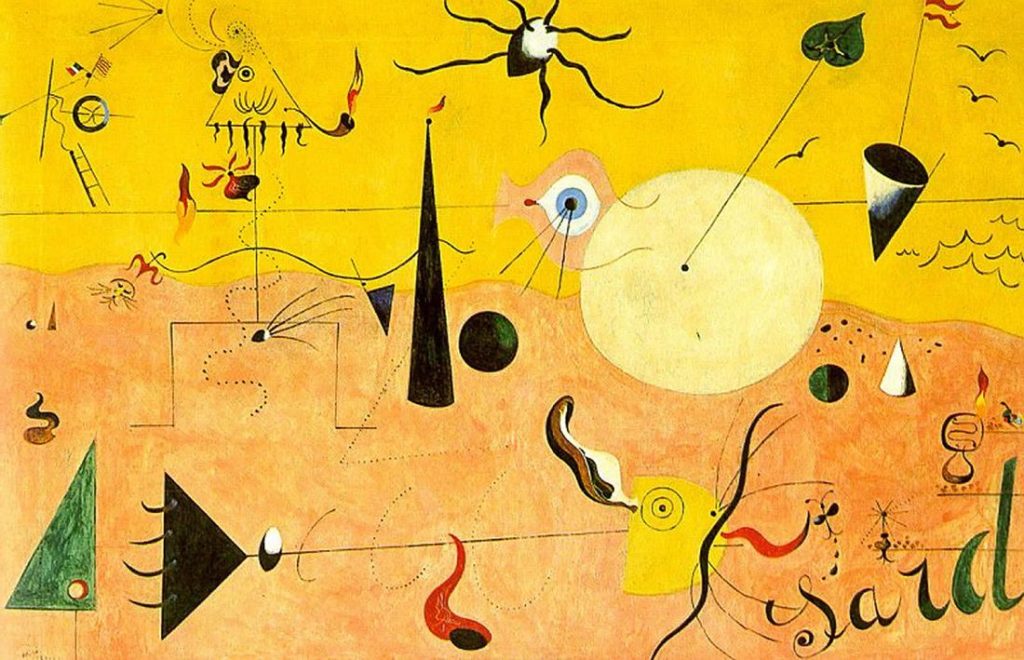 Joan Miró: The Ladder Of Escape 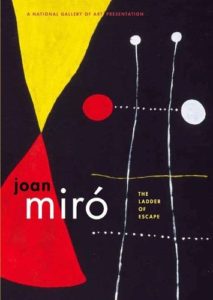 Influnced by Dada, Surrealism and Abstract Expressionism, Joan Miró’s art is a reflection of and escape from the horrible years he survived. He lived through the Spanish Civil War, World War II and the dictatorship of Franco. In Joan Miró: The Ladder Of Escape, narrator Ed Harris leads us through Miró’s early years in Catalonia as he combined nature paintings with cubism to his poetry driven Constellation Series during World War II and beyond. You get his full story and as you hear about his struggle, his art becomes much more accessible. Some of the main criticisms I hear in the modern wings of art museums are “I just don’t get it!” or “Why is this art? I could paint those squiggles on a canvas.” Watching a documentary like The Ladder Of Escape is so helpful because you see the art from the entire life span of Miró and you understand the story behind the works and the transformation in technique that takes shape over decades. An 80 year old Miró said this of his tryptych (Hope Of A Condemned Man I-II-III), “They took me a long time. Not to paint, but to think them through. It took an enormous effort on my part, a great inner tension to reach the emptiness I wanted. It was like preparing the celebration of a religious rite or entering a monastery.” 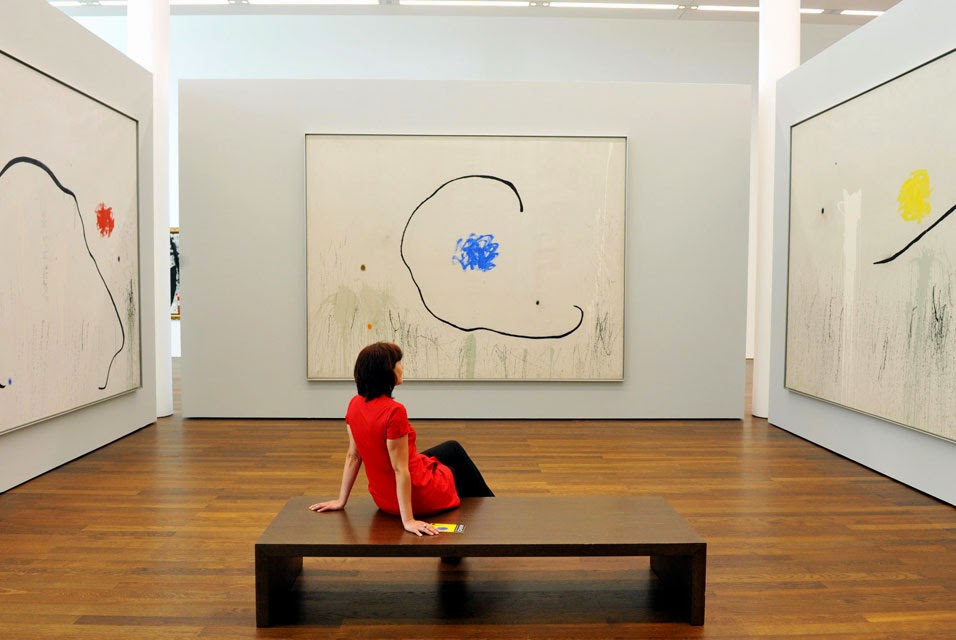 “Miró had broken free from nature and escaped into pure creativity!” 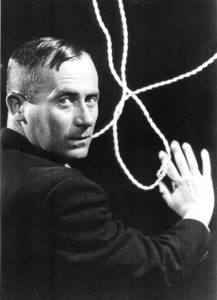 Art has many functions but it’s good to start with expression, perception and beauty. One of the best features of this documentary is a long view at Miró’s actual art. You get the chance to stare and get lost. These are pieces that you would need to travel the world to see but The Ladder Of Escape delivers them to your living room. In the extras, director Carroll Moore gives you panoramic views of Barcelona’s architecture and up close details of Miró’s squiggles, blobs and beasts. There’s even a section with each painting in the documentary listed with it’s name, date and location. These additions complete the documentary and make your creative mind wander. Wander to Miró’s Catalonia and long to retrace his time in Mont-Roig on the seaside. Follow his experimental time in Paris with the Dadaists and understand his empathy to anarchists and communist but refusal to join either party. And Marvel at his achievements in the arts during such a dark and oppressive century. 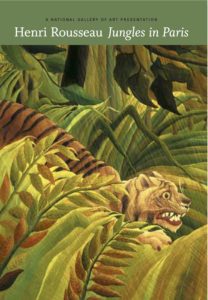 I have loved the self-taught Frenchman, Henri Rousseau for years and the fact that he took up painting at the age of 49 is proof that everyone should give art, in one of it’s various mediums, a shot. In Henri Rousseau: Jungles In Paris, director Carroll Moore shows us the unconventional path Rousseau took from poor customs clerk to the Avant-garde Salons of Paris. Rousseau wanted fame and recognition from respected artists of day but critics didn’t know what to do with his work. He’s not Avant-garde, Classical nor Naive in his technique or background and he lacked training and understanding of perspective, scale and basic rules of painting. But instead of shame, Rousseau embraced this oddness in his paintings and used it to his advantage. He painted scenes of relaxed Parisians in the park or on the sea shore. His work was altogether familiar and strange at the same time. He became fascinated with the exotic featured in contemporary Paul Gauguin’s work. Through his genuine love and curiosity of jungle life he accidentally stumbled across something the upper-class wanted and became a darling of the Avant-garde painters that he so admired.

“Nothing makes me so happy as to observe nature and to paint what I see. ”  Henri Rousseau 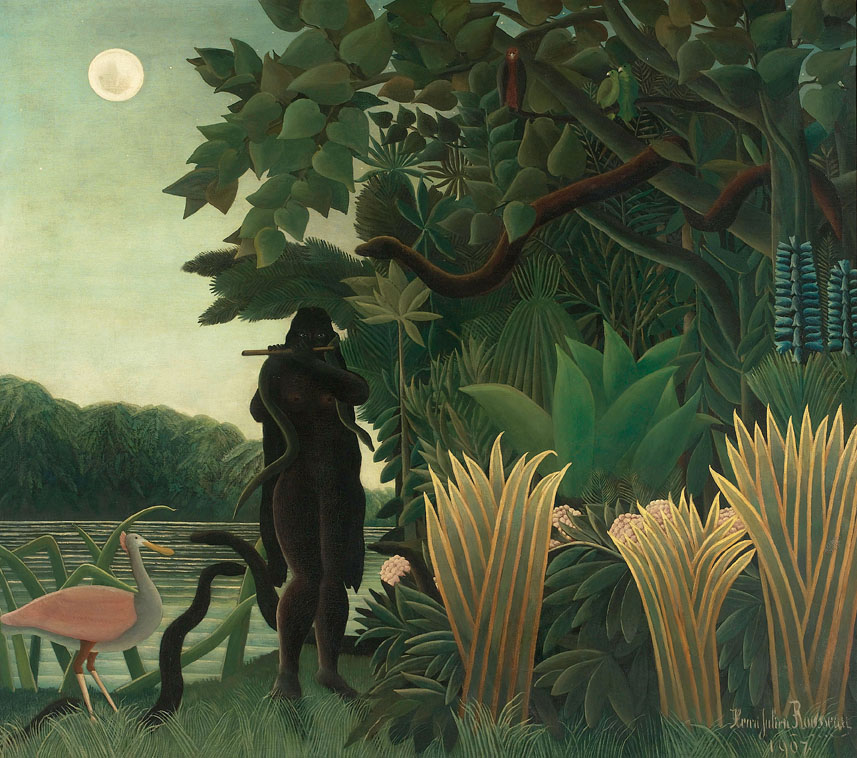 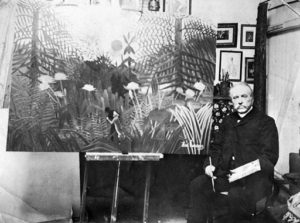 Rousseau At Work In His Studio

Rousseau’s whimsical style is paired perfectly with the always delightful Kevin Kline as narrator. They are a wonderful match and I imagine they would have been friends if given the possibility. Imagination is key to understanding Rousseau’s work. He painted these fantasies in the jungle while never leaving his native Paris. With the invention of moving pictures, locations once impossible became a part of the blue collar working man’s life in the city. So through film and study and frequent trips to the botanical gardens, Rousseau imagined this alien place with grass as tall as a man and jungle cats waiting to devour anything that crossed their paths. Jungles In Paris offers a beautiful look at Rousseau’s important works and gives the viewer insight into the man behind the surreal landscapes.

I highly recommend both of these DVD’s to any art lover, and if you happen to be a teacher or home school your children these would make excellent resources for your art curriculum. They are short, beautiful, informative and will encourage your own creative juices. Both Joan Miró: The Ladder Of Escape and Henri Rousseau: Jungles In Paris are available to purchase on DVD and they are available to stream on limited platforms.