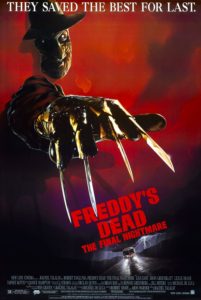 I saw A Nightmare on Elm Street in college, a couple of years after its theatrical release.  I wasn’t much of a fan of slasher movies, but I still preferred Freddy Krueger’s wisecracking serial killer to the dead pan personas of Michael Myers and Jason Voorhees.  I caught a few of the sequels over the ensuing decades – mostly when I came across them on late night television.  I am certainly not an expert on the series, but it seemed to me that some of the sequels took themselves too seriously.  That is not a charge that can be made against Freddy’s Dead:  The Final Nightmare.  The sixth and final film in the original series is like a Freddy Krueger and Loony Tunes mash up.  Director Rachel Talalay largely abandoned real scares and amped up the always-underlying silliness, and the resulting movie was critically panned.

I still don’t care.  It made me laugh. 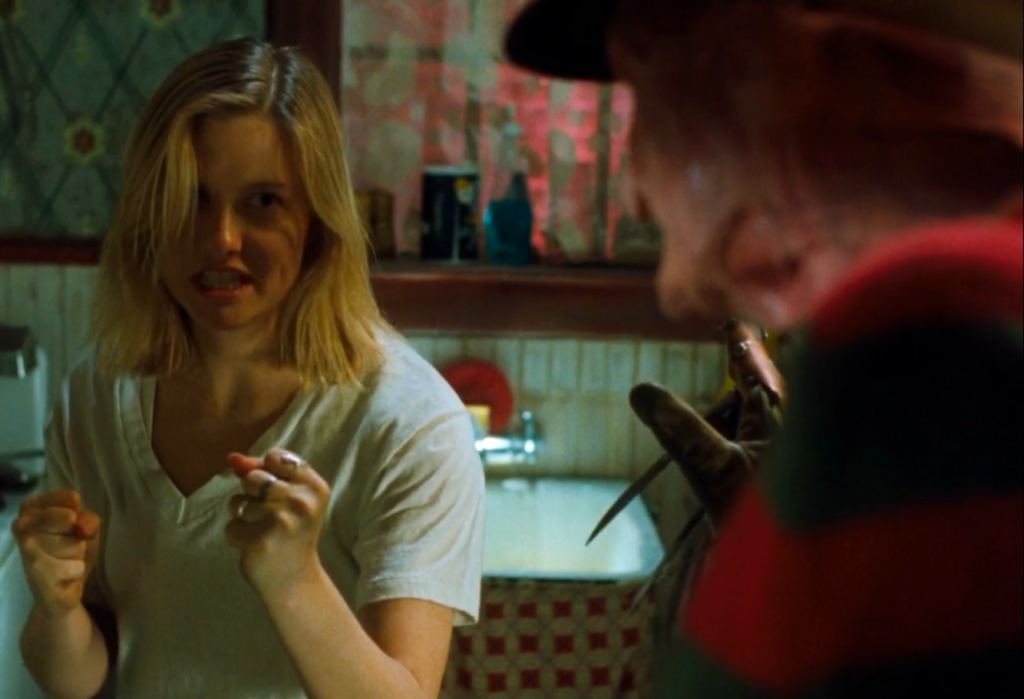 Robert Englund deserves every bit of credit he received for his work as Freddy Krueger.  His Freddy was a welcome reprieve from those faceless, robotic killers at the center of other slasher franchises.

Freddy’s Dead opens on the story of an amnesiac teen (Shon Greenblatt), the last child alive in Freddy Krueger’s hometown of Springwood, OH.  “John Doe” escapes Springwood and winds up in a home for troubled teens, where he becomes the patient of Maggie Burroughs (Lisa Zane), a young doctor who has been having some very strange dreams involving a little girl with pig tails.  When Maggie realizes that she and John are having the same dreams she decides a trip to Springwood is in order to try to unravel the mystery of John’s origins, and her unsettling nightmares.  Three other teens stowaway and make the trip, too:  Tracy (Lezlie Deane), a badass kick boxer who was sexually abused by her father; Carlos (Ricky Dean Logan), who was left deaf by his mother’s physical abuse; and Spencer (Breckin Meyer), a stoner and video game addict. 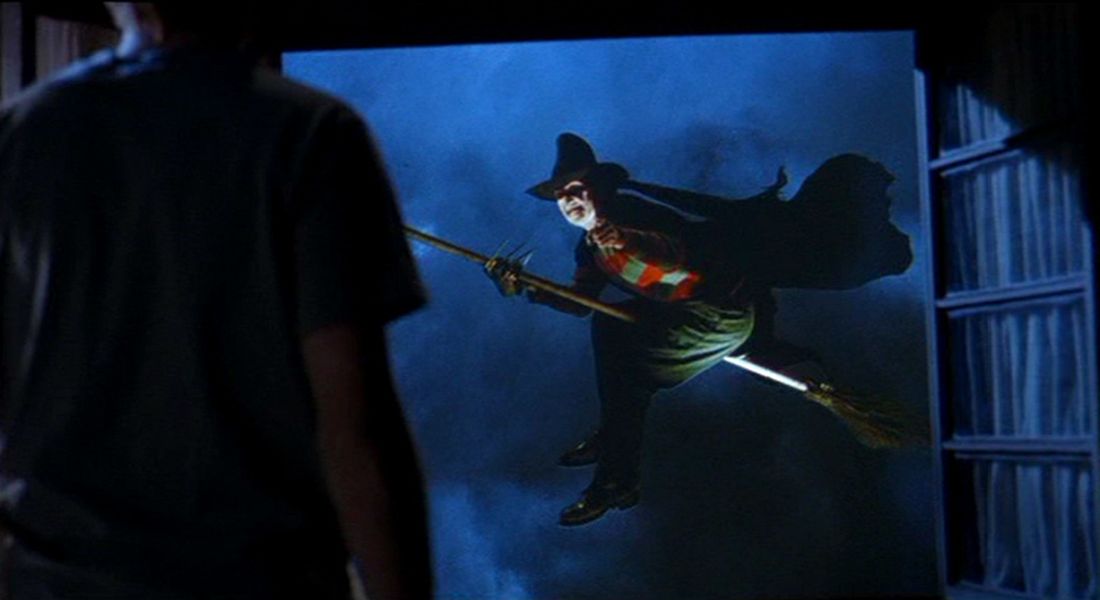 The trip to Springwood leads to new insights into Freddy’s personal history (Freddy was a husband and father!), and of course there are loads of dream sequences.  I particularly enjoyed Spencer’s dream in which he is pursued by Freddy through a Mario Bros. inspired video game.   Freddy’s Dead also includes cameos by the likes of Roseanne Barr, Johnny Depp (who died a spectacular dream death in the first movie in the series), and Alice Cooper, as Freddy’s abusive father.  There are, it should be noted, a lot of terrible parents in these movies.  Adults in the Elm Street universe are the worst.  Maggie is okay, though, as is “Doc” (Yaphet Kotto), Maggie’s colleague who has learned to control his dreams and comes up with a strategy for defeating Freddy.

Robert Englund deserves every bit of credit he received for his work as Freddy Krueger.  His Freddy was a welcome reprieve from those faceless, robotic killers at the center of other slasher franchises.  In Englund’s performances Freddy became unforgettable and…dare I say…almost likable?  Sure, he was as murderous lunatic who targeted children but he knew really knew how to deliver a cheesy one liner!  He gets ample opportunity to dispense those zingers in Freddy’s Dead, as well as to inflict and endure cartoonish violence.  His final undoing (spoiler!) is a stick of dynamite.  How much more Wile E. Coyote can you get? 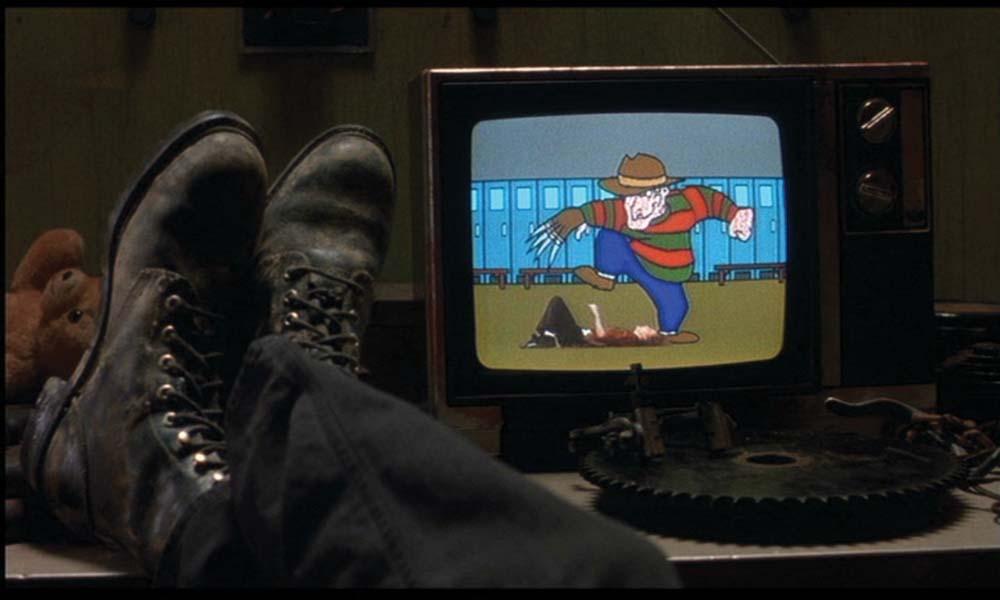 Oh, and this movie features 3-D for the last 20 minutes or so.  It’s not especially good 3-D, but it adds to the pulling-out-all-the-stops, closeout sale, everything-must-go tone of the movie.  Remember those terrible, wonderful, gimmicky William Castle horror movies like The Tingler and 13 Ghosts?  Freddy’s Dead seems about as serious and reverential toward its subject as those movies were, which is to say, not at all.

This was the last of the original Nightmare on Elm Street films, but Freddy didn’t exactly stay dead.  In 1994 the creator of the series returned with the very meta Wes Craven’s New Nightmare, followed several years later by Freddy vs. Jason, and most recently a 2010 series reboot casting Jackie Earle Haley as Freddy Krueger.  You can never really kill these guys off, after all; but no matter how good Haley was (I haven’t seen it, but Haley is a great actor so he gets the benefit of the doubt) he can’t ever displace Englund’s unique spot in horror history.

As for this movie, critics are in almost universal agreement that Freddy’s Dead:  The Final Nightmare is too silly, too comic.  The jokes are cheap, the plot all over the place, the 3-D hokey.  Yes?  And?  What were you expecting from number six in a series of slasher films being cranked out almost every year, featuring yet another unkillable psychopath?  In any case, I’m willing to be an outlier on this one.  I liked it.