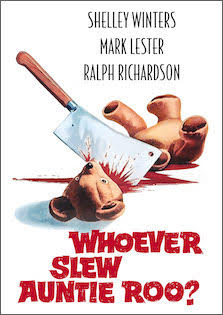 I knew there had to be a name for this genre, and so I went looking. Sure enough, 1971’s Whoever Slew Auntie Roo? is in a horror tradition formally called “Grand Dame Guignol” – or less politely, “Hag Horror”, “Hagsploitation” and “Psycho-biddy Horror”. It started with 1962’s Whatever Happened to Baby Jane?, a movie that earned Bette Davis an Oscar nomination playing one of the most garish, monstrous, past-her-prime women to ever grace the screen. Though, perhaps, “gracing” the screen is not the right way to describe that performance.  In any case, it was a doozy.

Whatever Happened to Baby Jane? (which also starred Joan Crawford) was a box office hit, and launched a stream of thrillers in which fading stars played women in peril, or perilous women – and occasionally, both. That last is true of Whoever Slew Aunti Roo?, in which Shelly Winters seems both predator and prey, depending on the scene.

After their young daughter, Katherine, died in a freak accident the husband disappeared and Auntie Roo was consumed with grief – the kind of grief that made her vulnerable to hucksters and mentally unstable, to boot. 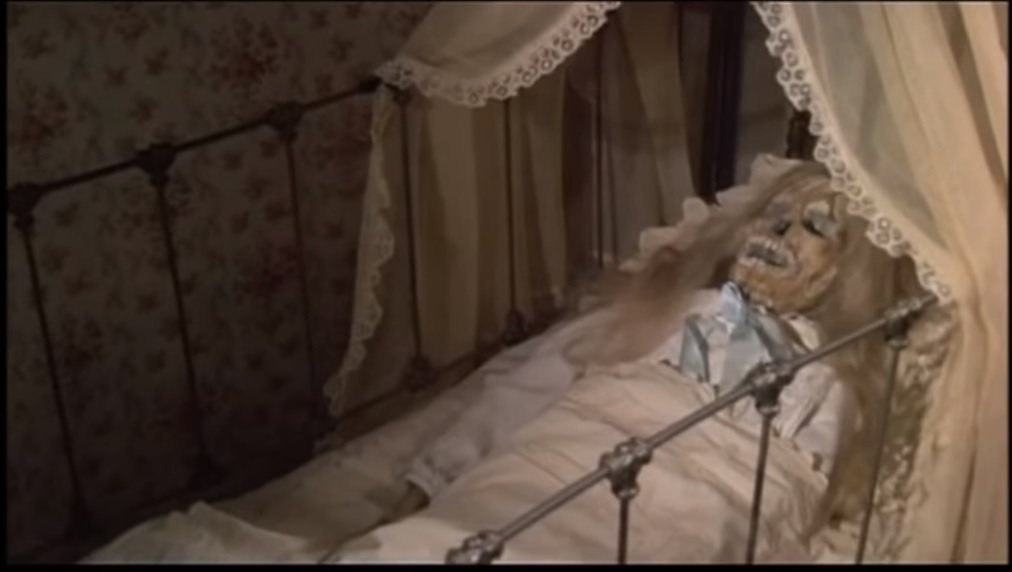 Auntie Roo (Winters) was a young American singer (of questionable talent, based on the one performance we see her give) who married an English magician and settled in his enormous mansion. After their young daughter, Katherine, died in a freak accident the husband disappeared and Auntie Roo was consumed with grief – the kind of grief that made her vulnerable to hucksters and mentally unstable, to boot.

And so the movie begins many years after Katherine’s death with Roo living in that big house, alone except for two domestic servants who are feeding off of her grief by aiding a “medium” (Ralph Richardson) and splitting the proceeds. The seances are rigged, of course, and the childish voice that Roo keeps hearing is not her daughter Katherine, but her wits are a little dulled by loss and guilt…and maybe she should have handled the death differently in the first place. Katherine was reported missing but Autie Roo knows right where the child’s body is: upstairs, in the nursery, rotting away as Auntie Roo sings lullabies to it every night.

That all sounds like the sort of florid, over the top business one expects in Grand Dame Guignol. But Auntie Roo is not all bad, actually, even if she’s a little crazy. She hosts a group of orphans in her home every Christmas and in the initial scenes of her welcoming them and lavishing them with sweets, she seems genuinely warm and kind. Unfortunately for brother and sister Christopher and Katie (Mark Lester and Chloe Franks), Katie reminds Auntie Roo of Katherine a bit too much, and Roo makes the decision that Katie will not be leaving the house with the rest of the orphans; or perhaps, ever. 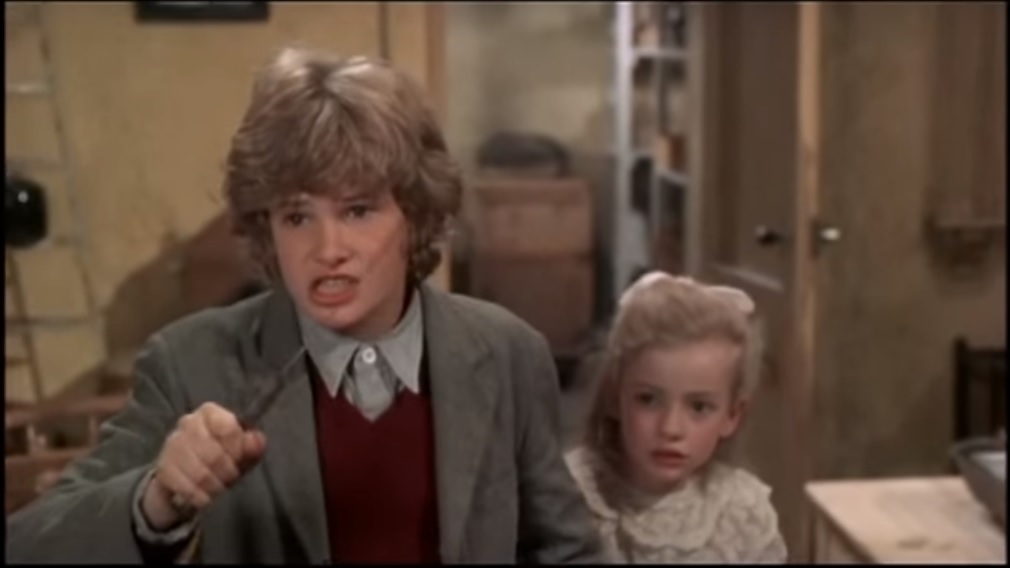 The rest of Whoever Slew Auntie Roo? is largely a battle between Auntie Roo and Christopher as he tries to escape from the “Gingerbread House” with his sister. “Gingerbread House” is the nickname the orphans have given the mansion, and it matters because Christopher reads the tale of Hansel and Gretel into Auntie Roo’s actions (and her frequently stated desire to fatten up the children), and believes that Roo is a witch who wants to eat them. The audience knows that Auntie Roo’s intentions are bad, but not quite that bad – making the poor, crazy women’s eventual comeuppance more morally complicated than you’d expect in a movie of this kind.

Whoever Slew Auntie Roo? is quite tame as horror films go (much less gruesome and frightening than the earlier Whatever Happened to Baby Jane?, for instance), but it’s an enjoyable psychological thriller. Shelly Winters always had a certain desperate, pleading, insecurity in her performances – and it certainly works here, as a woman who feels abandoned and is almost keening to love and be loved. Most of the movies in this genre draw on a certain cultural contempt for aging women, but here, at least, is one who is somewhat sympathetic.  Whoever Slew Auntie Roo also features terrific art direction by George Provis, making the Gingerbread House almost a character in its own right.