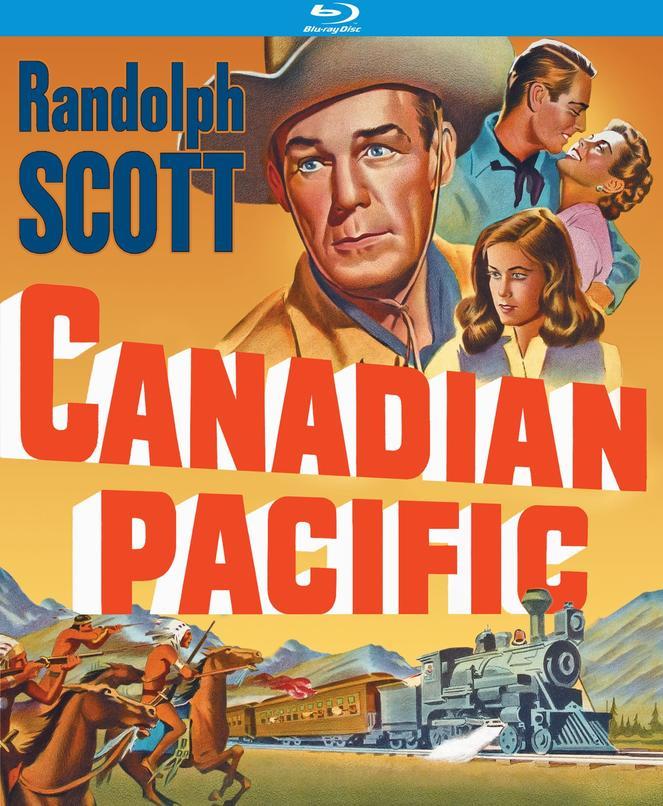 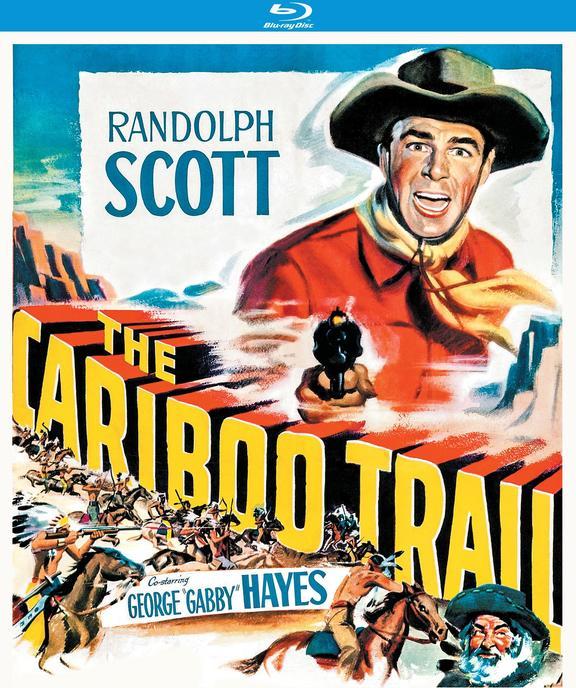 Here are two westerns that annex Canadian history into the great American myth of the expansion toward the Pacific. In Canadian Pacific, the money men want to draw a line made of steel from the Atlantic to the Pacific, but they’re stopped in their train tracks by those pesky Rocky Mountains. Enter tall, lean, square-jawed Randolph Scott, with a smile as easy as a punch, the only man who can find and map that elusive pass. He stands between the railroad company, the angry mob of settlers desperate to keep their claim on the open land, and the Native Americans who’ve amassed against them all. As with most frontier tales, the man in the middle faces environmental odds that parallel some version of romantic entanglement: rails will bring civilization, while a good woman will stamp out every violent impulse in the man of the west. 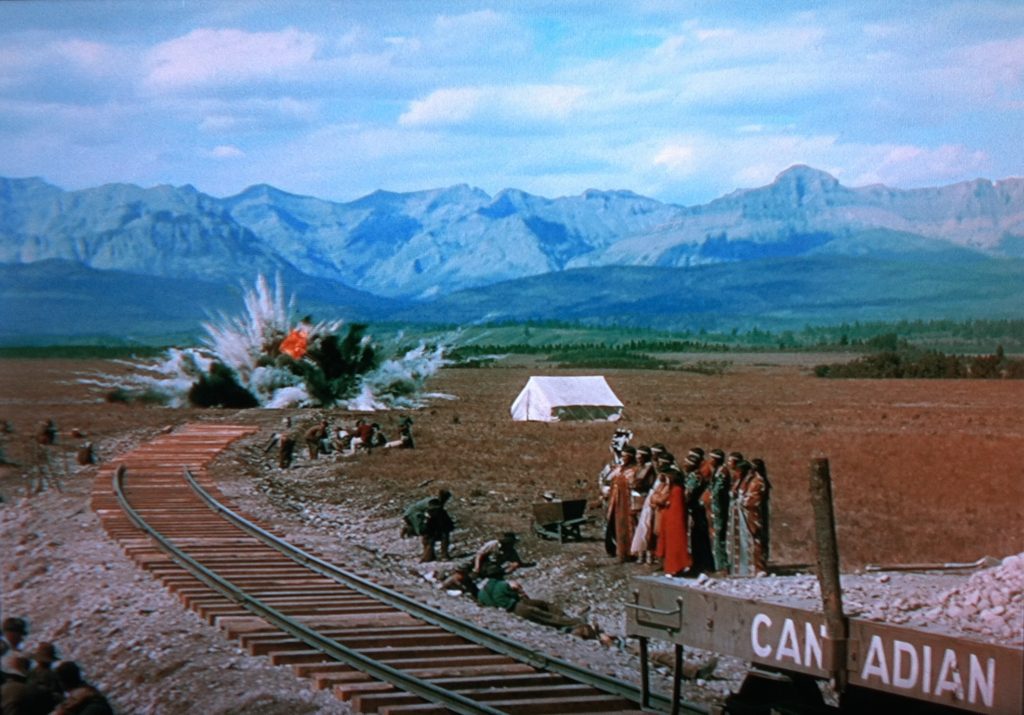 While Canadian Pacific at least purports to document history as a story superimposed over the actual cultural upheaval of the entrance of the railroad, The Cariboo Trail (produced the following year) is a much more standard western yarn, meandering its way out of the tried and true “cattle drive” story, perhaps an attempt to cash in on the success of Howard Hawks’ much more accomplished Red River (1948). Here Scott and pals have driven a herd of cows from Montana to British Columbia in hopes of establishing a ranch in the Chilcotin area. (Note: the Chilcotin River means, ahem, “red ochre river”.) But the nearby town and all the land is owned by a single man, Walsh, who blocks every move our hero makes. Add to the open land vs. development angle the complications of a recent gold rush in the area and the entrepreneurial ambitions of a female barkeep, and you’ve got a film with a lot of social-development ground to cover, and only 81 minutes to do it in. 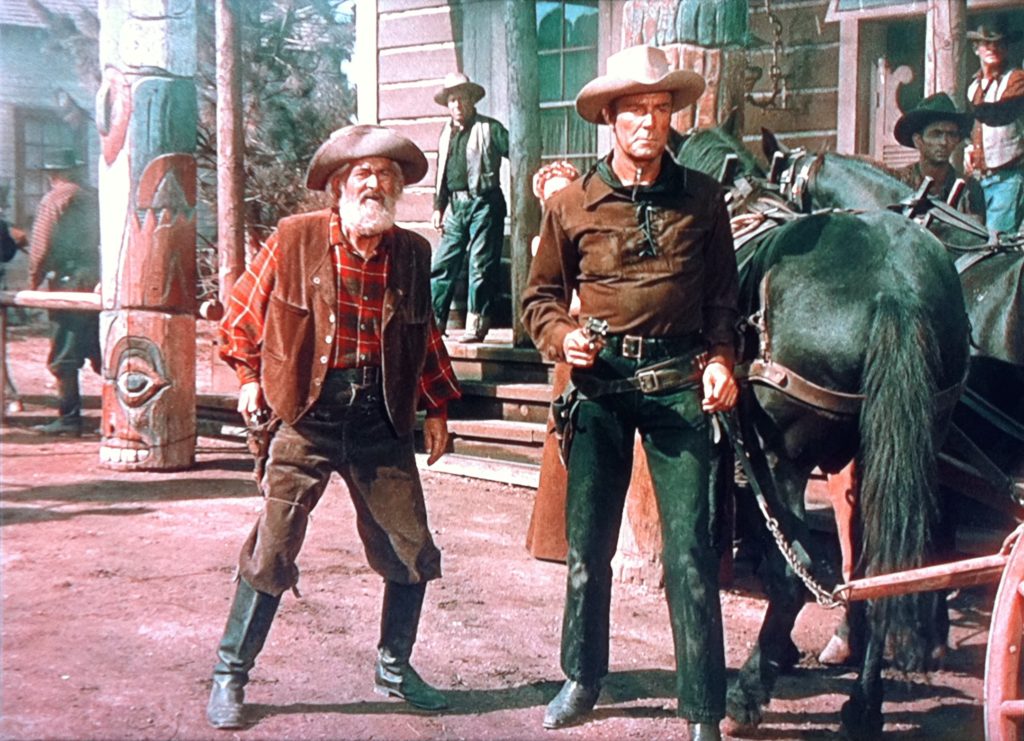 Neither film has the hermetically tight story structures of the series of Ranown films co-produced by Randolph Scott and Harry Brown in the later, darker-themed ’50s. Instead, the draw of these discs beyond their titles’ rightful fitting among the more modestly competent westerns of the era, is the fact that the two films have been restored to their original CineColor, a short-lived process that was the de facto alternative to Technicolor for independent producers. Then, almost as soon as the process became widely used, the fringe industry switched to a new Eastman Kodak process. So the CineColor machines, highly specialized to balance and combine two strips of color (an orange/cyan strip and a cyan/blue – a very limited range), were therefore quickly abandoned. This meant that any later printings of the films would have to pass through Eastman machines, which could not “dumb down” for the simpler two-color negatives. Many films were simply reverted to black and white, and this is how they were shown and remembered by generations of viewers. Now Kino Lorber is presenting the two films in a year-plus-long, meticulous restoration of the original color schemes as shot in 1949 and 1950, respectively. The result is a couple of films that look as close to the day Fred Jackman shot them as is humanly or digitally possible.

To think so many people saw these in black and white is to shudder the shudder of the film purist. When you see the organization of costume color to terrain, how all the outfits are color coded with each other, how they vibrate as they would in a catalogue collection, how the greens of a great Canadian forest leap out in contrast to the dirt and mud of a train track crew, then you begin to appreciate the labor that went into finding – in a worldwide search – every possible original piece of lost film. There’s a pleasant parallel to watching a movie depicting the struggles of men laying steel tracks foot-by-foot, or following hard-edged men pushing along a narrow cattle trail mile-by-mile, when you know the only reason you’re seeing it presented so beautifully is thanks to a team of men and women treating the thousands of feet of original film scene-by-scene, often frame-by-frame, thinking only of the fidelity of the end result in comparison to the original cultural artifact. 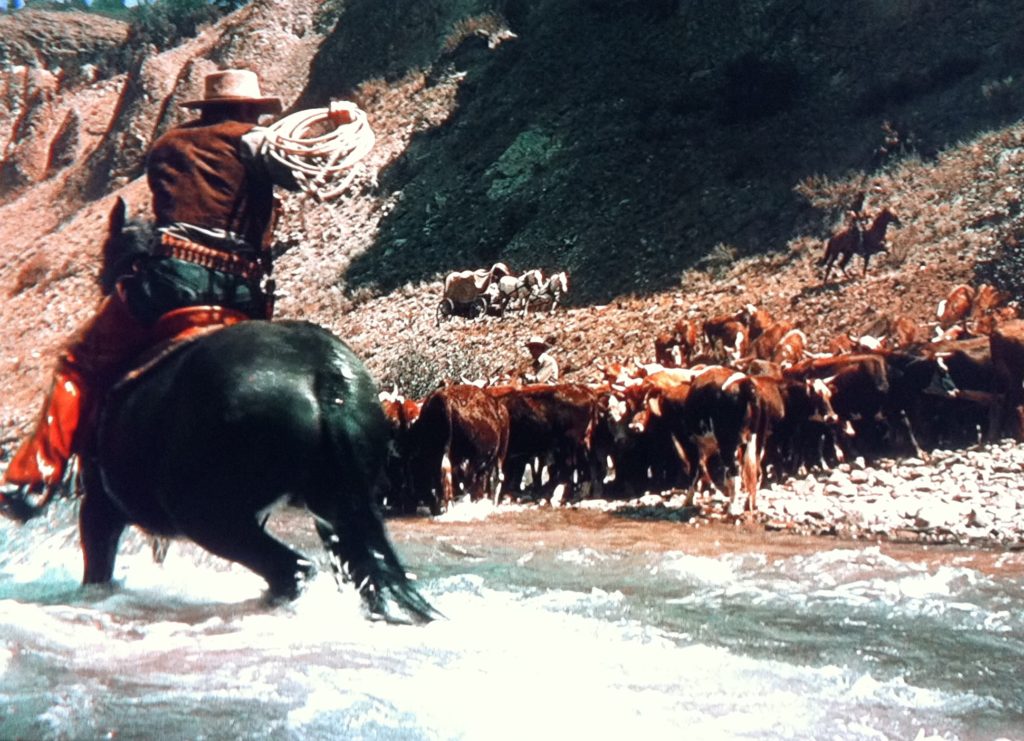 The documentaries included on each disc go a long way in unpacking the specifics of the arduous process. If only the steps in the struggle weren’t simply written out for us – the information is presented in typed-out paragraphs over images of, say, film being passed through the reels of a Steenbeck editing machine. We need a narrator. That much tolerated, though, we at least have a generous series of side-by-side comparisons of picture and sound from the warped and near-destroyed originals to the downright miraculous rescued version. Knowing what went into the restoration provides a sense of awe to the movies that were only there implicitly in the stories. In fact, the story of the films’ rescue is sometimes more captivating than the movies themselves, lending import to what was already a fine afternoon spent in the old west.

The images in this review are definitely not representative of the actual Blu-ray’s image quality, and are included only to represent the film itself.