Shannon And Spacey Bring The Fireworks To An Otherwise Tepid Comedy

The photo is famous; the story behind it, less so. In her new film Elvis and Nixon, director Liza Johnson tries to 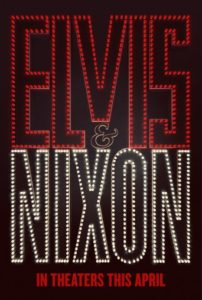 bring to life that famous handshake, the meeting of two giant, paranoid, obsessive egos. With the leads played by two acting powerhouses (Michael Shannon as Elvis and Kevin Spacey as Richard Nixon), it seems like a can’t-miss movie concept. That it falls short of the goal is certainly not the fault of either Shannon or Spacey. The story is meandering, bu it has considerable pleasures when Elvis and Nixon share the screen.

The short, strange and true tale is this: In December of 1970, Elvis Presley became convinced that he needed a badge from the federal Bureau of Narcotics and Dangerous Drugs. So he flew to Washington, wrote a letter to President Nixon offering his services to the government and requesting a meeting, and dropped it off at the front gate of the White House. It took some work from Nixon aide Egil “Bud” Krogh to convince the reluctant Nixon to meet the King of Rock and Roll, but it happened before the day was out. The photo was taken, gifts were given all around, and Elvis even got his Narc badge.

It’s a crazy story, and when it comes to the details of the meeting, Elvis and Nixon doesn’t need to embellish the facts to craft a comedy.

The problem is that much of the film feels like unnecessary build up to what we really want to see: those iconic but incongruous figures not only meeting but carrying on a subtle battle for primacy. Oddly, the central character in the story is neither Elvis or Nixon, but Elvis’ friend Jerry Schilling (Alex Pettyfer) who traveled to Washington with him. Pettyfer seems like the wrong casting choice. He’s far too youthful, clean cut and bland to be believable as a long time member of Elvis’ entourage. As for the time consuming subplot (Will Jerry make it home in time for dinner with his girlfriend and her parents?), who cares? Johnny Knoxville, as Elvis’ dim bodyguard, Sonny, is more plausible if not more interesting. After a vibrant opening sequence, much of the film felt like a slog.

Shannon himself doesn’t look like the real Elvis (he certainly lacks midlife Elvis’ fading beauty) but he has a certain unsettling, off-kilter charisma that seems about right for Elvis, circa 1970 – increasingly isolated by his stardom and looking for things that money can’t buy, including an appointment as a “federal agent at large”.

Nixon has his own entourage of staffers and underlings, but Colin Hanks (always good) is a standout as Krogh who, having carefully calibrated every detail of the meeting, helplessly watches his plan fall apart.

As for Spacey’s work as Nixon, it’s superb: not an impersonation of the former president, but a re-imagining that is embodied down to the tiniest detail. He is grumpy, snarling, shrugging as if he’s trying to shed his own skin. He is coerced into meeting Elvis, but then finds a kindred spirit (they bond in part over their mutual contempt for The Beatles). Watching Nixon’s eyes light up with surprise and amusement in Elvis’s presence is a genuine delight.

Shannon and Spacey spark together, and are supremely watchable. I only wish there had been less filler, and more time to see these two greats playing off of each other. 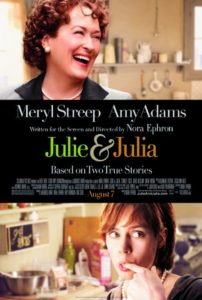 In another movie based on a actual events, Amy Adams plays Julie Powell, a blogger who took on the challenge to prepare every dish in Julia Child’s’ “Mastering the Art of French Cooking” in one year. That might be a pretty stale account, if not for the parallel story of Child’s own journey to becoming a famous chef. Child is played with exuberance with Meryl Streep, and Stanley Tucci is her doting husband, Paul. In fact, the finest ingredient in this movie is its depiction of deep, devoted marital love between an unlikely pair.