Love in Defiance of Politics and Tradition 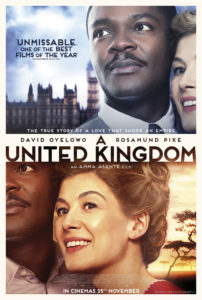 When history is taught well it’s not simply about names and dates, not even about borders, wars, treaties and industries.  History is at its most compelling when personal stories are placed in the context of larger movements; in fact, when we learn that those larger movement are made up of and driven by personal narratives.  There are always more of those stories to be told, and the film industry has been an especially rich purveyor of those stories in recent years (see Academy Award nominees Loving and Hidden Figures, for example).  Director Amma Asante’s well received 2013 film Belle tapped into this stream of untold histories, and she’s succeeded again with A United Kingdom.

Before Botswana was a democratic republic it was, Bechuanaland, a British protectorate; and its Bamangwato people were led by a line of chiefs from the Khama family.  The last of those chiefs, Seretse Khama caused political upheaval both in Bechuanaland and England through his marriage.  In A United Kingdom Asante dramatizes the love story between Khama and a white Englishwoman, Ruth Williams.  Khama (David Oyelowo) and Williams (Rosamund  Pike)  met in 1947, while Khama was attending law school in London, and married a year later.   There were no laws against interracial marriage in England, but there were plenty of political pressures applied to the couple, both by the British government and those in Khama’s tribe who resented the notion of Williams serving as their queen.

A United Kingdom has an opening act in which Khama and Williams meet, fall in love, and marry while in England.  It’s the film’s weakest piece, simply because the falling-in-love story is  rushed through to get to the political and dramatic heart of the film.  The couple meet at a dance and make an immediate connection, sharing a  love of jazz and a sense of adventure.  Except for one encounter on the street and opposition to the marriage by Ruth’s father, A United Kingdom gives us little information about the racial climate in post-war England.   That’s less of a deficit than the superficial treatment of the relationship’s beginning, though.   Their love for each other feels more contrived for the screen than authentic until well into the second act of the film.

I briefly found myself wondering if the marriage wasn’t, in fact, a bad idea.  This impetuous love affair threatened the political stability of an entire nation:  was that justified by a shared love for Tommy Dorsey? 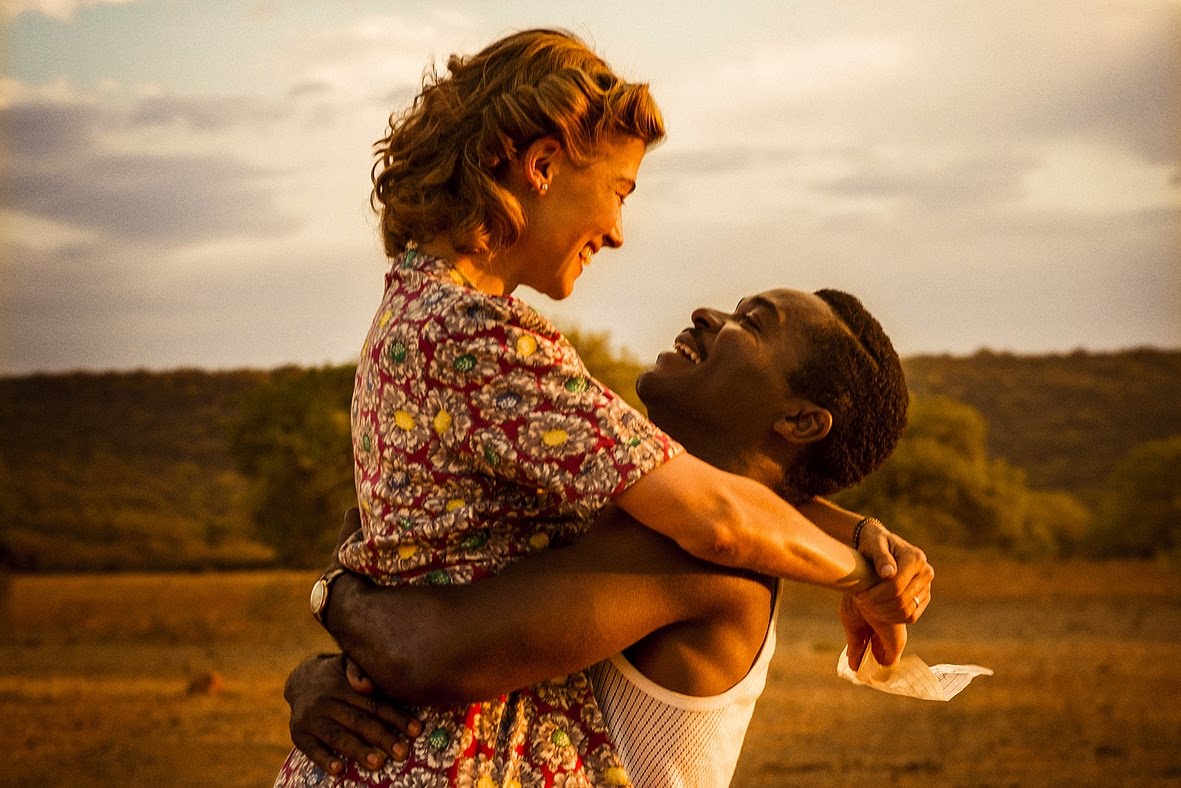 That second act,  in which the Khamas try to preserve their marriage in the face of relentless pressure, is compelling and redeems the weakness of the opening.  It seems as if everyone is opposed to this union; not just Ruth’s family, but Seretse’s uncle who served as regent while Seretse was being educated, the older and more traditional members of the Bamangwato tribe, the English government, the Anglican Church, and the government of South Africa, whose prime minister described the marriage as “nauseating”.  Because the foundation  of the relationship between Ruth and Seretse was not well established early in the film, I found myself briefly wondering if it wasn’t, in fact, a bad idea.  This impetuous love affair threatened the political stability of an entire nation:  was that justified by a shared love for Tommy Dorsey?

Of course, there was far more to the love between Ruth Williams and Seretse Khama than their taste in music, and Asante allows the depth of their commitment to slowly reveal itself over time.  Their marriage not only survived, but took on greater meaning in the global movement away from colonialism and racial segregation.   Seretse Khama did not, in fact, reign as chief of his people.  Instead, he became the country’s first democratically elected president after Botswana gained independence in 1966.

As Ruth, Rosamund Pike communicates warmth and sensitivity but has an inner toughness that wins the grudging admiration both of the Bamangwato people and the British civil servants who surround her.  David Oyelowo is a powerhouse as Seretse:  he is given the most dramatic speech in the film, appealing to this tribe to accept his marriage as a way of rising above race-based inequality.  Oyelowo is a physically compact actor with an outsized power onscreen.  His Seretse dominates those around him even when subjected to petty humiliations by the British government’s agents (Tom Felton and Jack Davenport).

A United Kingdom is adapted from Susan’s Williams’ book, “Color Bar:  The Triumph of Seretse Khama and His Nation”.  Asante has altered actual events enough to tighten the drama and make the lines between good and evil sharper (a good reminder that having “seen the movie” is not synonymous with knowing the history).  The film’s storytelling is conventional, but the visuals are stunning, particularly in Africa.  Seretse mentions early in the film that Bechuanaland was a poor country, but it rarely shown as bleak or desperate.  The red-hued, sun soaked landscape is beautiful, letting audiences see the country with the affection the Khamas felt for their home.