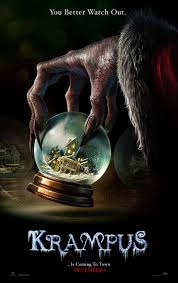 Some movies are easily classified from their marketing campaigns. Family movie, rom-com, social advocacy film…you know what you’re getting into. Krampus has been a bit harder to read from the trailers and commercials. Is it appropriate for children? Is it really a horror film? What’s up with that heavy-hitting cast in a low profile holiday movie?

Well, I’ve seen Krampus now and I’m still trying to figure out just who this film was made for.  Director Michael Dougherty doesn’t seem to know quite what he’s going for tonally.  It’s as if classic Christmas films and folklore were thrown in a blender with some eggnog and a few 80s horror movies, and this pastiche is what came out.  There is nothing really original about Krampus. Some of it’s elements are, in fact, shockingly derivative. But it’s also not without its pleasures, mostly related to a stellar cast and a handful of scary/kitschy creatures.

I’m going to cut to the chase and suggest who I think should and shouldn’t see this movie.

Don’t see Krampus if you are a child.
Despite the fact that the central character is a young boy, Krampus is “adult” enough to merit its PG-13 rating. Classic toys come to life in horrifying ways, and everyone is in peril – even the baby and the dog. There’s also quite a lot of profanity, which may surprise parents who expect a more family-friendly scary comedy.

Krampus exists in that weird twilight space of films featuring lots of children that are not appropriate for children themselves to see.

Don’t see Krampus if you are a serious horror fan.
It may be too much for young children, but Krampus is not actually that scary. There are several jump scares, but the creatures that attack the family seem more jokey than genuinely frightening (particularly vicious gingerbread cookies and a voracious jack in the box). Anyone hoping to see some quality gore or deeply disturbing material will be disappointed.

Don’t see Krampus if you are looking for lots of laughs
Perhaps you saw Shaun of the Dead or What We Do in the Shadows, and you are looking for another brilliantly funny horror comedy. Well…this is not it. Krampus has humor, but much of it is blandly sitcom in tone. The first third of the film is a dysfunctional family comedy, and most of the jokes seem tired even within that tired genre.  There is a bit of black comedy around the creatures (ala Joe Dante’sGremlins or Small Soldiers), and the gingerbread cookies illustrate how Shrek might have gone in a much darker direction.

Don’t see Krampus if you are someone who loves the book The Polar Express.
Remember the bit about the boy asking for a bell from a reindeer’s harness? And then he loses it, but finds it wrapped under his tree on Christmas morning? And it becomes a symbol of childhood innocence and belief? Remember all of that?  Krampus is going to ruin it for you.

On the other hand…

See Krampus if you are interested in the dark side of Christmas lore.
I remember hearing about the Krampus character when I was a little girl, after some relatives spent a Christmas in Austria. The notion of a horned, hoofed, Christmas demon who accompanies St. Nicholas and looks for naughty children to beat seemed, shall we say, antithetical to the Christmas spirit. Since then, however, I’ve learned that there are a wide variety of strange and monstrous figures in Christmas lore, including Iceland’s Christmas Cat, who eats lazy children; France’s Pére Fouettard (translation: Father Whipper), who likes his naughty children salted and cured; and Germany’s blackface-wearing Zwarte Piet, Santa’s (relatively benign) slave who helps pass out sweets. There are also other figures like Krampus who serve Santa just by looking to give out beatings (Belsnickel and Knecht Ruprecht are in this category), or by leaving rotten potatoes in your shoes (Iceland’s Yule Lads). If you feel that cinema has neglected the nightmare-inducing side of Christmas mythology, Krampus is a promising start. Perhaps next year we can get a horror movie about the German Christmas witch Frau Perchta, who rewards good children, but tears out the internal organs of the naughty and fills their abdominal cavities with garbage.

Mull that over for a moment before you pick up your next Christmas cookie. Krampus may serve some valid purpose in pointing out that our sugar coated vision of this holiday season is a relatively receent phenomenon. 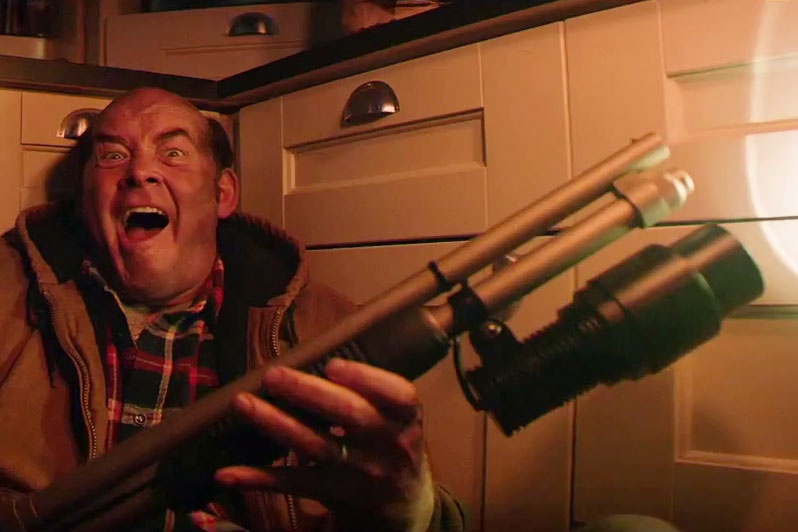 See Krampus if you think cinema needs more characters like Randy Quaid’s Cousin Eddie in National Lampoon’s Christmas Vacation…
because that’s essentially who David Koechner is playing in Krampus. Did I mention that Krampus steals freely from previous Christmas classics?Christmas Vacation’s redneck relatives were particularly ripe for poaching, but Home Alone’s wish to be family-free has also been transferred directly to Krampus’s Max (Emjay Anthony). It becomes a bit distracting, trying to spot all of plot elements from other movies. I won’t spoil the movie’s ending plot twist, but it, too, has been around the block before.

See Krampus if the cast list attracted you to the movie.
See it if you miss Adam Scott on Parks and Rec, or if you are a completist about seeing Toni Collette in her many anxious mother roles, or if you think David Koechner is funny even if his role is a ripoff. Above all, see it if you are a Fargo, Season 1, fan and were thrilled just to see the wonderful Allison Tolman in the trailers. Krampus really does have a fine cast, and they make the most of what is a not-terribly-scary, not-terribly-funny, not-sure-of-its-own-sentimentality genre mashup.  It’s not the cinematic equivalent of a new bicycle under the tree, but then again…it’s not a lump of coal or a beating from Krampus, either.