The Un-Shivering Timbers Of A Staunchly Built Classic 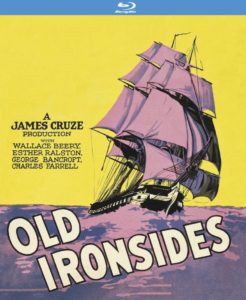 “To the shores of Tripoli” may be a familiar lyric to many American viewers, as may be the nickname for the legendary USS Constitution, “Old Ironsides”, but fewer might know the battles set on those shores or missions sailed on that vessel. No matter! The 1926 naval historical epic Old Ironsides, helmed by James Cruze (1923’s The Covered Wagon), presupposes no further knowledge of early US maritime history than its license to fictionalize its seafaring participants or to mythologize its main-sailing events. Released by Paramount Pictures and starring Wallace Beery, George Bancroft, Charles Farrell, and Esther Ralston, the Constitution’s better-known name of Old Ironsides, derived from the armor-like Pennsylvania Oak of its construction, sails as a Hollywood floating barge spectacle of equal sturdiness. 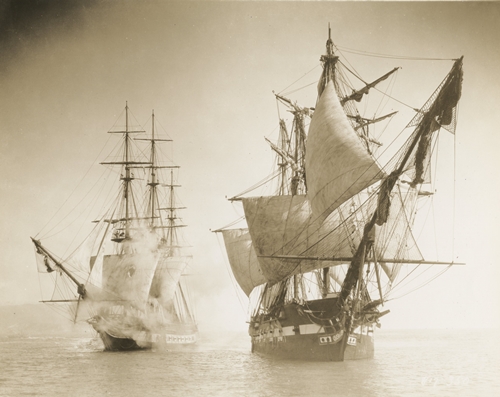 Following the title ship from its commission to its first great adventures, the film charts an indirect course to Old Ironsides’s Mediterranean victory over Barbary pirates by first boarding its fictional trio of non-commissioned heroes – boatswain Beery, gunner Bancroft, and first shipman Farrell – on the merchant ship Esther by means both foul and fair. Regarding the latter, the ship captain’s daughter, for whom the initial, ill-fated vessel is named, provides enough cannon-stock fuel to prod old sea salts Beery and Bancroft towards fair Esther’s rescue when her namesake is overrun and taken by the piratical enemies of the nascent US’s open seas. Escaping their foul clutches, courtesy of a daring plan enacted by the ship’s erstwhile cook (George Godfrey; impressive both for his physicalilty and performance as a real-life prizefighter and non-actor), the now quartet of sea adventurers join up with naval forces to (eventually) ram the USS Constitution’s not-quite-yet Old Ironsides through the pirate’s blockade and stamp the ship and its legend on the American military annals.

The silent sea adventure film – not to confuse which words qualify which in that grammatically ambiguous descriptor – is notable for many reasons beyond its involving story and epic scale. First and foremost, the trio of male stars carry much of the film’s appeal on their broad and brawny backs; their comic and dramatic interplay, especially when joined by the previously (and unfairly parenthetically) mentioned ex-boxing champ George Godfrey — rounding out the trio in the film’s final third to a welcome swashbuckling quartet — is never less than entertaining. But while the romantic subplot between Farrell and Ralston is (at least on this first viewing) easily overlooked, the battle scenes, with their seamless mix of model-work and to-scale recreations of the era’s litany of impressive ships (the equally storied Intrepid among them), still impress today (or, better yet, remain impressive). And the latter would undoubtedly impress more had one been lucky enough to catch a 1920’s screening: projectionists were encouraged to employ the lens-magnifying view called “Magnascope”, where the image expanded at key story moments to potentially twice its normal size. What the early wide- (or more accurately height-)screen, proto-IMAX in its dimensions, lost in resolution it undoubtedly gained in impact; the looming scenes of buckle’s swashing derring-do towering over its first audiences. 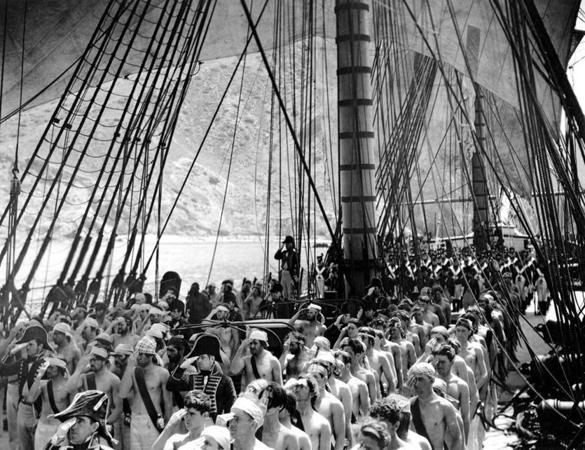 Kino Classics’ 2018 Blu-ray release of this 102-year-old, 114-minute 2K scan – from original 35mm film elements preserved by the Library of Congress – won’t expand the size of your TV to Magnascope heights but will unreservedly preserve much of the visual appeal, sense of adventure, and grand ol’ moviemaking scale of Old Ironsides. Sadly considered somewhat of a failure in its day (“sunk at the box office” already taken by KC’s blurb-description on the Blu-ray’s back cover), the USS Constitution receives its better due under its braver banner courtesy of a 41-minute commentary by film historian Toby Roan and a box-accompanying booklet essay by film scholar Peter Labuza. Roan provides his usual high level of vigorous research into the film epic’s epic production history – one really gets a sense of raw filmmaking scale equal to the unmistakable evidence of the screen – while Labuza’s informed essay sings the praises of the production’s unsung heroine, Dorothy Arzner. The latter is a fascinating Hollywood historical figure in her own right who steadily rose from typist and script-girl to, with Cruze, editor and scenarist to, eventually, male-dominated Hollywood’s possibly only female director in 1927 through 1940. The ample evidence of this film alone, then, makes this Blu-ray release inevitable companion/comparison piece with Kino Lorber’s currently indispensable Pioneers: First Women Filmmakers.

Best of all, however, is pianist Rodney Sauer’s interpretation of musical elements from J.S. Zamecnik’s and Hugo Riesenfeld’s original and compiled score, adapted from cue sheets also held by the Library of Congress and meticulously re-timed and re-scored to fit the film’s current length and restored frame-speed. Employing a leitmotif style for its principal characters – their individual themes woven throughout their appearances in the story – the more familiar martial tunes, patriotic marches, and sea chanties dramatically fuse the intimate with the epic and the personal with the historical. (Plus, the reviewer is always simply impressed by a musician playing a solo instrument for two solid hours and still being able to strike those trilling high note rolls with as much force as two hours before.) The best compliment one can give a silent film score is it will have one humming its images for days: Rodney Sauer plays Old Ironsides as if he were film-length ship-aboard.

The images above are used only as a reference to the film and are not meant to reflect the image quality of Kino Classics’ Blu-ray release.