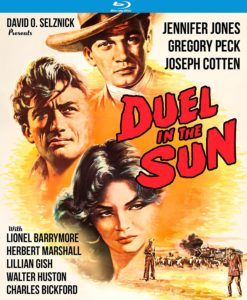 Duel in the Sun is The Biggest Movie Ever Made; an irresistible spectacle of Western drama for the ages.

At least, that what it was supposed to be. While it’s not altogether accurate to say it misses those marks, it does miss its intended target of overtaking Gone with the Wind as the new super-production for the ages.

Based on the 1944 novel of the same name by Niven Busch, Duel in the Sun was the grandiose vision of David O. Selznick, already a legendary über-producer in his time most famous for giving the world the said competition in 1939, Gone with the Wind. A man like Selznick could only truly succeed in his own mind if he upped his own storytelling ante in terms of lurid pathos and internal drama depicted, with an inflated budget and spectacle to match.

While Duel did end up selling a lot of ticket sales in its big roadshow rollout and beyond, it was not the kind of zeitgeist-permeating hit that it was supposed to be, even courting widespread mockery. Famously, due to its overt sexual heat (the film got shaved down prior to its release thanks to the jittery folks in the Hays Code office), the film is commonly referred to as “Lust in the Dust“, even to this day.

The movie, with its morally jacked-up males and females who wield their emotions like solar flares, could never have been a canonical masterpiece. Unable to capture the lightning in a bottle casting of Clark Gable and Vivian Leigh, director King Vidor made due with a mismatched but otherwise fine cast. 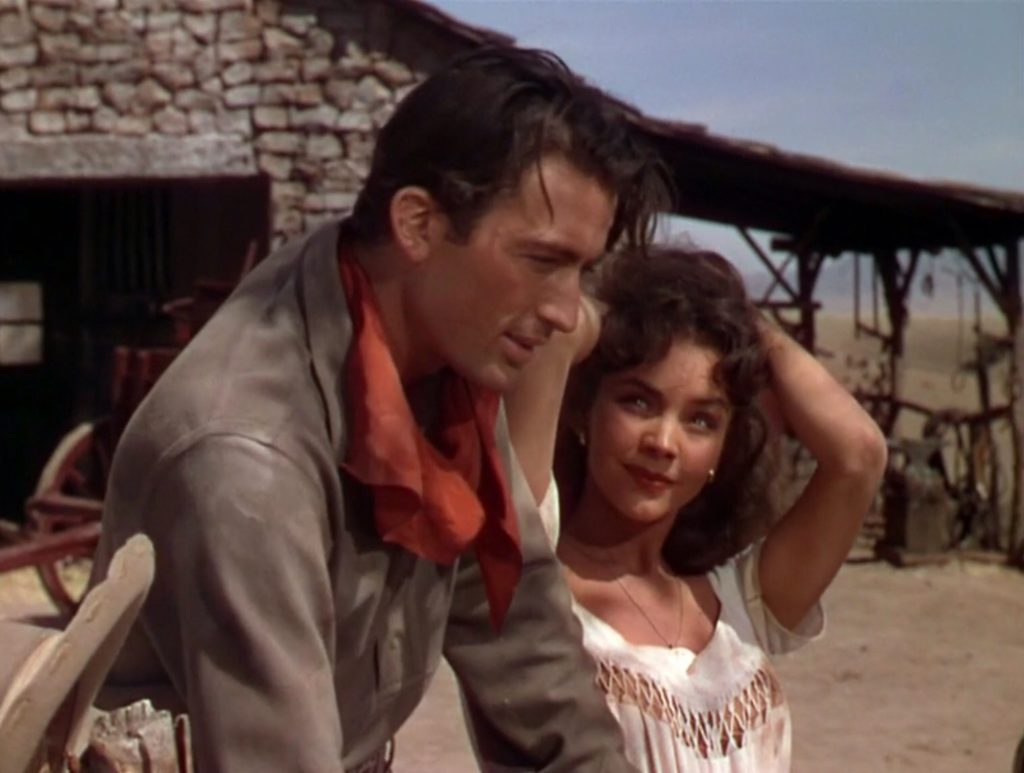 Gregory Peck and Jennifer Jones in DUEL IN THE SUN.

Gregory Peck stars against type as Lewt, a handsomely contemptible man who spends the film lusting after the hopelessly conflicted Pearl, a part Mexican, part American young gal played by Jennifer Jones. Jones, successfully spicing up her resume following her popular turn in the nun picture The Song of Bernadette, dominates the frame with her heaving, her simmering, her exposed shoulders.

Pearl, displaced to the wealthy homestead of an aging couple played by Lionel Barrymore and Lillian Gish, expresses her wishes to be “a good girl”, going as far as to take an appointment with “the Sinkiller”, a man of the cloth played by Walter Houston. But when Lewt arrives later, looking for a roll in the hay, she’s too weak to resist his unsubtle advances.

Whether it be the Old West or 1946 Hollywood, there was no woman’s liberation to be had for this isolated character. She‘s therefore left with no choice but to cope by writhing on the floor in a breakdown of both passionate fervor and guilt. To be sure, this is, even then, a most problematic depiction of female sexuality. With Jones herself the lone female in the creative mix, she obviously is doing all she can to keep her character from overheating in an inferno of hyper-focused, magnifying-glass-burning male gaze. So, she amps up the inner conflict in every shot. She is magnificent, one of a kind, and, to use a horrible term worthy of Lewt, damaged goods from the get-go. Altogether, it’s too indelible to dismiss, but too exhaustingly ludicrous to fully appreciate. Such is the case of Duel in the Sun on the whole. 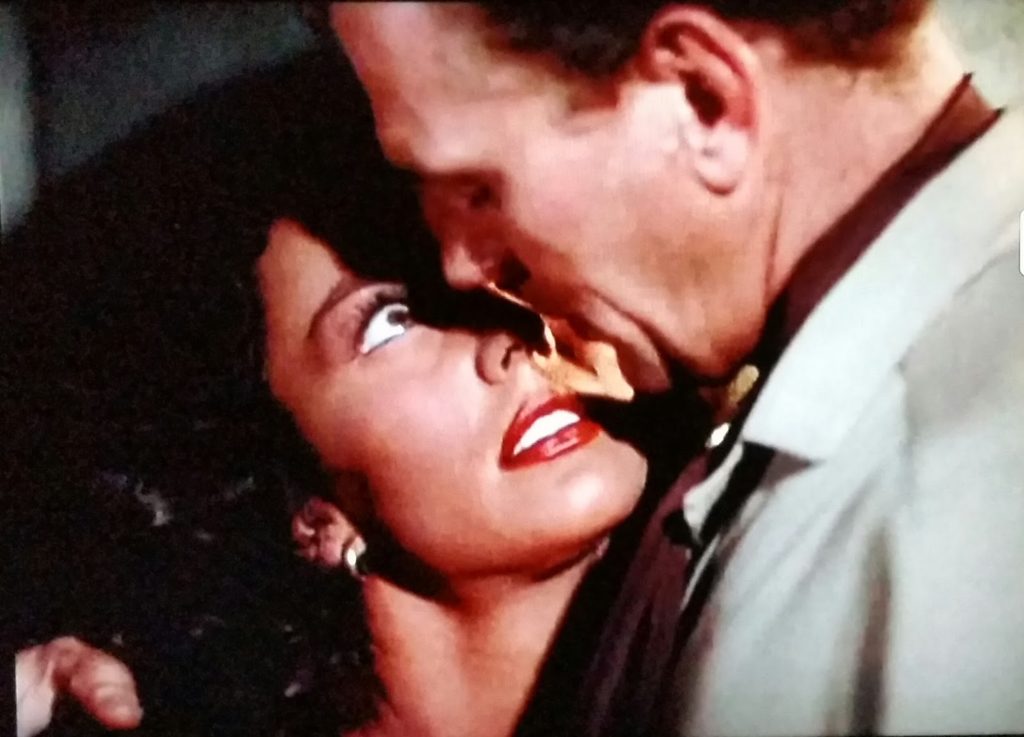 The venomous (yet uninteresting) drama of the central family, including a rift between Lewt and his brother, played by Joseph Cotton, and the turmoil that ensues with having Pearl around, runs roughshod over any pleasures the film has to offer. It’s fair to postulate that the problems with Duel in the Sun are mostly rooted in its very concoction, being a Western made by and for people with a low regard for Westerns. Where most good Westerns are rooted in the people’s relation to the landscape, this one opts to fill its landscapes with people, and the odd massive train derailment. But for all that, it remains a unique piece of work, and without question, a bold sensory and id-driven vision unto itself.

King Vidor, once revered as one of the few great directors of the silent era to make the leap to sound, is now more or less forgotten in the dust storm of time. But like his earlier films, The Crowd or The Big Parade, Duel in the Sun is an analogous super-production among super-productions. Vidor had it in him to tell small and intimate stories as well, but this was him unleashed… but actually quite leashed.

Predating the “psychological Western” of the 1950s (including but not limited to works by Anthony Mann and Fred Zinnemann) by a good few years, it‘s safe to say that Duel is not the prototype nor launch pad for those superior films. Selznick’s grand opus is far to consciously Freudian for that. With its torrid and surface-level tortured sexuality, Duel in the Sun is about as far from the oater programmers of John Wayne and his horse Duke as one could get. 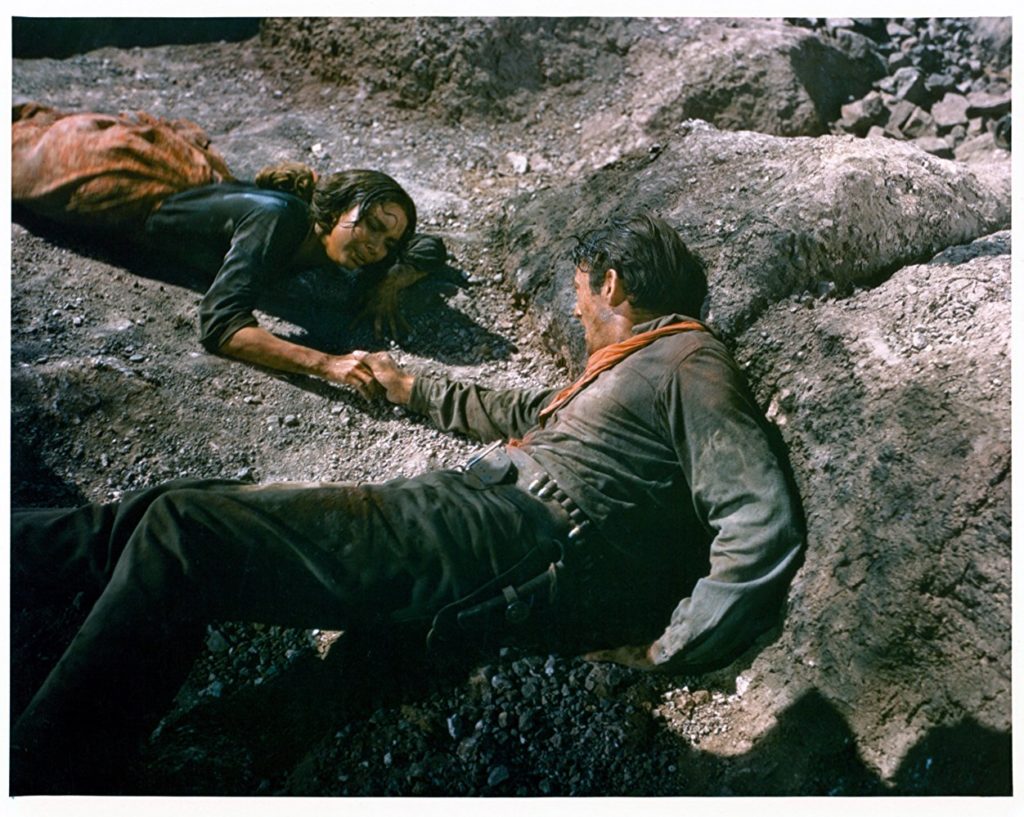 Whatever it’s pronounced strengths and weaknesses, we do have Duel in the Sun to thank for the cinema fixation of Martin Scorsese. In his exceptional, outside-the-box documentary A Personal Journey Through American Cinema, he proclaims his stunned amazement at the colors, the dynamism, the sheer spectacle of experience. It was the first hit of an invigorating and consuming lifelong drug that would lead him down the path of becoming not just one of the world’s top filmmakers, but also a key film historian and preservation proponent. He credits it as the first film he’d ever seen.

The new Blu-Ray of the film from Kino Lorber Studio Classics, presenting the full roadshow version with prelude, overture, and exit music, manages to play up Duel in the Sun‘s not-uncertain strengths. Namely, it’s striking visuals and wildly extreme use of color tinting. In choice moments, the visuals run so intense, so expressionistic, that the label of “Western Noir” is wholly justified. The implementation of blood-red ambiance and/or thick, contrasty shadows has never looked better on home video than it does here. Duel in the Sun is, if nothing else, has always been insanely glorious to look at. 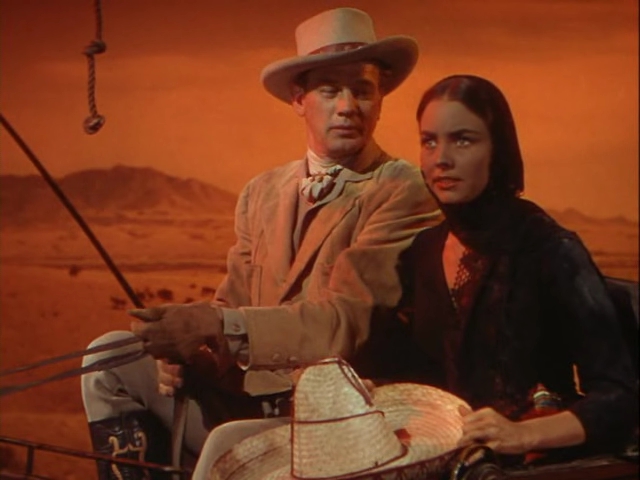 Besides a trailer gallery, the Blu-Ray also offers recent bonus interviews with Gregory Peck’s children, all of whom have interesting anecdotes among the assurances that their father was nothing at all like his character Lewt. There’s also a truly fine commentary track by film historian Gaylyn Studlar, who gives a fully engaged and engaging history and analysis of the movie. It’s a great, level-headed track, well worth checking out.

Although Vidor is credited as director, there’s little doubt at the end of the long day that it was Selznick who was calling the fundamental shots. The resulting film resides among the most essential of Hollywood misfires, this one still boasting plenty to offer, particularly for the viewer who’s willing to operate a la carte. With this release, Duel‘s time in the sun has finally dawned.