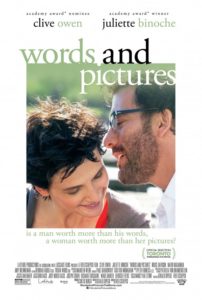 And with this simple statement, art teacher Dina Delsanto (Academy Award Winner Juliete Binoche) began a war with Jack Marcus (Clive Owen), a brilliant, yet troubled, English teacher.  Caught in the middle are a handful of students who find themselves in both Honors English and Honors Art at a prestigious private school where students are destined for places such as M.I.T.

Words, Mr. Marcus teaches us, are necessary for communicating our wants and needs.  They paint images and give description to things we have never seen.  Powerful words have established nations, as evidenced by the United States’ Declaration of Independence, and are the tool and weapon of rational thought, able to bring order to a chaotic world.

Art (especially through pictures), Ms. Delsanto counters, is a medium that not only appeals to one’s intellect, but can reach in and reach our emotions.  It can symbolize things that we cannot verbalize and takes us to a whole other place.  Art unifies us in ways nothing else can.

Both of these teachers are passionate about what they do, and truly believe in the power of their respective mediums.  And despite arguing to the contrary, both words and pictures are an art form seeking to make us all more understanding, more learned, and more open to truly be transformed.  In return, we are then able to use these tools to transform the world around us.

Unfortunately, the canvas where these art forms are practiced, are us.  Our lives.  Our thoughts and actions.  They are expressed through us.  And we are broken.  We are incapable of truly producing the better version of ourselves that we can see in our mind’s eye.  We try to paint it with our actions, but find our limitations are often working against us.  We try to verbalize what we truly feel but words fail us.  And this is the portrait we have of our two protagonists.  One is suffering from physical disability, and the other is self-destructing one drink at a time.

Words and Pictures is directed by Fred Schepisi, and as a film, it is able to weave a story that is equal parts romance, and inspiration, and balance it with brokenness, heartache, and humor.  While some of the plot can be predictable at times, these characters feel real.  We may not all be able to relate to their professions, but we can relate to their plight. Often in romantic comedy, the characters are two-dimensional where the goal of the plot is simply to bring them together.  Here, we refreshingly have a story that moves the characters in that direction, but not so they can simply be together. More importantly, it is so that their strengths, passions, and flaws can combine in such a way that makes them better people, and in return inspire us towards this same end.

What starts out as a playful game between two teachers seeking to inspire their students, becomes a larger challenge to show us the possibilities we possess as well.  Delsanto is relentless in her criticism of a student named Emily, driving her to be better.  And this is what is asked of us.  But to do that, we have to deal with our own fears, demons, and brokenness.  Always lurking is the dark version of our personality, that can easily upend it all in a moment’s notice. Throughout the film, we have a front-row seat to this darkness.  Each character has a part of themselves that is destructive to their potential.  Both the teachers, the students, as well as others demonstrate the potential that resides in all of us, and we also see the way their pride, and destructive tendencies can sabotage our best intentions.

On a weekend where you have a strong science fiction, action film starring Tom Cruise and Emily Blunt (see Dave Henry’s review of Edge of Tomorrow here), and a film based on a popular book, The Fault in our Stars, Words and Pictures runs the danger of being lost in the shuffle.  But as good as the first two mentioned films are in their own right, Words and Pictures manages to be a brilliant example of counter-programming that will please the audience that finds this film.

And while the film is ultimately about communication, intellect, and emotion, it is also about realizing that despite being an insufficient canvas, we still have the ability to capture the emotions that are indescribable.  We can express thoughts and feelings that have never been described before, and in both, when words and pictures are working together, we can find that we’re all made of the same stuff and need the balance of the other to bring all of the fullness of this life to its ultimate potential.